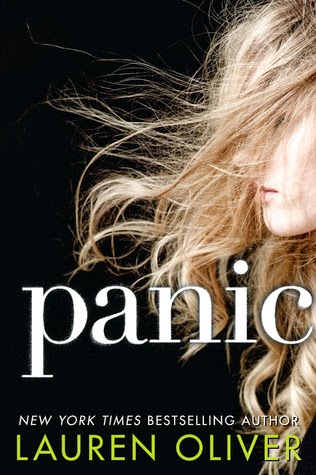 Panic began as so many things do in Carp, a dead-end town of 12,000 people in the middle of nowhere: because it was summer, and there was nothing else to do.

Heather never thought she would compete in Panic, a legendary game played by graduating seniors, where the stakes are high and the payoff is even higher. She’d never thought of herself as fearless, the kind of person who would fight to stand out. But when she finds something, and someone, to fight for, she will discover that she is braver than she ever thought.

Dodge has never been afraid of Panic. His secret will fuel him, and get him all the way through the game, he’s sure of it. But what he doesn't know is that he’s not the only one with a secret. Everyone has something to play for.

For Heather and Dodge, the game will bring new alliances, unexpected revelations, and the possibility of first love for each of them—and the knowledge that sometimes the very things we fear are those we need the most.

Well, this book wasn't what I expected. I thought this book would be something like Epic by Conor Kostick, in which the game is a video game that people play, but that affects real life. Nope nope nope. Panic is an actual game in which people of Carp, New York, play after high school graduation. Only high school seniors play, and it's an actual game, in which you do things like jump off ledges and walk a tightrope and face tigers. It's weird. I guess you could kind of equate it to The Hunger Games, except you're living in your town, you're living your everyday life, but there are tasks that pop up every few days that you have to complete.

I honestly don't know how to feel about this book. I read it, I finished it, I powered through it. I felt no connections to the characters. I could care less about the romance. I had no interest in the game of Panic. I don't understand the game. Really, I'm in a state of apathy. I don't care enough to hate this book, so I suppose I dislike it a lot. I really just don't know. Moving on.

Boring. Boring boring boring. This book was really boring. I mentioned above my state of apathy. Well. I was apathetic mostly because I was bored. I feel so proud of myself for finishing this book because WOW, it was boring.

This book is all about Panic (duh), a game in which Heather, Nat, Dodge, and many other high school seniors participate. The prize is a pot of thousands of dollars. Teens complete crazy tasks, created and judged by two unknown judges, and the last one standing wins the pot. This book is told in the points-of-view of Heather and Dodge, but don't let that fool you - they're not the romantically involved couple.

So, this book follows Heather and Dodge. Both are trying to win. As are many other teens. Gosh, this book was so boring. The synopsis tried to make it sound mysterious and twisted and interesting. Nope - it was boring and superficial and predictable. And the parts that weren't as predictable were weird and not plausible. Like, Anne (Annie?) and her zoo? Um, yeah NO.

Honestly, I could have cared less about Heather and her conflicted feelings towards Bishop. The same goes for Nat and Dodge. The romance in this book is so dry and distasteful. At first, I was like, go Heather and Bishop! And then after a while, I really did NOT care. In the Delirium series, there was TOO MUCH romance (there was a love triangle, I hear). In this book, the romance is not enough. It's too sparse and uninteresting.

By the way, I read Delirium. I actually liked it, mostly. But then I read and heard things about Pandemonium, and then Requiem, and I was like NOPE, not reading this series. So I don't have definitive facts for you when it comes to that series (though I do not for sure about the love triangle), but I can tell you know, Panic did not redeem Lauren Oliver in my eyes. I gave her a second chance (with this book), and I really did not enjoy this novel.

So the plot's bad (boring). The characters are bad (flat). The romance is bad (uninteresting). And the reader is apathetic (never a good sign). This just doesn't sound like a good one, does it? It wasn't that I absolutely loathed this book or anything. It's just that I cannot summon any emotion towards this book - maybe distaste, at the most. A little bit of pride, for finishing it.

Because let me tell you, people. I was in danger of not finishing this book since like, page one. I have never NOT finished a book before, but like I've said in previous reviews of books to which I gave low ratings, this could have been my first one. I did it though - I finished! So I've give you a fair review of this book - not a DNF review, or a half-created review.

Anyway, that's all I've got. I don't know what else to say. I really did not enjoy this book, mostly because it was boring and I just did not care.

Errr, no. Not at all. This book was really not that great. I definitely expected more from such a popular author, but that goes to show, popularity does not mean quality. No offense, but this book was NOT quality (in my opinion, of course).

1.5 stars -> rounded down to 1 star. This book really just was NOT for me. Suffice it to say, I'm not a fan of Lauren Oliver's books.