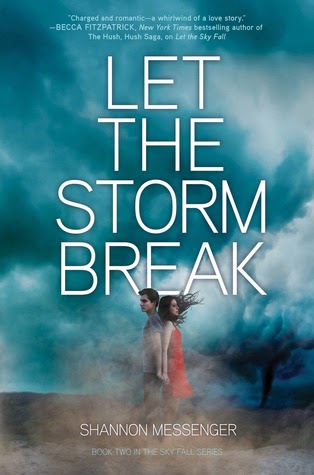 Whirlwind romance and breathtaking action continues in the sequel to Let the Sky Fall, which Becca Fitzpatrick called “charged and romantic.”

Vane Weston is haunted. By the searing pull of his bond to Audra. By the lies he’s told to cover for her disappearance. By the treacherous winds that slip into his mind, trying to trap him in his worst nightmares. And as his enemies grow stronger, Vane doesn’t know how much longer he can last on his own.

But Audra’s still running. From her past. From the Gales. Even from Vane, who she doesn't believe she deserves. And the farther she flees, the more danger she finds. She possesses the secret power her enemy craves, and protecting it might be more than she can handle—especially when she discovers Raiden’s newest weapon.

With the Gale Force weakened by recent attacks, and the power of four collapsing, Vane and Audra are forced to make a choice: keep trusting the failing winds, or turn to the people who've betrayed them before. But even if they survive the storms sent to destroy them, will they have anything left to hold on to?

I binge-read book one and book two back-to-back, in two days. It's AWESOME, because I wasn't as likely to forget information from book one (which always happens when waiting between books, for the next book). But the flip side is that events from book one and book two kind of run together. It's like reading one long book over two days. I can't imagine what will happen when I go to read book three, but I'll cross that bridge when I get there.

I don't think this book fell victim to the sequel slump, but it definitely wasn't fulfilling as I had hoped it would be. I'm hoping I pinpoint exactly why I feel that way, by the end of the review, because I'm not entirely sure what more I wanted from this book, I'll get there in the next section though.

Vane and Audra survived the showdown in book one, and they are bonded (much to the remorse of the entire Windwalker kingdom and a certain heir). But there are bigger problems than that. Raiden will be back, and this time, with a terrifying new set of power. With Audra still away, and Vane not sleeping, and the threat of Raiden looming, things are not looking up for the Gales.

As with book one, I really liked the split dual perspectives. And also as with book one, I liked Vane's voice more than Audra's. Vane is just so much more interesting than Audra - and he is NOT full of BS (like I think Audra is). Vane has a very unique personality, and I like it. Audra... she's full of s*** sometimes, which makes me mad. She wallows in excuses. I'll tackle that later.

A step up (and yet, a step back) from book one was the action. At times in this book, there was a TON of action. At other times, there was not. For example, the first part (half?) of this book was sort of slow. Things were happening, like with Arella and Vane's sleeplessness and his duties as king, but then things weren't really happening. Audra left and was trying to piece herself back together (or whatever), and her plot (when she was apart from Vane) was very boring. Boo.

But then things did happen. There were two sort of climaxes, both involving battle-ish scenes. That was exciting (mostly). I liked that this book became more involved in the grand scheme of things, which is what a second novel in a trilogy should do. Props to Messenger on that one.

The romance is still relatively uncomplicated. If you read book one, then you know that Vane and Audra are bonded, but that the Windwalkers totally wanted Vane to marry Solana, the daughter of the former king of the Windwalkers. Vane is totally in love with Audra, and Audra loves Vane, so that's that. Solana doesn't love Vane, but you can't help but feel bad for the girl that always knew (and was forced to accept) her fate.

The ending is pretty... killer, in my opinion (absolutely no pun intended, don't take that phrase the wrong way). It's definitely some sort of cliffhanger, and I don't really like cliffhangers in sequels of trilogies. But it's okay, I'll wait another year... sigh. The author would NEVER do something so extreme - but of course, Veronica Roth did, so why not?

As I mentioned before, like in the first book, I wasn't Audra's biggest fan. Don't get me wrong, I hope that she and Vane get their happy ending and ride off into the sunset and blah blah blah. Vane loves her, and for that reason, I like the pair of them together. But her as a person? Her personality? Her being? Eh. Not a fan. She wallows in self-pity, in my opinion. She wants to seem tough, but she's not really all that tough.

Also, she seemed to be gone for like, half the book. Maybe not half. But a significant percentage of the book. And all she was doing was having a pity party, and then ran into the wrong crowd, and then things started happening, and so on. But like, I don't cut her any slack. She's a bit wimpy, and she seems to like excuses, and then she gets weird and jealous any time Solana is even remotely related to anything involving Vane. Like STOP.

And I'm a bit confused on the logistics of the Living Storms... but I'm just going to go with it and pretend like I know how they're made. I understand who they were, their purpose, and the power, but I don't really understand how Raiden made them into what they are.

Somehow, this novel just didn't seem as satisfying as I'd hoped. I liked book one, and I wanted to be blown away (hehe, wind pun) by book two. Book two wasn't better than book one by any means, but it wasn't totally worse of anything.

If you read and enjoyed book one, then it's worth it to read this book. The way I look at it, with this particular series, is that if you read and enjoyed book one, you might as well read book two, because I have a feeling that book three will kick some butt. Hopefully. I could be so wrong though. If you have not read book one, then don't worry too much about reading book two. Read the entire series when it comes out, maybe. Or not at all.

3 stars. I was hoping for more, but didn't get more. However, I am really curious to see how it all ends!