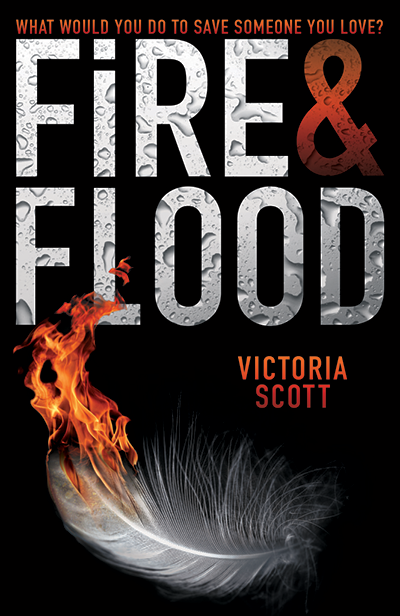 A modern day thrill ride, where a teen girl and her animal companion must participate in a breathtaking race to save her brother's life—and her own.

I just KNEW I would love this book - and I really did! Victoria Scott wrote the fabulous Dante Walker series (The Warrior, final book of the trilogy, out in May 2014!), and I am a huge fan of that series (take a look at my blog's left-hand sidebar... yup). I had a feeling that I would enjoy this new book of hers - just from what I know about her, her previous series, and also the sound of this book.

I was not disappointed! I'm so happy to say that the hype and buzz surrounding this book did not let me down. Usually when a book is highly popular before it is released, I'm wary. I'm usually one of the Debbie Downers that hates the book that everyone loves. But that wasn't the case with this book.

When Tella gets the call to enter the Brimstone Bleed in order to fight for a cure for her brother, she does not hesitate to leave her home and go. But she is not expecting to cross a jungle and a desert, fight off other people, and keep track of Pandoras - scientifically created animals with unnatural abilities, given to help their designated Contender.

But there is something eerie about the Brimstone Bleed. Why does it exist? Why is everyone fighting to save a family member - why are so many people sick with a nameless and incurable disease? There is so much more at stake than surviving in the wild. Tella and other Contenders form a group in order to survive, and Tella realizes that it's just them against her, fighting for the same prize.

I must say, I was quite happy with the pacing and plot of this book. Not once was I bored, nor did I have to put down the book to absorb content. I literally read this book in one straight shot. I found myself completely drawn into the story, completely sucked in. Scott didn't have lagging scenes, or action scenes that moved too quickly. I was never totally confused or lost, nor was I ever halfway asleep.

The plot is all about surviving in jungle (and then the desert), but it's also about finding out why things are the way they are. I liked that we not only get to read about Tella's journey and struggle to each base camp, but we get to slowly realize what is horribly wrong with the Brimstone Bleed (not that we didn't know something was wrong). Scott throws curveball after curveball - some predictable, others not so much.

I like that the romance is NOT the center of this book, nor does this book revolve around the romance. In her other series, Scott seems to base the book around Dante and Charlie's relationship. In this book, Tella and Guy barely do anything, romantically, and feel anything. And yet, their relationship is strange and complex, lust-filled yet driven by deeper emotion. I like that the romance is like an underlying current in this book: it's there, but it's not the point of the series, nor does it drive the series.

Tella is a girl that I think I would like, if she were real. Granted, she seems very shallow at times, wanting manicures and pedicures and massages and feather boas and things that I really do not care about. I'm not totally girly like that, but I like her strength of character. Like, she seems ditsy, but she's also compassionate.

Guy is a mystery. We don't get a very good read on him in this book. To me, he seems like a very flat secondary character. He should NOT be a secondary character - he should be a protagonist - and he should NOT seem flat. However, I'm giving Scott the benefit of the doubt on this one - hopefully, we'll see more of a dynamic Guy in the books to come.

I really like the idea of the Pandoras. That was unique and quite fresh, and very appealing. Madox is adorable, but he is also super fierce and loyal. I'm curious about his abilities (I know there is more to come, I just know it). I hope the rest of the books keep featuring the Pandoras!

I LOVE the writing style of this book. That was one thing that was consistently on my mind as I was reading this book. Scott inserts humor into this book in the form of Tella's inner voice, and it is HILARIOUS. Some of the lines are just ridiculous - and I love it. Scott's writing style is just so fluid and the voice is so silly at times, and it totally works. I LOVE the humor in this book.

Overall, this is a solid start to a new series. I was pretty impressed, upon finishing this one. I cannot wait to read the next book!

Hmmm, I don't think there was anything specific that I did not like. I really enjoyed this book, from cover to cover. I read it in one sitting, and I wasn't bored - but rather, I was sucked in!

It's getting 4 stars only because this one didn't WOW me, and it's not a new favorite or anything. It's fabulous, I really liked it, and I definitely will be reading the rest of the series. BUT, it's not soooo amazing that I'd give it five stars. Yes? Yes.

I really enjoyed this book, so I must say YES, I would recommend it! I've seen it compared to The Hunger Games many times, and honestly, I can see it, but at the same time, it is SOOOO different. Scott really has made this book unique, and her own. So, ignore the comparisons, because this book is kickbutt, all by itself!

4 stars. I love Scott's Dante Walker series, and I know I'm going to love this new series! Definitely make this novel a must-read pick of 2014 - you won't regret it!