Review: Something Strange and Deadly by Susan Dennard 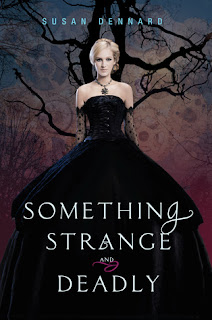 The year is 1876, and there’s something strange and deadly loose in Philadelphia…

Eleanor Fitt has a lot to worry about. Her brother has gone missing, her family has fallen on hard times, and her mother is determined to marry her off to any rich young man who walks by. But this is nothing compared to what she’s just read in the newspaper—

The Dead are rising in Philadelphia.

And then, in a frightening attack, a zombie delivers a letter to Eleanor…from her brother.

Whoever is controlling the Dead army has taken her brother as well. If Eleanor is going to find him, she’ll have to venture into the lab of the notorious Spirit-Hunters, who protect the city from supernatural forces. But as Eleanor spends more time with the Spirit-Hunters, including their maddeningly stubborn yet handsome inventor, Daniel, the situation becomes dire. And now, not only is her reputation on the line, but her very life may hang in the balance.

I cannot believe how long I waited to read this book! Like, I feel so stupid. I've had this book for more than a year, and I neglected to read this book. There are so many books that I want to read, like this one, but I never got to it. But I finally got around to it, because I got an Advanced Reader Copy of A Darkness Strange and Lovely.

Eleanor's brother is missing. He hasn't come home from New York, and Eleanor is worried. So, she goes to check and see if a telegraph was sent - and a zombie attack happens. The Dead flock the post office. Sounds like quite the opening scene, right?! I thought so. Immediately, Dennard brings the action, zombies, and craziness. It's a great scene to begin the book, because readers get a feel of the tension and mood of the setting. Not an easy feat, but Dennard did it!

Well, her brother is still missing, and while Eleanor was attacked in the post office, one of the zombies gives a letter to Eleanor - from her brother. This means that the zombies have her brother, or whoever is controlling them has him. Eleanor goes to the Spirit Hunters for help, and our story begins.

I really liked this book! I can't believe I put off reading it for so long. I love historical fiction, and this book is an amazing historical fiction novel. It's set in the 1800s, and readers are constantly reminded of this. The mode of dress, the speech, the somewhat arranged marriages, the regression of women's rights... Dennard keeps bringing about Eleanor's pending engagement and marriage, which is a great way to remind readers that the romance in historic times had many different barriers - some very different from today.

Speaking of romance, we have Eleanor and Daniel. I really like Daniel - he isn't the typical YA hero. I suppose because he is a historical fiction character, and not a contemporary character, there MUST be differences, but I feel like even then, Daniel is different. A good different. I love his mercurial temper - it reminds me of my own. That might not be a good thing though.

Anyway, the plot of this story is very interesting and engaging. I like how Dennard ended this book - it's not a pretty ending, physically or emotionally, but it's a fitting ending. The climax is very exciting and heart-stopping, and the ending is a straight slope down. I like this! Bring on book two!

At this point, I can't remember anything in particular that I didn't like. Perhaps Eleanor's mother? I think that her character is so terrible and I HATE her, but that just shows how good of a writer Dennard is - she has readers feeling something towards a secondary character.

I can't exactly justify why this one gets four stars instead of five - it just feels like a four-star novel, instead of a five-star novel. That's not a bad thing though!

I would totally recommend this book! Go zombies! Dennard's version of zombies is sensational and creepy and epic, and I don't care how many zombie books you will read in the future - READ THIS ONE! Anyone who enjoys zombie books, historical fiction, or just reading, will like this book.

4 stars. I am so glad that I finally got around to reading this book! Susan Dennard is amazing!