Review: The Scandal in Kissing an Heir by Sophie Barnes 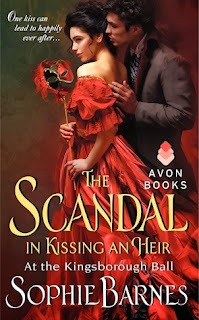 The Scandal in Kissing an Heir by Sophie Barnes
Book Two of the At the Kingsborough Ball series
Publisher: Avon Books
Publication Date: December 31, 2013
Rating: 3 stars
Source: eARC from Edelweiss

He is the next Marquis of Wolvington…
She is a lady with nothing but beauty and wits…
Together they share a forbidden kiss.

Lady Rebecca is determined to find a husband on her own terms, rather than marry any of the aging suitors her greedy aunt and uncle foist upon her. Her chance comes at the Kingsborough Ball, where she meets several potential grooms…yet no one compares to the dangerously handsome Daniel Neville.

Daniel Neville, notorious rake and heir to the Marquis of Wolvington, is in need of a bride, but finding a lady who’s willing to accept his past, is an entirely different matter. When he spies a stunning woman across the ballroom, Daniel believes he’s found her…until scandal erupts around them. How can he convince Rebecca to take a chance on him…and on the love that could be theirs forever after?

Book one of the series is based loosely on the story of Cinderella (I believe it is - that's what I think, but I don't know for sure), and I believe that this book, book two, is based on the story of Rapunzel! I thought that was so cool! Rebecca was stuck in a tower for two years - everyone believed her to be mad. In reality, she was faking madness to put off getting married, because her aunt and uncle would have arranged a marriage for her long ago.

Well, after Rebecca gets caught at a ball (where she and Daniel meet), she is forced to face marriage. With the prospect of marrying the slimy Duke of Grover thrown in at her, she agrees to marry the title-less Daniel Neville - they will elope. It's a good plan, because Rebecca wants to get out of marrying the Duke of Grover, and Daniel needs to get married to show his uncle (a marquess) that he is quite serious about inheriting the title of the Marquis of Wolvington.

Of course, things don't always go according to plan. Even if they do get married, Daniel and Rebecca will cause great scandal, causing the ton to go in an uproar, angering the Duke of Grover, Rebecca's uncle and aunt, Daniel's uncle and aunt... lots of things could go wrong. And they do.

For the most part, I enjoyed this book. Daniel and Rebecca's relationship is definitely not typical of a historical romance novel. They have it a little backwards - they want to get married first, and then get to know each other, and fall in love. It works, in this book. I didn't always feel the chemistry between these two, but by the end of the book, I could definitely understand that they were in love.

I wasn't super pleased with the plot of this novel - I thought it dragged (see below), but I did finish this novel, so I consider that a success. It was interesting to push me to finish the book - I was invested enough in the story to want to know what happened in the end!

The end was a really nice end. Everything wrapped up extremely nicely. I keep forgetting that this book runs directly parallel to the first one - both books start in the same scene (the Kingsborough ball). Well, the beginning is very cool, and the end of this one is a great ending.

For the most part, I enjoyed this book, and got through it pretty quickly, but one of the things that bothered me was that this book definitely dragged along, especially in comparison with the first book. I was a little bored at times, and it made it difficult to keep reading. I put this one down several times, because I didn't think I had it in me to finish.

It's not to say that I wasn't interested in this book - overall, I really wanted to know how Barnes would wrap up this story. Maybe it was the timing in which I decided to read this novel, or maybe it was the novel itself, but it wasn't as interesting - scene to scene - as most historical romance novels that I've enjoyed are. Like, each scene couldn't hold my attention. In general, this book caught my attention, and I enjoyed it, but the specific scenes and events of this novels weren't that interesting.

Like, I feel like there was a lot of internal monologues, descriptions, contemplation, etc., but not enough dialogue, action, and quite frankly, chemistry/hot scenes. I didn't really feel the chemistry between Rebecca and Daniel until the actual scenes, and then it was an explosion of chemistry.

Also, the dialogue seemed weird. It was almost too modern at times. Like, I understand that the author doesn't want to ALWAYS use stuffy Old English speak, but you can't just insert modern-day slang into a historical romance novel. Keep the anachronisms out of the speech!

This one is definitely worth the read, if you read the first book and enjoyed it. But I wouldn't mark this one as a MUST-READ-OR-ELSE. It's definitely not one of my favorite historical romance novels of the year, so it wouldn't be a go-to recommendation (like its predecessor), but it's still a good read.

3 stars. Not as amazing as the first book, but still a pretty good novel nonetheless!