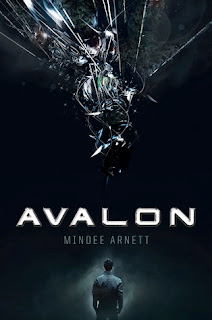 First things first: I have never watched the show Firefly. I don't even know what it is about. So, don't expect me to compare this book to Firefly, or point out potential references or similarities, or whatever. Just saying.

Anyway, I really liked this book! I was terrified that I would seriously dislike this book, because it seems that books that I wait FOREVER to read are the ones that end up disappointing me. In general - not always. But I put off reading this one for quite some time, because I didn't want to be disappointed. And honestly, not too far into this book, I thought I was going to be disappointed.

But I wasn't! I kept reading. If you're having trouble finishing or reading this book, trust me, it gets better. I like to see this book in terms of quarters (the fractions, not the coins or the time in football). The first quarter was fantastic - definitely a great hook into the novel. The second quarter was kind of brutal. But the last two quarters (second half, whatever) required a little bit of powering through, but got interesting as they went along.

So. Jeth and his crew have a new job from his boss, Hammer: take Avalon (the ship that rightfully should be Jeth's, but was gambled away by his uncle), and go to the Belgrave (think: Bermuda Triangle) to find a ship lost for two months. Bring it back, don't board it, and there is a huge payout. Sounds like a plan? Except everything goes wrong. Starting with the fact that there were living beings on the ship, and Jeth decides to board the ship.

The plot was very engaging, once the twists and turns began. Those twists and turns didn't really began until Jeth, the crew, and the three human beings left on the lost ship are close to leaving the Belgrave. Then, something happens, and THAT'S when this book really had my attention.

You see, the beginning was great. I was hooked. Arnett did a really good job of setting up the background, the world, the characters, and fear of Hammer, the fear of the ITA, and so on. The opening scene is pretty epic. But then the second quarter of the book is kind of boring. I didn't want to keep reading, I was so bored. But then that thing I mentioned happened, and I was like, I'm checked back in!

The second half of the book is just twist after twist, and I loved this. Arnett doesn't really give you a chance to figure out EVERYTHING, which was nice. I liked this change of pace. The first quarter of the book was great, but you could predict what could happen next. The second quarter was suspicious, but boring. The last two quarters were perplexing and filled with nonstop action and guessing.

I really, really like Jeth. This book is written in third-person limited - the "limited" being restricted only to Jeth. So, it's kind of like this book is written in Jeth's point-of-view, but in third person. I love this type of perspective. And I love the character of Jeth. His character development is subtle but remarkable. The amount of obstacles that Arnett puts him through... wow. He's definitely someone that I would respect and most likely be friends with, if he were a really person. We'd get along swimmingly!

There is romance in this book, but I liked that Arnett kind of keeps it to a minimum. She doesn't overdo the romance, making it this giant THING in the book, making its plot overtake the actual plot that deals with the ships and Hammer and Renford. I like this type of romance - the type that grows as the book goes on, but doesn't make or break the book. Too many YA series these days are solely based on a romance, with half of the readers going with Team Dude A, and the other half going with Team Dude B. That's silly.

And no love triangle, YAY! That made me happy.

Overall, this book is definitely worth picking up, borrowing, buying, asking for Christmas, for a birthday, you get the idea. I wouldn't miss it, especially if you're a science fiction fan, like me. This book is heavy on the science fiction - appealing to my engineering nerdy side!

So. If you've reached the part after Jeth gets his new assignment, to about the part where Jeth, the crew, and the three new people are about to leave Belgrave, and you can't seem to find anything interesting, POWER THROUGH IT. Because that's the worst of it - "worst" meaning boring.

I would! This science fiction novel has a little bit of everything for everyone! Except a love triangle. Thank goodness there is no love triangle in this one. But seriously, I'm a science fiction fan, and I really like this book. I'm not sure how different types of readers will react to this one, but hopefully, this novel won't just be for fans of science fiction!

4 stars. This one definitely lived up to my expectations! I'm so glad that I ended up enjoying this one, overall. Bring on book two!