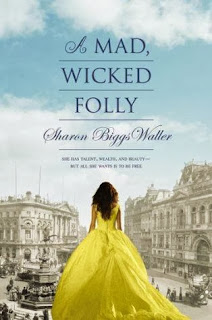 Welcome to the world of the fabulously wealthy in London, 1909, where dresses and houses are overwhelmingly opulent, social class means everything, and women are taught to be nothing more than wives and mothers. Into this world comes seventeen-year-old Victoria Darling, who wants only to be an artist—a nearly impossible dream for a girl.
After Vicky poses nude for her illicit art class, she is expelled from her French finishing school. Shamed and scandalized, her parents try to marry her off to the wealthy Edmund Carrick-Humphrey. But Vicky has other things on her mind: her clandestine application to the Royal College of Art; her participation in the suffragette movement; and her growing attraction to a working-class boy who may be her muse—or may be the love of her life. As the world of debutante balls, corsets, and high society obligations closes in around her, Vicky must figure out: just how much is she willing to sacrifice to pursue her dreams?

I don't even know where to begin with this one! I requested it on a whim, honestly. I didn't really know what it was about, only that it was marked as "historical fiction" on Goodreads, there was romance (though it appeared to be a love triangle - yikes!), and the cover is pretty awesome. But this book ended up surprising me, in the best of ways! I love historical fiction, but I don't read nearly enough historical fiction set in the 1900s. This was a good one!

So. Vicky is sent back to London, after getting caught posing nude for her art class. Quickly, her parents try to rectify her scandal. She is forced into an engagement with an actually not bad young man - a good-looking, rich, nice, young man. She is forced to go to another school, where she must learn to dance and curtsy and whatnot. Her parents don't want her drawing or sketching - they detest her art, and they refuse to let her go to an art college.

That does not stop Vicky from applying to RCA (the art college), and in fact, she wants to get married to Edmund, because he is rich, and can pay for the college's tuition. But things don't go as planned. Vicky gets caught in a suffragette mob, and gets arrested by the handsome William Fletcher. Strangely enough, after the arrest, she and Fletcher develop an odd friendship, and begin seeing each other. Vicky draws for Fletcher's novelette (stories), and Fletcher poses for Vicky.

But the suffragette movement is HUGE in this book, and it does not just go away. While Vicky accidentally got arrested for being in the wrong place at the wrong time, her "involvement" does not stop there. Eventually, she begins painting and drawing for the suffragettes. Women around her are suffragettes - people she would never have seen or thought to be.

I really like Vicky, but I especially like her character development. In the beginning of the novel, she is rash and dramatic and silly. All she cares about is her art and going to art college. By the end of the novel, she realizes just how much those things mean to her, and she makes concessions for those things. She gives up things, important things, in order to have a clear view of the future. Vicky at the start of the novel wouldn't have thought about the future in the same way that Vicky at the end of the novel does.

The romance in this book is interesting, to say the least. Vicky is forced into an engagement with Edmund, but there is nothing there. However, the entire book is spent with Vicky being engaged to Edmund. That's part of the plot (along with the suffragette movement). However, Vicky's heart truly belongs to one police constable - Will. I love the decisions that Vicky makes throughout the novel, involving Will. Some are very mature and grown-up, even if they are difficult.

The suffragette movement is a poignant part of this novel, and I love how Waller depicts it. Keep in mind, it is the suffragette movement in England, NOT in the United States. Waller makes this plot important, but not overwhelmingly so. Vicky becomes braver as the novel goes on, but she does not become a martyr, or something that she is not (or never will be). Yes, Vicky makes crucial decisions that impact the movement in small ways, but the author does not make Vicky anything that she is not (nor will be).

But I think Waller did a great job of portraying this HUGE historical event. I have to hand it to her - she did her research VERY well! And the extra information in the back of the book is awesome and much appreciated!

I don't know what you all are thinking, about this book and its plot, but trust me when I say that the ending is very real, and it's... it's a good ending. Vicky really has to grow up, in the last part of this book, but the ending is definitely fitting of this growth. I liked it! I liked this book very much.

One thing that really stuck out to me was the slow beginning. Like, the first 100 pages or so are soooo slow. I contemplated not finishing this book (would be a FIRST for me, EVER), or pushing off, even though I had my review slated for today (the 22nd). I started reading this book on the 20th, and didn't get very far (maybe 40 pages?). I started again on the morning of the 21st, and I found that I could NOT get into the book.

But, me being me, I don't just not finish books, so I pushed through the first part of the book. Things started to pick up, and I began to become interested in the story, so then I started worrying about finishing in time for the 22nd and writing the review, and started actually reading.

But seriously, the beginning was slow. If you are reading this book, and are considering not finishing, keep going! It gets better!

And even if you don't like historical fiction, or don't read much of it, I promise you that this is a good read! It's lengthy, but it's worth every page.

4 stars. I'm so glad I took a chance with this novel! Now that I've actually read it, I can't believe I ever considered NOT reading this book!