Review: Defy by Sara B. Larson 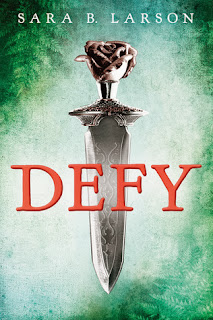 When I opened this book, I experienced some intense feelings of dread, to be completely honest. You know when you've been waiting to read a book for so long, and when you finally get your hands on it, you're like, oh no, I hope it's amazing! Like, my expectations for this book were so so so high, and when I finally got an ARC, I wasn't sure if I wanted to read it, because I didn't want to be disappointed!

Does that make sense? I hope it does. Well, anyway, clearly I was NOT disappointed - thank goodness! I really enjoyed this book, and I'm glad I didn't panic or chicken out or anything. I was so afraid that I would not like this book for some reason or the other - after waiting so long and being so excited for so long, doubt can do that to a person.

Fantasy is my favorite genre, and Larson does this genre justice. Alexa is pretending to be "Alex" a male teenager and fighter, personal guard to the prince. Things aren't going horribly for Alex - everyone is convinced that she is a male, and she is a really, really good swordsman. But all of that changes when whispers of sorcerers start to go around, and the war becomes reality.

Suddenly, Alexa finds herself captured, along with Rylan (her best guard friend), and Damien (the prince). But both Rylan and the prince have kept things from her - the prince especially. The prince is not the aloof, arrogant man he seems to be, and both he and Rylan know more than they let on. The prince has everyone caught in his web, to take down his father, the king.

Most fantasy novels involve a war, a tyrant, a handsome prince, and so on, so I expected all of that. What made this novel unique is many things - all of the betrayal, Alexa's real being, the rawness of the writing style... let me tell you, the writing style is AMAZING. I don't know how to describe how I feel about it, but Larson has a way with words, literally. Like, there are some scenes that you can just FEEL the pain, sorrow, agony, indecision, and so on. That really resonated with me in this particular book, more so than most books.

I liked Alexa! I think she is a great heroine. She's brave, determined, intelligent - and yet she is still scared, unsure, and flawed. She is perfectly imperfect, and I like this about her. I feel like she and I would get along well - or at least, I can hope!

The love triangle... yes, you read that correctly. I HATE love triangles - I'll be the first one to tell you that I'm NOT reading a book or series if it has a really intense love triangle in it. This book does have a love triangle, but I really, really like how it comes about. You KNOW who the two males are, but it seems like the love triangle is a natural part of the story. It just fits really nicely in there.

And what I really liked about the romance? It really was NOT at the forefront of the story. Like, there weren't situations in the book - or the climax, for that matter - in which decisions were based on emotions or feelings for the other. I just like how the romance was not the driving plot of the story - the war/deception/assassination plot was the main plot. And did I mention magic and evil sorcerers and secret sorcerers and crazy murders? No? Well, you 'll just have to read the book...

Overall, I was quite pleased with how much I enjoyed this book. No need to be scared, I tell you. I'm so happy I had the chance to read Defy - thank you, Scholastic!

There were some little things that bothered me. For one, the language. In most fantasy novels - medieval fantasy, if you don't mind - the language is kind of "old", or medieval. I'm not saying that the characters should be speaking with "thee", "thou", etc., but in this novel, I feel like there are a lot of modern-day speak. Too many phrases jumped out at me as modern - and therefore, anachronistic.

Oh, and I'm not a fan of Rylan. It has nothing to do with the romance. I just think he's kind of child.

HIGHLY! Meaning - I highly recommend this novel! You like fantasy? Definitely read it. Not a fan of fantasy? Read it anyway. I have a feeling that all kind of readers will enjoy this book - readers who like any genre. And don't be discouraged by the mention of a love triangle! I hate love triangles, but this one seemed very natural. Just read the book, okay?

4 stars. This fantasy novel definitely does not disappoint! Don't miss it for anything!