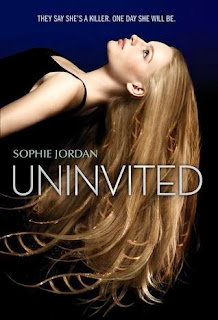 The Scarlet Letter meets Minority Report in bestselling author Sophie Jordan's chilling new novel about a teenage girl who is ostracized when her genetic test proves she's destined to become a murderer.

When Davy Hamilton's tests come back positive for Homicidal Tendency Syndrome (HTS)-aka the kill gene-she loses everything. Her boyfriend ditches her, her parents are scared of her, and she can forget about her bright future at Juilliard. Davy doesn't feel any different, but genes don't lie. One day she will kill someone.

Only Sean, a fellow HTS carrier, can relate to her new life. Davy wants to trust him; maybe he's not as dangerous as he seems. Or maybe Davy is just as deadly.

When I started this book, I had just about zero expectations. I wasn't super excited to read this book, like I know many bloggers were/are. I absolutely hated Jordan's Firelight series, so I told myself, if this book is anything like her other YA series, I'm giving up. Of course, I LOVED her New Adult contemporary romance novel, Foreplay (surprise! I actually liked an NA novel!), so that gave me some hope.

Well, it's safe to say that this novel was nothing like the Firelight novels (thank goodness!). I loved the plot of this story, the characters, the romance, the originality... Jordan definitely packed a good punch with this novel. And it doesn't hurt that this novel is one of only two books - part of a duology! There is nothing wrong with trilogies, only that there are soooo many of them out there in recent times. A standalone novel, the occasional duology, companion series - those are refreshing!

Davy Hamilton has the killing gene - the one piece of DNA that is sure to ruin anyone's life. She is immediately ostracized, as she is sent to a different school, abandoned by her friends and her boyfriend, and targeted by the other carriers. Davy is a bit of an easy target, because she is sweet, soft, not selfish. But life with the gene is no joke. And in no time, things escalate, and the government takes drastic measures to contain the carriers of the HTS "killing" gene.

One thing that I noticed (and loved) was that I read this book in one sitting. This doesn't happen too often for me - usually, life interrupts, or I get bored, or the book just isn't interesting enough. I flew through this book in no time. I remember reading, and BAM! I was already 40%, 65%, 89% finished. This tells me that the author did an excellent job of keeping me engaged in the story, and keeping me reading.

The story itself is definitely interesting. It follows Davy's life - there is a small part in the beginning that gives readers a glimpse of Davy's life before she found out. I like when authors do this - because then it allows readers to subconsciously compare the two lives, pre-gene and post-gene. Most of the book is spent dealing with Davy and her "adjustment". Jordan does not fail to toss around her characters. She makes Davy and Sean and Gil and many other characters suffer, which is sad, but shows that Jordan is capable of taking the story to different levels.

I actually really liked Davy, which surprised me. I was expecting a weak and stupid heroine like the one in the Firelight series (no offense?), but I did not find that in Davy. Davy is sweet and soft and not at all a killer, but I don't think she is weak or stupid. I can't fault her for any decisions she made, or her disposition. Her character development is excellent - Jordan really takes Davy on a journey. Davy definitely grows, from beginning to end.

Another character that I really liked was Sean. Sean is a carrier that Davy meets officially when Davy begins to attend the other school, after learning that she carries the HTS gene. Yes, Sean becomes a love interest. But he is so much more than that. He IS mysterious and handsome and brooding, and while he sounds like a YA hero cliche, he isn't. I can't put my finger on what exactly is different. Maybe it's the actual affliction - the killing gene - that sets him and this story apart from others. But he's different. And I like him.

Well, I've gone and told you a little bit about the romance. Davy and Sean! I hope and pray there will be no serious love triangle in this duology. That was one of the things I HATED in the Firelight trilogy. And the romance in this book is so subtle and simple yet complex. Jordan literally takes the entire novel to let the romance take its course. I LIKE this - that the romance isn't the only part of the book. It's so secondary, yet, Jordan never lets us forget that it is there.

The whole killing gene thing is so original! At least, I haven't read anything similar to this book. This novel is set in the future, but I wouldn't quite call it a dystopia. It has some qualities of a dystopia, but I really see it is part thriller, part science fiction. And I love the science part of this book!

All in all, a terrific read! I'm surprised by how much I enjoyed this book.

This is going to sound lousy of me, but I can't really think of anything to put in this section. YES, I'm giving this one four stars. It doesn't feel like a five-star novel to me, so I'm giving it four stars. But I don't really have a specific reason or reasons as to why I knocked off a star.

It's a four-star novel to me, okay? That's how I *feel* about this one, not what it adds up to. If that makes sense. I didn't LOVE this one, like, it's not my new favorite novel or anything, but I really, really enjoyed it.

Yes, I would! If you were planning on reading this book, then make sure you do so! It's worth the read, and who knows? You might really fall in love with Davy (and Sean's) story! If you weren't interested in this one, or are seeing it for the first time, give it a try! This novel is part thriller, part science fiction, and a tiny bit dystopia. And there is a subtle romance. So, there is something for just about everyone!

4 stars. I will definitely be interested in reading the second book in this duology! I can't wait to see the direction that Jordan takes with that conclusion novel.