Review: Into the Still Blue by Veronica Rossi 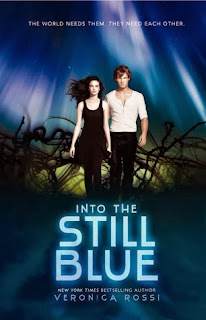 The earth-shattering conclusion to Veronica Rossi's "masterpiece" Under the Never Sky trilogy and sequel to the New York Times bestselling Through the Ever Night (Examiner.com).

Their love and their leadership have been tested. Now it's time for Perry and Aria to unite the Dwellers and the Outsiders in one last desperate attempt to bring balance to their world.

The race to the Still Blue has reached a stalemate. Aria and Perry are determined to find this last safe-haven from the Aether storms before Sable and Hess do-and they are just as determined to stay together.

Meanwhile, time is running out to rescue Cinder, who was abducted by Hess and Sable for his unique abilities. And when Roar returns to camp, he is so furious with Perry that he won't even look at him, and Perry begins to feel like they have already lost.

Out of options, Perry and Aria assemble a team to mount an impossible rescue mission-because Cinder isn't just the key to unlocking the Still Blue and their only hope for survival, he's also their friend. And in a dying world, the bonds between people are what matter most.

In this final book in her stunning Under the Never Sky trilogy, Veronica Rossi raises the stakes to their absolute limit and brings her epic love story to an unforgettable close.

First: this review will NOT contain any spoilers, at least for this book. I can't guarantee that I won't spoil things for books one or two. But book three (this book) is safely unspoiled in this review.

That being said, this review will probably seem to be extremely vague. I would hate to ruin any part of this conclusion novel for anyone, even by mentioning just the slightest specific thing. It would seriously break my heart. I wouldn't appreciate it if someone trusted with an ARC of a conclusion novel spoiled something for me in their review.

This book picks up around the time that the second one ends - maybe a few weeks after it ends. The Tides is still having problems - food shortages, restlessness, difficulty shelter from the aether storms. Cinder is gone. Everything points to the Still Blue. Everything about this novel is about the Still Blue.

So, that's as far as I go with the plot. Rossi does an excellent job of keeping the plot moving, keeping it interesting, and keeping things unpredictable. Twist after turn, Rossi does not give Aria, Perry, Roar, and crew, a break. I love this aspect of the novel - I couldn't stop reading, once I started!

I LOVE that there is no love triangle in this entire series. To me, there never was a hint of one, or the possibility of one. It was always Aria and Perry. Rossi never fails to deliver on the chemistry in this book, but also on the romance. She allows readers to see how much Aria and Perry want each other, but also, how much they need each other and depend on each other.

Rossi allows does a really good job of torturing and testing her characters. EVERYONE suffers in this book, one way or another. I promise I'm not spoiling anything - because the suffering is physical, mental, psychological, and emotional. No one is left not scarred, and I really like this. It shows how well Rossi can develop a story, bruise her characters, and make things REAL.

Overall, I really could not have asked for a better ending to an awesome trilogy. I LOVED book one the most, mostly liked book two, and enjoyed book three. Series should end like this one - not heart-wrenching and painful and angst-filled. Of course, now I'm filled with all the sadness because I really enjoyed this series!

It's funny though - I don't actually finish a lot of series. I start them, usually because the first novel in a YA trilogy is an author's debut (usually). So, I'll read the debut, and then kind of not read the second or third book. Oops? Well, I finished this series! SCORE!

I'd say the only thing that I really didn't like was that the first, hmm, one-third of the book? Was a bit slow. I saw one person on Goodreads marked this book as "DNF", because she didn't finish. She probably stopped within the first one-third of the book. It was a tiny bit slow, and I kind of skim-read parts.

But honestly, it wasn't that bad. I personally was in no danger of NOT finishing this book.

One other thing that bothered me really doesn't have much to do with the content of the book - the summary. It seems to make the book (and series) focus on Perry and Aria's love/relationship, rather than what is basically the world ending under aether storms. Seriously?! The romance is important, but it wasn't the most important part of the series, like in the  Shatter Me series or The Selection series or something.

4 stars. A beautiful end to a lovely trilogy! THIS is how a trilogy should end. *cough cough*