Review: When the Rogue Returns by Sabrina Jeffries 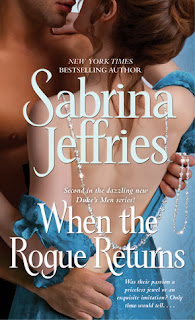 The second sparkling book in the New York Times bestselling Duke’s Men historical romance series, featuring the Duke’s cousin and a skilled female jeweler who must unravel a mystery ten years in the making.

It had been a decade since Victor Cale, first cousin to the Duke of Lyons, had seen his wife. After some royal jewelry went missing from the jeweler’s shop where they worked, Isabel Mertens disappeared. When Victor gets word of a woman who fits his wife’s description, he sets out to confront her. But he discovers that nothing is as it seems—and revenge is never as sweet as true love.

I read and enjoyed the first book in this series (What the Duke Desires) earlier this year, so naturally, I was excited to read the second in the series. I have to admit, I wasn't as pleased with this book as I'd hoped to be, for various reasons. However, for the most part, I found this a tolerable and okay read.

Victor Cale and Isabel Mertens married ten years ago - but they have been separated for ten years. Just months after they got married, they parted ways, but both of them had different understandings of why the other had left. Both of them thought that the other stole a diamond necklace - a necklace that was supposedly replaced by Isabel's recreation. Isabel is a jewelry designer - she designs pieces of jewelry that are mostly fake, but look very real.

Well, fast forward ten years. Victor finds Isabel, and tracks her down. The rest of the book follows Victor and Isabel's feelings of anger and betrayal, and their slow journey to piece together what really happened ten years ago.

I really liked Victor. I felt bad for him the entire time - he lost SO MUCH more than Isabel did. I didn't like Isabel. She's stupid (see below). Victor deserved better.

I can safely say that the author created an interesting premise to this novel - I haven't read any historical romance novels even close to what Jeffries has woven here. I'm not saying I loved it - the execution wasn't the best, but I applaud her originality. For a while, I really wanted to know what was going on. After a while, it's a tad bit predictable.

In general, my biggest problem with this book was that it was BORING, overall. There weren't just pockets of boring scenes - the book, in general, was boring. I'm pretty experienced with reading boring books, and I like to say that I have the patience to read them, which is why I finished this book, and it has a review. But it was still boring. The plot seemed to drag on and on, laced with petty squabbles and angry banter and fizzling chemistry. I use the word "fizzling", because the chemistry in this book was seriously lacking, in my opinion.

Yes, that brings me to problem number two: I really was not feeling the chemistry OR the romance. I honestly could care less if Victor and Isabel got back together, in the end. Wait, no - I cared because I really liked Victor, and Victor deserves to happy. For some reason, that involves Isabel.

I really just did NOT like Isabel. Yes, I understand that both of them were under false impressions, about what happened ten years ago, but I dislike Isabel and what she did, what she took away from Victor. I blame her for many things, especially for being so stupid, with her relatives. Poor Victor.

So, I basically spent the entire book hating Isabel. There's a problem there, when you hate the heroine of the novel. And when you dislike the plot, because the story is predictable. And the ending just worked out too well - everything fell right into place, down to the lovesick duke finding someone else to fawn over. Just a little TOO perfect - which I'm not a fan of.

Ehhh, not really. If you read and enjoyed the first book in the series, then I think you should read this book. But otherwise, this one wasn't really remarkable or noteworthy or anything. I don't think it would be worth starting a new series, because this book wasn't nearly as good as the first book (for me, unfortunately).

2.5 stars -> rounded down to 2 stars. I wasn't really impressed, but I suppose it was worth the read. The third book doesn't have a synopsis yet, but I might read that one still. Might.