Review: If Wishes Were Earls by Elizabeth Boyle 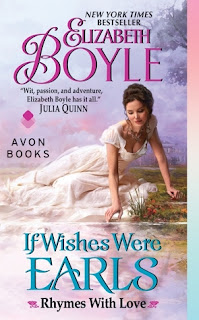 Harrriet Hathaway has loved only one man her entire life: the Earl of Roxley. But when he ignores her at a ball, she takes rather desperate steps to catch his eye and her plans find her ruined and without any hope of gaining Roxley’s heart. So it is much to her amazement when Roxley proposes marriage to save her from ruin. But Roxley’s proposal isn’t quite on the up and up and when she finds out she’s just another piece in one of his plots and japes, she vows revenge.

Roxley is desperate to pull his family from the brink of ruin, and the only way to gain a lost fortune is to prove to his aunts that’s he’s “reformed” his life and is determined to settle down. But the bride-to-be that he thought would be most amiable is doing everything to turn his life and his heart upside down. Harriet Hathaway had always seemed the most sensible girl he knew, but now this siren of a stranger he’s engaged to is leaving him feeling anything but sensible. Harriet is about to steal not only his heart, but quite possibly the keys to the Roxley fortune.

What a fabulous historical romance novel! I wasn't sure what to expect with this novel - in all honesty, I hadn't read the summary in a very long time. I requested this book months ago, and downloaded it months ago. I've now read this book in December, so I had no idea what this book was about. So, my expectations were fairly low, if existent at all, for this book.

I was pleasantly surprised by how much I liked this book! Harriet and Roxley, the non-romance plot, the humor... everything was wonderful! There was a slow start, but the plot warmed up and took off. I didn't expect so much from a historical romance novel. Some might be put off by the amount of this book that ISN'T romance, but I love that.

Let me talk about the romance. Harriet and Roxley have a history. They shared a very passionate kiss, and then some time after that, a memorable night together in a garden. Months later, neither can forget either event, or each other. But Roxley is in dire straits, and is blackmailed into marrying a merchant's daughter, in order to save his family's fortune and his good name as the Earl of Roxley.

Harriet, of course, will have none of that. When she finally thinks that she will be reunited with Roxley, after so many months, she is crushed at first, to learn the hard way that Roxley will be marrying another. Harriet is not so easily deterred. She puts her nose and herself right into the thick of things. I love this about Harriet - she is bold, but not in the typical way that you might find in historical romance novels. She also isn't a simpering ninny. Good for her.

She and Roxley are so perfect for each other, and they know it, and it takes more than half the book for the two of them to finally realize that they can be together. Both of them find out that the merchant and his merchant aren't as honest as they appear, and that is when things go downhill. Harriet isn't safe, Roxley's aunts aren't safe, and the mysterious diamonds aren't safe, either.

The romance is great, in this book. It doesn't exactly take the forefront in this novel, though it might appear to do so. There is so much going on - Roxley trying to figure out who the merchant's daughter really is, Roxley trying to find the family's lost diamonds, Harriet trying to seduce Roxley back into loving her (he never stopped loving her, in case you wanted to know), Harriet dodging the idiot Fieldgate, Roxley and Harriet and the merchant's daughter prancing across the country to meet Roxley's aunt... it's a very busy book!

And might I mention the humor in this book? Oh my goodness, I loved how Boyle injects the occasional joke or hilarious scene every now and then. I cannot remember the name, but there is this one Lord somebody who ALWAYS says the funniest things at the perfect times. And then there is Harriet, with her five brothers, and her ridiculous childhood with Roxley. There were so many funny scenes in this book - which I really appreciated.

Overall, I really liked this book! I might actually read it again - we'll see. It has to be a fairly great book for me to re-read it, and this one was great! Plus, the romance was steamy, when there were steamy scenes. An all-around great novel!

Occasionally, there was some dragging in the plot - meaning, it seemed like the story was stuck in one place for too long. Like, I'll admit, the beginning is kind of slow. The way the plot is set up - with flashbacks placed every now and then in the story - made the story stand still for some time. The author needed readers to understand the past between Harriet and Roxley, and there was a lot that had already happened before this novel started.

Of course, I never read the first two novels in this series (not that one HAS TO), so perhaps the background might have made more sense had I read them. I don't know if the events that transpired between Harriet and Roxley occurred during those books.

But that's okay, about the drag, because it's a small thing, and it didn't detract from the overall story. It was just a pacing issue, but a tiny one nonetheless.

YES! I was very impressed with this novel, and how much I really liked it. This book isn't just a romance novel - there is a fair amount of great humor, scheming, and action. A perfect mix!

4 stars. I really enjoyed this one! This one will probably end up on my end-of-the-year favorites list.