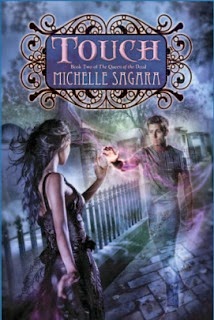 Nathan died the summer before his final year in high school. But he wakes in his room—or in the shrine of his room his mother’s made—confused, cold, and unable to interact with anyone or anything he sees. The only clear memory he has is a dream of a shining city and its glorious queen, but the dream fades, until he once again meets his girlfriend Emma by the side of his own grave.

Nathan wants life. He wants Emma. But, even if Emma can deliver what he desires, the cost may be too high to pay...

I'm really trying to think of redeeming qualities of this book, I really am. But I seriously don't know what stood out, that I can remember, that I really liked. Honestly, I can't even summarize this book properly - I have no idea what was going on.

One: Sagara did not do a really good job of refreshing readers with events that happened in book one. You know when you first start reading a sequel, and the author slips in a really abridged recap of the first book in the beginning of the sequel? For people who are really familiar with book one, it might be annoying, but for people who don't really remember book one, it's extremely helpful. Also, the author will mention events that occurred in book one periodically throughout the sequel, and remind readers of who certain characters are.

I'm going to be honest with you: I didn't remember most of book one. I didn't even remember who Nathan was - without reading the summary of this book. I remembered Emma, Eric, and a fire. That's it. And what did not help was that Sagara didn't summarize what happened in book one for us (in the beginning of book, as most authors subtly do), and she didn't really hint at what happened throughout the book.

I usually remember books really well - even if I didn't absolutely love them. But let's be honest: I hadn't read book one (Silence) in over a year, and while I LOVED that book, I didn't re-read it like, ten times, or anything. I borrowed it from the library, read it, and returned it. That was in June 2012. So... I didn't really remember much. Just that I LOVED book one.

Two: this book is boring. Like, I legitimately had to stop around 30% of the book, and take a twenty-minute power nap. I am not joking. I could not keep my eyes open while reading the ENTIRE BOOK. That is a problem. And no, I was not reading it at early hours of the morning. I DID get a good night's sleep for the previous days. This book was just THAT BORING.

Three: the plot made very little sense to me. Or rather, there really wasn't a plot? Events seemed scattered and unrelated. Beware the Necromancers, wonder about Nathan's appearance, help a dead boy, beware the Queen... that almost sounds straightforward. But the plot is anything but that. It's so disjointed and all over the place - I couldn't figure out where the author was going with anything.

Four: this book is in third person, but it's in third person limited, with multiple points of view. That is SO ANNOYING, in this book. I could never tell where the switches where exactly, so I would get annoyed when I realized that I was reading the events in someone else's view. I mean, it's all third person, but Nathan Allison, Chase, and Emma think very differently. And the switches were very random. They weren't clearly marked by a symbol, or a large space, or anything. I suppose this might be fixed in the printed copies of this book, but it was so irritating to deal with, while reading.

Five: ALL of the characters, with the exception of Eric (and maybe Michael), are kind of sickeningly stupid. I remember really liking Emma, in book one. In this book, I really don't like her. She's sort of dense, or maybe just naive, or brainless, or something. I didn't like Allison either, because she decided that she needed to be in EVERYTHING, right in the middle. I didn't like Chase, because he seems too angry all the time. Chill, bro. I didn't like Amy, because I feel like she was forced upon readers, and the author tried too hard to make her a dynamic and spunky character. Just... no.

Six: the romance is so weird. One couple sort of deserves each other. But Emma and her dead boyfriend. Weird. Like, leave the dead alone. If they're supposed to be dead, let it be. Move on. This is when I dislike romance in books - when the romance suddenly make ALL the difference in the plot. Like, Emma's feelings for Nathan is what drives this book, and the next book. No. Bad. Bad, meaning, not something that I like.

Seven: the ending was CONFUSING. I mean, the entire book was confusing, and very boring, but the ending in particular was confusing. I honestly have no idea what happened, and I just spent the last three hours reading the book. The ending was kind of like a slap in the face, because the entire book is sort of la dee dah, until the climax, and that's where the author decides to throw all of the action into one scene. But I'm confused. I don't understand why, all of a sudden, everyone realizes that there is danger. Like, it's hard to explain, but basically, WHAT? Break it down, please.

Overall, I couldn't figure out what was going on, and I didn't like the characters, and this book was not for me. Cue the disappointment, because I was really excited to read this book. I gave the first book FIVE stars last year! How often does that happen?! Ugh. This was a not-so-great sequel.

No, not really. It's unfortunate, because I was looking forward to reading this book (and potentially enjoying it). I hate it when sequels disappoint me! Honestly, if you liked the first book, it's worth a shot. But if you have not read the first book, then don't bother with either book. It's not worth it (in my opinion).

1 star. I'm super disappointed with this book, and this series, for that matter. I doubt I'll be reading subsequent novels in this series. That's too bad!