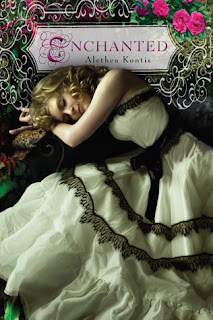 It isn't easy being the rather overlooked and unhappy youngest sibling to sisters named for the other six days of the week. Sunday’s only comfort is writing stories, although what she writes has a terrible tendency to come true.

When Sunday meets an enchanted frog who asks about her stories, the two become friends. Soon that friendship deepens into something magical. One night Sunday kisses her frog goodbye and leaves, not realizing that her love has transformed him back into Rumbold, the crown prince of Arilland—and a man Sunday’s family despises.

The prince returns to his castle, intent on making Sunday fall in love with him as the man he is, not the frog he was. But Sunday is not so easy to woo. How can she feel such a strange, strong attraction for this prince she barely knows? And what twisted secrets lie hidden in his past - and hers?

Sunday is the seventh daughter in the family, and the eighth child (I believe she is the eighth!). Each of the girls have a power, and Sunday's is a powree over words. So, Sunday writes down her stories - but only history, or things that have already come to past. She writes about her family, most of the time.

When she meets "Grumble" the talking, enchanted frog, she begins to read him her stories. Whenever she meets him, she reads to him, or they talk. Grumble learns much about Sunday and her family. Sunday kisses Grumble a few times, but none of them turn him back into a human.

Eventually, Grumble does turn back into a man - Prince Rumbold. And Rumbold is in love with Sunday, but he doesn't remember much about his life. He heads back to the castle, and hosts three balls, where every maiden in the land is invited.

The balls were magical! Each one of them was different, but in each, Rumbold and Sunday meet. Sunday does not realize that Rumbold is Grumble for quite some time, so she simply enjoys the affections of the prince. Of course, Rumbold recognized her immediately. Sunday fell in love with the prince, for the prince. It's nice how that worked out, that she fell in love with the man as well. It didn't feel forced, or instant. Kontis crafted the romance beautifully.

It's just like in the fairy tales. Frogs need to be kissed, but by a maiden who loves them. There are magic beans, fairy godmothers, magic, wicked kings, potions... I love how Kontis built Sunday's world, and how she wove so many fairy tales into one story!

Of course, there is a darker side to the story. The king is evil - and in ways you wouldn't imagine. He catches sight of Wednesday on the first night of the three balls, and wants to marry her. Of course, you might think that's weird, but wait until you hear why! The king is weird.

The romance between Rumbold and Sunday is beautiful! I loved the two of them together. And the ending of this story is perfect. Cookie-cutter perfect, but I liked it!

The magic and curses and evil part of this book was confusing. I didn't understand why Rumbold didn't have his memories, and what was happening to him after he turned back into a human. I didn't understand the deal with the king and Rumbold's fairy godmother. I mean, I sort of do, especially when Wednesday came along and the king noticed her, but I thought that the magic wasn't very well explained. I breezed through some of the parts of the book with the magic because it wasn't explained, and I was confused!

I would definitely recommend this book! I thoroughly enjoyed it, for the romance, the fairy tales, the plot, and the story. I love how Kontis takes the romance and makes the story into so much more. Especially at the climax of the book! Kontis is brilliant!

4 stars. I'm so very happy that I got the chance to read this book!