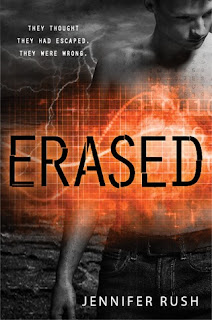 They thought they had escaped. They were wrong.

After fleeing the Branch with Sam, Cas, and Nick, Anna is trying to make sense of the memories resurfacing from her old life. At the same time, she's learning how to survive in hiding, following Sam's rules: Don't draw attention to yourself. Always carry a weapon. Know your surroundings. Watch your back.

Then a figure from Anna's childhood reappears. Is it a Branch setup, or could it be the reunion Anna has hoped for? Uncertain of where her loyalties lie, Anna must fight to learn the truth -- before she is betrayed again. Ultimately, the answers hinge on one question: What was the real reason her memories were erased?

Jennifer Rush delivers a thrilling sequel to Altered in a novel packed with mysteries, lies, and surprises that are sure to keep readers guessing until the last page is turned.

Oh, how I waited for you, Erased. It's been a very long time since I read Altered. I think it was the first book I read this year - it's fitting that Erased will be one of my last books read for 2013 (#167 of about 180 books projected). What an amazing series! One of the best things about these books is that while I really remember Altered (I re-read that book so many times), I jumped right into Erased, without having to re-read Altered.

I'll freely admit that I loved the first book more than this book. Altered was SO AMAZING. It's definitely going on my top ten of 2013 at the end of the year. This book (Erased), to me, wasn't as awesome as its predecessor - but I'm not saying it was awful or anything. This book is fabulous! An awesome sequel to one of my favorite series. And a thriller, at that! I don't read too many thrillers, unfortunately.

A few months have passed, between book one and book two (I believe it is two months... I hope I'm not completely off). Anna is now struggling with flashbacks, just like Nick and Sam had been. She remembers bits and pieces of her old life, with her sister, and sometimes the boys. But her flashbacks are often painful... indicating that something terrible happened in her past, something that the Altered program really did not want her to remember.

Overall, I really enjoyed this book! It's definitely a great sequel - probably one of my favorites. I would make this one a priority, if you liked Altered. I LOVED Altered, and I'm glad I got the chance to read Erased. But hey - it is totally worth the wait!

I can't really pinpoint what exactly I did not like about this book. I think it's because this book is on the short side, and while a good amount of action happens, it feels like there wasn't much to it. Don't get me wrong, I enjoyed the story and the plot. But I feel like less happens in this book than in book one.

DEFINITELY! I loved Altered, and I think Rush does book one justice with Erased. Book one was better in my opinion, but book two is so great. If you read and liked/loved book one, and then you will definitely enjoy book two. And then you'll be joining me in begging for book three. Yes - begging!

4.5 stars -> rounded down to 4 stars. A really great sequel to this series! I cannot wait to read the third book.