Review: To Sin With A Viking by Michelle Willingham 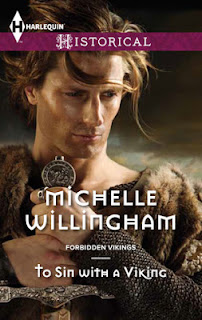 To Sin With a Viking by Michelle Willingham
Book One of the Forbidden Vikings series
Publisher: Harlequin
Publication Date: July 23, 2013
Rating: 4 stars
Source: eARC from NetGalley

Caragh Ó Brannon defended herself bravely when the enemy landed—only, now she finds herself alone with one very angry Viking…

Styr Hardrata sailed to Ireland intending to trade, never expecting to find himself held captive in chains by a beautiful Irish maiden.

The fiercely handsome warrior both terrifies and allures Caragh, but he is forbidden territory. He is the enemy…and he is married. Yet Styr harbors a secret that just might set them both free…

Resist them if you can!

I knew as soon as I read the synopsis of this book that it would be something that I would potentially enjoy. I don't read a lot of Viking-history books. Actually, I don't think I've read any! But, it's historical fiction, and I love historical fiction (especially historical romance), so I knew I had to give this one a try.

Ms. Willingham certainly knows her Viking history! I admit, I have not read a ton of Viking-history books, BUT, I do have a bit of knowledge of the Vikings from studies in school. I think Ms. Willingham did her research well, as I found the historical aspects of this book very authentic. I watch for anachronisms in every historical fiction book I read, and I didn't find any glaringly obvious ones in this book.

The story of this book is pretty simple. Styr and his crew land on Caragh's island. Caragh captures Styr, because she doesn't want him to hurt her people. Styr's people sail away, held captive by Caragh's brother. Caragh and Styr eventually come to an agreement to look for Caragh brother and that ship with Styr's people - and Styr's wife.

There were so many things that were wrong about Caragh and Styr's relationship. For one, Caragh captured Styr. Styr and his people had no intentions of attacking Caragh's people, but that's what Caragh's people thought. Caragh's people needed food, so they thought that the Vikings would have food. So, Caragh captures Styr. Styr's wife and his people are captured and taken away by Caragh's brothers. Styr is married. Caragh's brothers dislike Styr. So many things wrong with Caragh and Styr's relationship!

Yet, Caragh and Styr's relationship (and the growth of it) was beautiful. I believe in the beginning of the eARC that I got, Ms. Willingham talked about how she wanted to explore the possibility of falling in love, when one's marriage is no longer filled with love. Styr never once touched Caragh, but his feelings betrayed him eventually, even if he never did anything unfaithful.

So, I love what Ms. Willingham decided to do with this story! Caragh understands that Styr is married, but she can't help but fall in love with the person that escaped from her capture and still helped her find food, and agreed to help her find her brother and his people. Styr knew that he should be happily married, and not once did he stop thinking about his wife, but he cannot help but fall in love with Caragh as well.

There is a particular part of this book that I love - when Caragh and Styr find out where Styr's brethren are (in slavery by a very rich man). This part in the book is quite funny, because the rich man is totally lusting after Caragh, and she is definitely pitting him and Styr against each other without meaning it. Her choice with the man nearly broke my heart, but that choice is negated by Styr swooping in to take Caragh away.

So, I really liked the story. I really liked the romance. The characterization is pretty good - we definitely see growth in Caragh, even until the end. She lets go of Styr, even though she thinks she can't. She doesn't want to accept him, because she knows that his marriage to Elena is what matters to him.

Rest assured - there is a happy ending. It doesn't come obviously or immediately, but it's a happy ending for everyone. I can't wait to read Elena's story!

I think this is a small thing, but I felt like the story could have picked up sometimes just a tiny bit. Like, at times, the story dragged on a bit, but then, at other times, I couldn't read fast enough. So, there were slight pacing issues? This was definitely not a huge thing that made me cringe or anything, but it's something that I noticed.

I totally would recommend this novel! My first Viking historical romance read was a success! If you love historical fiction (and not just Regency or Edwardian historical), then give this book a try!

4 stars. As I said before, I cannot wait to read Elena's story!