Review: The Sea of Tranquility by Katja Millay 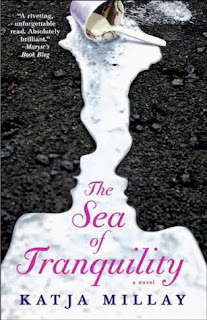 I live in a world without magic or miracles. A place where there are no clairvoyants or shapeshifters, no angels or superhuman boys to save you. A place where people die and music disintegrates and things suck. I am pressed so hard against the earth by the weight of reality that some days I wonder how I am still able to lift my feet to walk.

Full of rage and without a purpose, former pianist Nastya Kashnikov wants two things: to get through high school without anyone discovering her past and to make the boy who took everything from her pay.

All 17 year-old Josh Bennett wants is to build furniture and be left alone, and everyone allows it because it’s easier to pretend he doesn’t exist. When your name is synonymous with death, everyone tends to give you your space.

Everyone except Nastya, a hot mess of a girl who starts showing up and won’t go away until she’s insinuated herself into every aspect of his life. The more he gets to know her, the more of a mystery she becomes. As their relationship intensifies and the unanswered questions begin to pile up, he starts to wonder if he may ever learn the secrets she’s been hiding or if he even wants to.

The Sea of Tranquility is a slow-building, character-driven romance about a lonely boy, an emotionally fragile girl, and the miracle of second chances.

When all the hype over another indie-to-traditional publishing novel somewhat died down, I decided to pick this one up and read it. It's wayyyy past the time I needed to read it to submit a review to NetGalley, and wayyyy past the hype of the book, but I am glad that I waited so long to read this book. A lot of times, hype has the opposite effect on me - making me NOT want to read the book (like Defiance, for example). The only difference is, I loved Defiance. I didn't love this book.

The synopsis of this story and all those glowing reviews led me to believe that this book is a must-read, do-not-miss novel, especially since it did well enough that Atria noticed, and bought the rights. For some reason, I was expecting some dynamic, life-changing romance, and an intense plot dealing with Nastya's past.

This book is split into Josh's perspective and Nastya's perspective. So, every other chapter or so, we see the perspective switch. I really liked this aspect of the book. Of course, it solidifies the idea that Josh and Nastya are the love interests and couple of the story, which is a downer because I like to discover the relationship as it goes. Knowing right from the start that they are the ones that will fall in love and whatnot is a tad bit disappointing.

This might come off as a rant of disrespectful - and I'm hoping you readers don't think that. I mean no disrespect towards the author or the publisher or any other readers of this book.

I really did not enjoy this book as much as I hoped. I'm giving it two stars (as opposed to one star) because the story is heart-breaking yet powerful, and I like the overall message of the story. I like the outline or skeleton of the book, but with the "meat" of the story, I had problems.

This book is long. Length never bothers me with books - I love long books. BUT. This book was long, and definitely boring. I got so tired of just reading this book, which almost never happens! Most of this book is Nastya's musings about things before the accident, or Josh brooding over Nastya. But seriously, about 40% of this book - the first 40% of the book - was boring and totally unnecessary.

Ms. Millay uses the first 40% of the book to introduce us to Josh and Nastya and the situation of Nastya. But I feel like 40% of an already long book is overkill. Not even half of the text in the first half of the book is necessary for readers to get a feel for Nastya's world. I was so bored out of my mind, I almost DNF'd this book. I couldn't see the appeal, but I kept reading, hoping to find it.

Honestly, I never did. I still don't see why everyone went OMG over this book. Besides the fact that overall, the book was boring, and the first half of the book is really slow and REALLY boring, there is the fact that I absolutely hated Nastya.

Okay, don't get me wrong. I understand the psychology of trauma and unforeseen traumatic events and whatnot. But there were so many things that Nastya did that made me think, is she really suffering, or is she using her tragic situation as an excuse? To me, it felt like a bunch of excuses (i.e., bulls***). So, Nastya dresses like a complete whore because she wants people to think she's a whore? Her reasoning is that she knows people will talk about her, so why not give them an excuse?

WHAT?! Really?! Is that what you think?! Talk about flawed logic. You're going to wear skin-tight, low-cut shirts and tiny, itty bitty skirts, and HIGH-HEELS to school and disgusting "black s***", because you want people to talk about you as you are a whore, and not for some other reason? REALLY?! I'm a teen (not a messed-up teen, but a teen), and there is NO WAY I would ruin my public image like that. That's disgusting.

And how about what happened with Josh, when you-know-what finally happened? She leaves because she just wanted him to ruin her completely?! What does that even mean?! He didn't ruin you if it was consensual, and you're f***ing stupid if you use someone you DO care about just for sex, so you can FEEL like a whore. Or whatever her ridiculous logic was. I'm already convinced that Nastya left her brain somewhere.

Again, I understand the psychological damage that comes from traumatic situations. But I don't think Nastya acted out of her pain and suffering. She's full of s*** and makes excuses because she doesn't want to face the inevitable truth that terrible things in life happen, even to the best of us.

I'm sorry, but I just don't like Nastya. She and I would not get along if she were a real person, because I would be calling her out on her s*** every five seconds. All of my friends know that I am honest and forthright and I don't spare feelings when it comes to bulls***. Nastya needs a darn good therapist that will kick her in the pants every time she feels sorry for herself.

So, this entire boring book was spent on babying Nastya and trying to help her heal from the incident that we finally understand by the end of the book. I love the message of the story, and the author's use of a traumatic situation in this novel, but seriously?! This whole, LONG, boring book is spent trying to make Nastya feel better.

I thought I knew what to expect with this one, but I did NOT get what I expected. I expected some earth-shattering romance... nope. The romance was kind of bland. I can tell that Josh really like Nastya (for whatever reason), but I'm not convinced on her end. So, I hated the romance in this book as well.

So... yeah. I'm not going to say anymore because now I'm all fired up and I've decided that this book was not for me.

No, I would not. Though I think several thousand people would.

2 stars (I changed it from 3 stars to 2 stars, because I am all about rounding 2.5 stars down when I dislike the book)