Review: No Attachments by Tiffany King 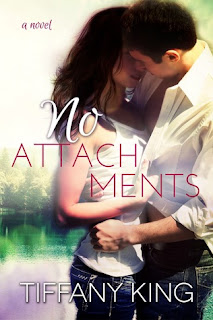 ***Recommended for ages 17+ due to sexual situations, language and mature subject matter***

Ashton Garrison walked away from a privileged life in order to hide from the one thing she's not willing to face. She knows she left behind a trail of pain, but in the long run, her betrayal will hurt less than the truth. She now has one goal: Live life to the fullest with no regrets and no attachments. She has high hopes that a move to new surroundings will provide the escape she desires, but what Ashton doesn't count on is how fate always seems to find a way to screw up any good plan. Sometimes, when love comes knocking, the pull is too strong not to answer. Suddenly, what she thought she wanted to escape from is what Ashton now wants more than anything.

Nathan Lockton has one mission: find his target and complete the task he was hired to do—no attachments and no emotion necessary. He's done it over and over again. What he thought was a typical lost-and-found job has turned into a life examining moment as Nathan is forced to deal with something he has always ignored--his feelings. Now faced with a decision, Nathan must choose to either follow his heart or complete the job.

Love can come when you least expect it. The question is: If the odds are stacked against you, how far are you willing to go for the one you love?

I can't say I liked anything about this book. Most of my blogging friends and Goodreads friends LOVED this book. Heck, I thought I'd be one of them, because I love Tiffany King.

You ever hate when something pops up in the reading world, a new trend/fad/thing, and ALL the readers love said trend. And then ALL the writers must follow that trend. Suddenly, many popular writers MUST write a book that is comparable to that trend.

Well, here's what happened. "New Adult" contemporary romance appeared, let's say, about a year ago, picked up speed, and exploded into the Young Adult/Adult reading world. Original authors such as Colleen Hoover, Tammara Webber, and Jamie McGuire were noted as pioneers of this new age level (and they totally are!). But suddenly, a ton of other authors wanted to be just like them and feed off the success of this trend, and a ton of authors wrote New Adult contemporary romance books as well.

This book is absolutely no exception to the monotony of New Adult contemporary romance. It's the same story I've been seeing, with a slight variation. In this book, Ashton is running from something - but not a former love. Nathan is paid to track her down - but not by a former love. Yay for a wee bit of difference.

The same story ensues though. The quiet, awkward girl totally falls for the new, HOT, ripped guy in town, and he falls for her (even though he really should be turning in her whereabouts to his client). They have TOTALLY HOT CHEMISTRY (barf) and have naughty conversations and banter (um, no).

I never FELT the connection between Ashton and Nathan. I feel like the author TOLD us about their chemistry and feelings and whatnot, but she didn't really SHOW us. Sure, they had sex, and had some "hot" make-out session (which, by the way, were NOT hot - neither the make-out sessions nor the sex), but I never felt them falling in love. In fact, I kind of don't understand the lust part either.

I feel like the author just threw together, dropped in a couple of scenarios where they would bump into each other, and BAM! They're having sex. I didn't like this progression. It seemed silly, and forced. And if there is anything I hate about my romance novels, it's a forced relationship. Nathan and Ashton didn't necessarily have insta-love, but I didn't not believe their relationship for a second.

And Ashton!? Gosh, I hate her so much. She's not "interesting", in my opinion. Nathan's all like, "you're interesting and bubbly and vibrant" or whatever, and I'm sitting here like, is this the same person we're referring to?! Because all I saw was a boring boring boring BORING girl. I did not see her as interesting at all. She is right in her estimation of herself - boring.

And she's such a coward. If there is anything I hate, it's cowards. Her reasons, no, EXCUSES, for running away to Woodfalls are cowardly, and shameful. ESPECIALLY that letter that she wrote to her father? Bulls***. Utter bulls***. I hate heroines that base ALL their decisions on excuses. Everything Ashton does is based on a lie and an excuse.

And the fact that this book has like, zero plot, other than the "romance" and Ashton's excuses, is a total turn-off. The climax is Ashton facing the people she left behind. Then Nathan waits like, half a year for year for her. I'm going to be completely honest: you wait for a girl for MONTHS (six months, I believe), a girl that you knew for a week? She ignored you and didn't want to see you for months, yet, you wait for her, expecting her to change her mind? I know Ashton wrote that letter to him, to wait for her, but that's bulls*** too.

Ashton's reasons for not wanting to see Nathan at the very end are BULLS***. "I don't want to see me because I'm ugly, I'm not the same person, blah, blah, blah". Whatever, girl. If he really loves you, he wouldn't care! Which is exactly what happens. But I don't get how he loves her, after a week of LUST, and six months of never seeing her. UNBELIEVABLE.

Honestly, I was really hoping that Ashton would die in the end. I really did. Or, that Nathan and Ashton would part ways. I mean, they knew each other for a week. Six months is a long time to wait. I bet you a hot guy like him would have fallen in love with someone else, FOR REAL, in six months.

Yeah, I hate this book. I wish Ashton died. The ONLY reason why I finished this one was because I was really, really hoping to see Ashton die. That sounds horrible, especially with her condition, but nope. No dice.

No. Don't do it. I love this author, and I mean no disrespect to her in this review, but this book was an utter waste of my time.

1 star. In all honesty, 0 stars works for this one. I don't think I've disliked a book this much in quite some time.