Welcome to the Relic tour! I'm so excited to be a part of this tour, and to share my review with you today! Renee Collins is one of the Friday the Thirteeners, and one of my various goals of 2013 (and 2014, since two authors got their books pushed back to April 2014) is to read all the Thirteeners books. 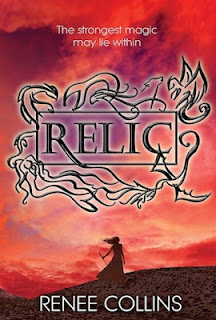 After a raging fire consumes her town and kills her parents, Maggie Davis is on her own to protect her younger sister and survive best she can in the Colorado town of Burning Mesa. In Maggie’s world, the bones of long-extinct magical creatures such as dragons and sirens are mined and traded for their residual magical elements, and harnessing these relics’ powers allows the user to wield fire, turn invisible, or heal even the worst of injuries.

Working in a local saloon, Maggie befriends the spirited showgirl Adelaide and falls for the roguish cowboy Landon. But when she proves to have a particular skill at harnessing the relics’ powers, Maggie is whisked away to the glamorous hacienda of Álvar Castilla, the wealthy young relic baron who runs Burning Mesa. Though his intentions aren’t always clear, Álvar trains Maggie in the world of relic magic. But when the mysterious fires reappear in their neighboring towns, Maggie must discover who is channeling relic magic for evil before it’s too late.

I am happy to say that I liked this book! One of my many bookish goals this year is to read all of the Friday the Thirteeners books (check out their blog! They have cool stuff every Friday!). I own all of the books that have been released (ten of them) in some format, but as of right now, I've only read... five of them. This is one of the five!

Anyway, this one was pretty great! I love historical fiction. This book takes place in the old western Colorado times when people hated Native Americans and were totally prejudiced against them. Maggie's hometown is one of several that were burned down - supposedly by Apaches. But Maggie knows better - her Apache friend from school saved her. The Apaches are not the ones behind the fires and violence and death.

Maggie meets the illustrious Alvar Castilla in a relic factory. Maggie has a strange affinity for relics, as she is able to sense them better than most. Alvar discovers this when they meet, and offers Maggie a place at his home, in exchange for her services with relics. Maggie declines. Though she doesn't love her job with Adelaide at a saloon, she loves her friends, and when she meets Landon, she starts to fall in love with him.

But the law officials starts to move against the Apaches. And then Maggie's sister gets into trouble, and is in desperate need of medical attention. Maggie accepts Alvar's offer to live at his house and become acquainted with his relics, for Maggie's health and well-being.

I love the historical aspect of this book. Ms. Collins does her research so well - I can tell she knows what she's talking about, in terms of Old Colorado. Maggie's voice is unmistakable, and completely authentic, in my opinion.

The plot of the story is pretty good. I was interested the entire time, right up until the end. The end kind of did not hold my interest, and I sort of skimmed it. I mean, I read it, but not as thoroughly as I read the rest of the book. But Ms. Collins definitely takes her readers on a ride! Everything about the relics and the powers and the mystery is so intriguing! I almost forgot that somehow, the burning towns have to connect to the relics. It all comes together at the end!

The romance is sweet. Poor Landon has to deal with Maggie and her shenanigans. First, she flat-out rejects him. Then she likes him. Then she leaves him (and everyone) when she goes to live with Alvar. Then she gets jealous because she's seen with someone else. Then they have a totally hot make-out session. Then... the climax and the end of the book (in terms of the romance) was surprising. Read it to know what I mean!

All in all, I enjoyed this book, and I'm pleased to have had the chance to read it early!

There were small things that bothered me. Like, for one, I really hated Maggie's sister. She's conceited, selfish, a total brat, rude, ungrateful, and she's like, seven? Ten? Somewhere around there. It's not like she was SPOILED when their parents and brother were alive. I don't know or understand why she expected royal treatment the duration of the book. Gosh, I hate her so much. HATE. HER.

And like I said above, I kind of lost interest in the very end of the book. I didn't read it quite as closely as the rest of the book, mostly because I seriously did not understand what was going on. I re-read the end twice, and I still don't understand some thing. Whatever. I get the gist of things.

And I totally feel bad for Alvar, despite his sleaziness.

Yep! If you like historical fiction books, check this one out! This book shared a different time in history than I'm used to, but I really liked it and I'm satisfied with the historical aspect of the book, as well as mostly everything else!

3.5 stars -> rounded up to 4 stars. I like giving debut authors the benefit of the doubt. And I really did enjoy this book! 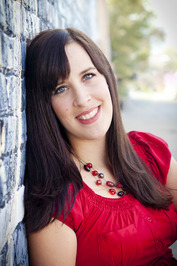 Renee Collins graduated from Brigham Young University with a degree in History, and currently lives with her family in the shadow of the Colorado red-rock cliffs, thugh she hasn't unearthed a relic. Yet. Relic is her first novel.