Blog Tour Interview with Nyrae Dawn and Jolene Perry, authors of Out of Play (and GIVEAWAY)! 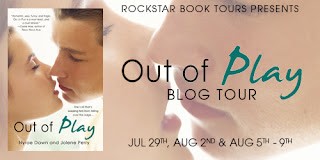 Welcome to the Out of Play tour! Today, I have an interview with the two lovely authors, Nyrae Dawn and Jolene Perry, and a giveaway!

Read my review of this book HERE.


Alyssa: Hi, Nyrae! Hi, Jolene! Thank you both so much for joining today on my blog!

Nyrae: Hey! Thanks so much for having us!

Jolene: Happeee to be here :-D

Alyssa: So, Nyrae. What was your experience like, writing with Jolene? I hear there is a huge time zone difference between you and Ms. Alaska over there ;)

Nyrae: LOL. It’s not a huge difference. I think only an hour? But it worked great. The cool thing about Jolene and I is with both get obsessive and in the zone. It works well for us and we write like crazy when we work together.

Alyssa: Shows how much I know about time zones O_O And you, Jolene? What’s it like to write with Nyrae?

Jolene: She is so awesome. We always have a blast.

Alyssa: In a time of so many contemporary romance releases, how did you make Out of Play stand out?

Nyrae: OUT OF PLAY is actually a YA book. It straddles the line a little and I keep seeing people describe it as NA but it’s YA. Penny is actually 17 and in high school for most of the book. Bishop is in a band, but he’s only 18. I think OOP stands out for a couple reasons. The characters are one. We have this tough, strong, female hockey player (in high school) as one of the lead characters. Then we have the Los Angeles rock star who is stuck in small town Alaska, so the setting feels a little different, IMO too.

Jolene: My hope is that the Alaskan small town thing, and the rock star thing will help… We both wrote characters with BIG egos, so that was a lot of fun.

Alyssa: What’s one thing that you both couldn't agree on in Out of Play? How did you resolve the problem – compromise?

Nyrae: Hmm… Jo might remember something I don’t but I don’t think there was anything we couldn't agree on. We’re both really easy going people.

Jolene: We’re both laid back. I don’t think a collaboration would work w/ disagreements. You go into it with the idea that the story doesn't belong to just you and sometimes when she’d send me a chapter with something unexpected, it became a fun puzzle to work with.

Alyssa: Who came up with the title? How did that process work?

Nyrae: It actually started out being called MISPLACED and Jolene came up with the title. I came to her with my rock star stuck in the small town and she created Penny and the title.

Jolene: And then Entangled thought we could do better. Out of Play is a hockey term, but it suited both Penny AND Bishop so it feels pretty perfect.

Alyssa: Jolene, what is something that you must have when writing?

Jolene: A computer. Really. That’s it. Stuff I LIKE to have?? COLD Pellegrino in a big glass bottle and trail mix.

Alyssa: Mmm, trail mix ;) What are you two currently reading? How is it?

Nyrae: I actually just finished reading MY FATE FOR YOURS by Jolene and Steph Campbell. Loved it.

Jolene: I’m reading a book called Adorkable by Sarra Manning. And it’s living up to the title. I’m about to read Nyrae Dawn’s book, Rush, but that one won’t be available until spring 2014 I don’t think. (but I've read the first few chaps and it’s AHmazing)

Alyssa: LUCKY! I can't wait read Rush! And I loved My Heart For Yours - but I haven't read My Fate For Yours yet. What’s the largest amount of words you've ever written for the final draft of one of your books?

Nyrae: You mean the largest word count overall for a book? I think OUT OF PLAY might be the longest. That or FAÇADE.

Jolene: My first book. I had NO idea what I was doing and I wrote a horribly bad story that was about 120,000 words.

Alyssa: That... that is pretty long, Jolene! I'm sure it wasn't as bad as you think it was :) Nyrae, what are you currently working on - something new? Anything contracted?

Nyrae: I’m currently working on RUSH, which releases next year from Forever Romance. It’s a LGBT, NA book about a guy who plays college football and is likely going into the draft for the NFL but he’s hiding that he’s gay and in love with another guy.

Alyssa: Jolene? What about you? What are you currently working on?

Jolene: Right now I’m working on edits for a book called The Summer I Found You, which comes out from Albert Whitman Teen in March 2014. It’s about a 19 year old guy who lost his arm in Afghanistan and is putting his life back together and a totally neurotic girl who is diabetic. They made a fun couple and it’s hands down my fav-ever sex scene ;-O Also, I’m pretty sure I’ll have a cover to share by the end of August…

Alyssa: And that’s all for today! Thank you so much for stopping by my blog, Nyrae, Jolene!

Nyrae: It was fun. Thanks for having us.

Writing has always been Nyrae Dawn’s passion. There have been times in her life where she wasn’t able to chase that dream the way she desired, but she always found her way back to telling stories.

One of her loves has always been writing about teens. There’s something so fresh and fun about the age that she loves exploring. Her husband says it’s because she doesn’t want to grow up. She doesn’t think that’s such a bad thing and luckily for her, he doesn’t either.

Nyrae gravitates toward character-driven stories. She loves going on emotional journeys with characters whether it be reading or writing. And yes, she’s a total romantic at heart and proud.

Nyrae resides in sunny Southern California with her husband (who still makes her swoon) and her two awesome kids.

When she’s not with her family, you can be pretty sure you’ll find her with a book in her hand or her laptop and an open document in front of her.

She writes for Entangled Publishing, Grand Central Publishing and is self-published.

Nyrae is represented by Jane Dystel of Dystel and Goderich Literary Management.

Jolene grew up in South-central Alaska. She’s lived in Anchorage, near the Alyeska ski resort, on a cabin on an island on a lake, and then in a boring old house.

Jolene plays the guitar, takes pictures, and loves to hike. She doesn't like rivers, but loves the ocean. She loves to fly, but gets motion sick. Her ultimate vacation would be to sail through the deserted islands in The Bahamas. Two years ago, she got that wish when her parents retired on a sailboat.

She taught high school French when she was only a few years older than her students, and then taught middle school math with her degree in political science and French.

She spends grocery money on designer fabric, shoes, and books.

Jolene cannot express how many times she wished she could write a whole novel. And now she has. Many times. Life is good. 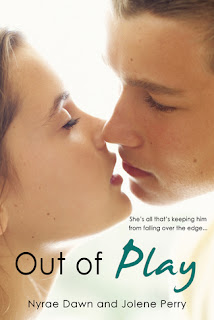 Rock star drummer Bishop Riley doesn't have a drug problem. Celebrities—especially ones suffering from anxiety—just need a little help taking the edge off sometimes. After downing a few too many pills, Bishop wakes up in the hospital facing an intervention. If he wants to stay in the band, he’ll have to detox while under house arrest in Seldon, Alaska.

Hockey player Penny Jones can't imagine a life outside of Seldon. Though she has tons of scholarship offers to all the best schools, the last thing she wants is to leave. Who'll take care of her absentminded gramps? Not her mother, who can’t even be bothered to come home from work, let alone deal with their new tenants next door.

Penny’s not interested in dealing with Bishop’s crappy attitude, and Bishop’s too busy sneaking pills to care. Until he starts hanging out with Gramps and begins to see what he’s been missing. If Bishop wants a chance with the fiery girl next door, he’ll have to admit he has a problem and kick it. Too bad addiction is hard to kick…and Bishop’s about to run out of time.