Review: The Beginning of Everything by Robyn Schneider 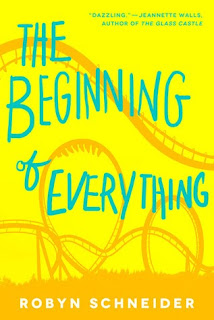 Golden boy Ezra Faulkner believes everyone has a tragedy waiting for them—a single encounter after which everything that really matters will happen. His particular tragedy waited until he was primed to lose it all: in one spectacular night, a reckless driver shatters Ezra’s knee, his athletic career, and his social life.

No longer a front-runner for Homecoming King, Ezra finds himself at the table of misfits, where he encounters new girl Cassidy Thorpe. Cassidy is unlike anyone Ezra’s ever met, achingly effortless, fiercely intelligent, and determined to bring Ezra along on her endless adventures.

But as Ezra dives into his new studies, new friendships, and new love, he learns that some people, like books, are easy to misread. And now he must consider: if one’s singular tragedy has already hit and everything after it has mattered quite a bit, what happens when more misfortune strikes?

Robyn Schneider’s The Beginning of Everything is a lyrical, witty, and heart-wrenching novel about how difficult it is to play the part that people expect, and how new beginnings can stem from abrupt and tragic endings.

This book was totally not what I was expecting! I remember when I requested it from Edelweiss - I think it was one of the first books I requested, and one of the first books for which I was approved. So, I've had this one for quite some time! I wasn't feeling contemporary novels for a while, but eventually, I pulled myself out of my contemporary funk, buckled down, and started this book.

The story begins with Ezra's accident, which leaves him with barely any use in his legs. At a party, his girlfriend broke up with him, and when he was leaving, a black SUV drove straight into Ezra's car. He can walk, but only with a cane. He cannot play tennis anymore. When school starts, he fins that things aren't the same between him and his tennis friends. So, he becomes friends again with a boy that he grew up with, but no longer hung out with for quite some time.

Toby, the friend, is part of the Debate team, and so are his friends. So Ezra goes from being labeled the popular, Golden boy, to the crippled nerd. Enter Cassidy, the new girl, who was the rival school's top debater. Cassidy and Ezra slowly build a relationship, starting with both of them unknowingly signing up for the debate team.

Cassidy and Ezra's relationship is beautiful to watch, but there was always something about Cassidy that bothered me. Ezra knew she was hiding something from him, but he can't help liking her. They enter a boyfriend-girlfriend relationship, and they go on the debate field trip, and they hang out like a normal, wonderful couple.

The addition of Toby as Ezra's friend is perfect and awesome! I loved Toby's role in this book. All of Ezra's new friends are welcoming and nonjudgmental, and they do and don't expect much from Ezra. Ezra's old friends expected him to hang out with them like a normal day, but obviously, he couldn't play tennis with them. And don't get me started on his weird ex-girlfriend.

The climax of this book is not surprising, as Cassidy's strange behavior merits, but the ending is slightly heartbreaking. I absolutely love the ending, but it's a bit sad. I think all the characters got what they deserved (good or bad). I'm happy with the way this one ended!

I just found this one a bit boring, but it seems like not much happens. I like seeing the progression of Cassidy and Ezra's relationship, but I feel like this book was solely based around their relationship and Cassidy's big secret. Nothing else really matters in this book, which is kind of annoying, because I wouldn't call this book contemporary romance. Contemporary, yes, romance, eh. I just wish there could have been more to the plot, you know? It seemed to simple and boring.

Sure! The "romance" part of this book isn't steamy or chemistry-filled, but this book is a great contemporary read that delivers an amazing and powerful message to its readers.

4 stars. I really liked this one, and I hope you do too!