Review: I Married the Duke by Katharine Ashe 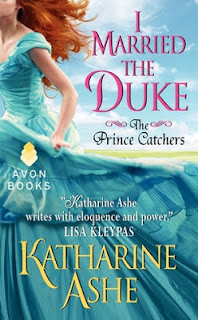 Three very different sisters beguile society with their beauty and charm, but only one of them must fulfill a prophecy: marry a prince. Who is the mystery Prince Charming, and which sister will be his bride?

On the way to marry a prince in a castle, a lady should never:

1. Bribe an infuriatingly arrogant and undeniably irresistible ship captain,
2. Let him kiss her senseless on a beach,
3. Battle thieves at his side,
and
4. Exchange wedding vows with him, even under the direst circumstances.

But daring, determined Arabella Caulfield isn’t just any lady. And Luc Westfall is no typical ship captain. He’s the new Duke of Lycombe, and to defeat a plot that could destroy his family he must have an heir. Now he knows just the woman for the job . . . and he’s not above seduction to turn this would-be princess into a duchess.

This book was cute and hilarious and exasperating (in a good way) all at the same time! I absolutely loved the first half of the book, and while I didn't enjoy the second half as much, I liked it! Overall,, this book was pretty good! Not a new favorite, but a great read.

The summary is pretty spot-on. I love how it's broken up, into a list form and paragraphs. Pay attention to that list. It's important in this novel (hint hint)!  While Arabella didn't really bribe the ship captain, she did have to work her cleverness on him in order for him to bring her aboard. The ship isn't a passenger ship, and most certainly not for ladies.

Anyway. So this book is basically split into two parts. One, with Arabella and Luc on the ship and when they disembark, and two, when they are at the Prince's castle, where Arabella is supposedly going to work. I loved the first half of the book, because the interactions between Arabella and Luc were so sweet and steamy and THERE. In the second half, there are quite a few interactions, but they are tempered with Arabella's refusal to be around Luc (for whatever stupid reason she conjured).

While Arabella and Lux were on the ship, neither could deny the attraction between them. While Arabella doesn't know that Luc is also a Duke, she knows that he is important among his men and his ship. Their interactions on the ship are filled with humor and banter and chemistry. Even when they get off the ship, and stay in town for the festival to pass, sparks fly and neither can resist one another.

But then Luc is attacked, and Arabella is told that he is dead, and that she should go to the Prince's castle to accept the job she was offered. But he didn't die. He wasn't even injured THAT badly, and he makes a full recovery. However, just before he "died", his friends convince Arabella that she needs to marry him.So, they get married, while he is injured and possibly dying.

So, when Arabella arrives at the Duke's palace, she stays there for a few days, brokenhearted, until the Duke of Lycombe arrives. Luc. For some twisted, deranged reason, Arabella is so angry with Luc, because she believes that he doesn't love her, and that they shouldn't be married, and that she doesn't want to be a duchess. WHATEVER, girl.

One thing I'd like to point out that I liked is that Luc isn't perfectly perfect in his masculine form. He has scars, and while that might make him imperfect to some, it just makes him more masculine to Arabella. And apparently, he's still quite good-looking. Can't go wrong with scarred AND good-looking.

But all's well that ends well! I really like this book, despite my slight annoyance with Arabella in the second half of the book. The back-story, the past of Arabella and her sisters, is really cool. One of them is destined to marry a prince! It wasn't Arabella... which of the sisters will it be?!

Like I've already mentioned, I didn't enjoy the second half of the book AS MUCH. It was still pretty great, especially since the ending was nice, but I didn't like it as much as I LOVED the first half of the book. Arabella and her weird self, trying to break of the marriage,just didn't sit right with me. I mean, any idiot could have that Luc loved her! Well, except her - she couldn't see it. It's always like that though, right?

Basically, if a duke married me (in the time period of the book), and he loved me, and he wanted to STAY married to me, and he was filthy rich? I wouldn't be going ANYWHERE. Or complaining. Or pushing him away. Especially if he's hot. And loves me. Full package of yummy!

Hmmm. There are definitely better historical romance novels that I liked more (despite the fact that I'm giving this one four stars). BUT, this one is pretty great. If you've got time (and money, I suppose), then read this one! It's not a must-read, but you'll most likely enjoy this book if you read it, I'm sure!

4 stars. I can't wait to read the next two novels in this series! I just wish they were coming out sooner.