Review: The Crown of Embers by Rae Carson 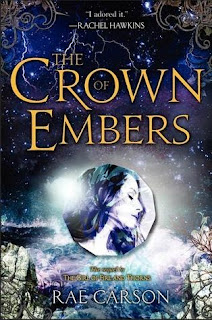 In the sequel to the acclaimed The Girl of Fire and Thorns, a seventeen-year-old princess turned war queen faces sorcery, adventure, untold power, and romance as she fulfills her epic destiny.

Elisa is the hero of her country. She led her people to victory against a terrifying enemy, and now she is their queen. But she is only seventeen years old. Her rivals may have simply retreated, choosing stealth over battle. And no one within her court trusts her-except Hector, the commander of the royal guard, and her companions. As the country begins to crumble beneath her and her enemies emerge from the shadows, Elisa will take another journey. With a one-eyed warrior, a loyal friend, an enemy defector, and the man she is falling in love with, Elisa crosses the ocean in search of the perilous, uncharted, and mythical source of the Godstone's power. That is not all she finds. A breathtaking, romantic, and dangerous second volume in the Fire and Thorns trilogy.

I am ACTUALLY kicking myself for not reading it sooner. I got an ARC last summer, thanks to Epic Reads, and I never took the opportunity to read this one. To be honest, I am definitely scared of sequels - more scared of sequels than I am scared of conclusion books. And the other deterrent? I read The Girl of Fire and Thorns years ago. I literally remember NOTHING from book one, except the deaths of Humberto and Elisa's husband. When I cracked book two, a few things started to come back... but I especially didn't remember Hector being so, um, prominent in book one.

Anyway. I really liked this book! I believe that when I read book one, I liked it, but I couldn't really see how the series would work out, and how the romance would work out. But this book is an EXCELLENT sequel, and in my opinion, takes the series in a much different path than I expected. In a good way!

To sum it all up in a really concise way, Elisa needs to find the all-encompassing source of power that will fuel her Godstone, making her and the Godstone crazy awesome and possibly invincible (or something). She and her suitor Tristan, and her not-so-much-appreciated "friend" Belen, and Hector, and other friends of Elisa help her travel to find this mythical source of power. But I'm getting ahead of myself. That's the second half of the book.

The first half of the book deals with Elisa and her new role as queen. Her husband is dead, and she is left with a riotous kingdom, a little crown prince, and a mess, really just one big mess. There is an assassination attempt on her life, which slows her, and there are times when she needs to show her power and stand as queen. Those scenes are heartbreaking - especially the poison/kitchen scene.

I think that Carson does a great job of showing growth in Elisa. I remember what Elisa was like in book one (and I didn't really like her, which is one of the reasons why I didn't care to remember the book), but I think from book one to book two, Elisa has developed substantially. I love the new Elisa - she is decisive even when she is unsure, she is willing and determined even when she has opposition.

The plot of this book is, as I said before, divided into two sections: the kingdom, and the journey to the zafira (the source of power). There are new characters in this book - plenty - such as Mara (I don't remember her being in book one. She wasn't - right? I know she has her own novella), Storm (loveeee him), and Tristan (he's cool). And the Quorum members. I don't like the Quorum. But neither does Elisa.

The romance. Okay, to be completely honest, I found the "romance" in book one, with Alejandro, and Humberto, really, really unsatisfying and unbelievable and trivial. I expected better of Elisa, and of Carson, and that was one of the reasons why I was disappointed and nonchalant about book one - because the romance was blah. And both of those men die at the end of book one.

So, the romance in this book? I didn't see it coming. If I hadn't read the end of this book (oops...) before reading the whole book, I would have been completely thrown. Heck, I WAS completely thrown, when I peeked at the ending! But I loved the romance! Hector is... dreamy. And seriously the BEST male protagonist and love interest that I have encountered in a really long time. He is seriously a good guy. Like, a good guy, with very little issues and crappy pasts and problems and everything. He's honorable and selfless and he genuinely cares about Elisa. And she cares about him!

The ending: I WILL NOT SPOIL IT, but, WHY DO AUTHORS ALWAYS DO THIS IN THE SEQUEL!? In trilogies, I've noticed that authors will have a great first book, and then a crazy, series-changing sequel with an insane, heartbreaking ending, and then a crazy conclusion that is full of bloodshed or the equivalent of a ton of wars and violence overcome.

WELL. I'm so glad that I didn't have to wait to read The Bitter Kingdom. I've had that one since early winter 2013 - I just needed to read this one to read book three. And I already have (tomorrow's review), so be ready for that!

There isn't much that I didn't like about this book. I wanted a tad bit more from the romance, but what Elisa decides in the end (the very end) is good enough for me. AND, I already read book three, so I can't complain. UGH, focusing on book two here. It's hard because I read this book a few weeks ago, and I'm typing my review way after reading the book.

Anyway. The ending is also extremely heartbreaking and unexpected and it totally crept up on me! Remember how I said I peeked at the end? Well, after reading the ENTIRE ending, I was like, what?! Stupid Ximena. I never really liked her. But she's a good person. Sort of.

I just did LOVE this book, like I LOVED book three. Funny, because they both got the same rating though.

YES! This book does not fall victim to the sequel slump or sophomore slump or whatever it's called. I had no reason to be afraid of reading this sequel. *kicks self*

4 stars. If you haven't started this series, you should! And if you're like me, and couldn't remember book one, don't worry! You'll be fine! And if you didn't like book one... keep reading. I promise it gets better. And BETTER ;)