Review: A Tale of Two Centuries by Rachel Harris 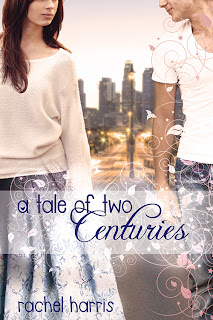 You all know I have sequel terror, right? No? Well, I'm totally afraid of sequels. First books in a brand-new series? Bring it on. Sequels? Not so much. Sequels terrify me for so many reasons: what if I wasn't wild about book one? What if I don't remember most of books one? What if the sequel sucks, and is one of those sophomore slump novels? What if, like most sequels, the sequel ends in a heartbreaking cliffhanger? Should I just wait for the third book (assuming it's a trilogy)? That's actually what I've been doing recently... waiting for the series to finish, then binge reading.

Well, I am thrilled to say that this book did not fall victim to the sophomore/sequel slump! I loved this book - maybe not as much as I loved My Super Sweet Sixteenth Century - but I loved this one nonetheless. Ms. Harris does an excellent job of bringing us back into the series, but keeping us interested in an entirely different world.

Alessandra - "Less" - has been brought to Cat's world, the modern world of Hollywood. The beginning of the novel starts with Less in sixteenth-century Italy. Something absolutely heartbreaking happens, and eventually, Less finds her way to Reyna, and appears in Cat's world. The thing is, in Less's sixteenth-century world, it has been two years since Cat arrived, making Less sixteen. But when Less arrives in Cat's world, to Cat, it's only been two months. So, they're the same age.

In my opinion, Less assimilates beautifully. It is HILARIOUS to watch a girl from the sixteenth century try and become a modern girl. She has to learn to dress herself, to wear more revealing clothing (oh, the thong scene), to go to high school, to avoid falling in love with hot, temperamental boys...

Less is really into acting, if you remember from the first book. She lands the part of Juliet in this play, opposite another swoonworthy guy that doesn't stand a chance. But that's basically what this book is about: Less assimilating, Less going to high school Less hanging out with Austin, Less matchmaking (I'll explain), and Less acting in the play.

I love how Less tried her hand at matchmaking - basically forcing Cat and Lucas together. Cat and Lucas already wanted to be together - especially Lucas - but Cat was scared of being with him, because of her Hollywood status. Thanks to a few nudges from Less, they do start building a more intimate relationship. YAY for that!

This book has a fantastic ending! I had a feeling it would end the way it did. But Ms. Harris spun this story beautifully, and you could only feel that the ending is perfect, especially for Less. I'm very happy with this book!

Hmmm, I liked basically everything about this book, because it was an all-around good book. But I feel like it was a tad predictable, in the plot, the romance, the ending... maybe that's just me though. When a new scene unfolded, I knew exactly where it would lead, and exactly how it would fit into the plot. This is nice, but I was never surprised. I like being surprised. Not being surprised can make a story... kind of boring. Not so with this book, but it could have been.

YES! You can read this book without reading the first book. But I recommend you read both! Ms. Harris's books are fantastic, and this book is no exception. Anyone can enjoy and love this series!

4 stars. YAY for an awesome sequel! I can't wait to read the next book - back to Cat!