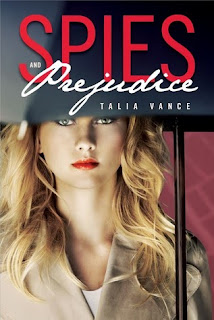 Berry Fields is not looking for a boyfriend. She’s busy trailing cheaters and liars in her job as a private investigator, collecting evidence of the affairs she’s sure all men commit. And thanks to a pepper spray incident during an eighth grade game of spin the bottle, the guys at her school are not exactly lining up to date her, either.

So when arrogant—and gorgeous—Tanner Halston rolls into town and calls her “nothing amazing,” it’s no loss for Berry. She’ll forget him in no time. She’s more concerned with the questions surfacing about her mother’s death.

But why does Tanner seem to pop up everywhere in her investigation, always getting in her way? Is he trying to stop her from discovering the truth, or protecting her from an unknown threat? And why can’t Berry remember to hate him when he looks into her eyes?

With a playful nod to Jane Austen, Spies and Prejudice will captivate readers as love and espionage collide.

I really thought I would enjoy this book more! I loved Talia Vance's other book, Silver, and I had high hopes for Spies and Prejudice! The synopsis drew me in, and the beginning of this book was AWESOME. Vance introduces us to most of the main characters in the very beginning of the story, and she sets the tone of the story quickly.

Berry is wearing a pair of glasses that take high resolution photos. She also has something that amplifies sound, and she overhears the two cute boys talking. One of them says that she, Berry, is "nothing amazing". Sounds like Pride and Prejudice, right? When Mr. Darcy says that he is not really impressed with Elizabeth? Anyway.

The two boys come over, effectively ruining Berry's spying. Berry immediately dislikes the boy that called her "nothing amazing" - Tanner. But Mary Chris really like his brother, the other boy - Ryan. Berry gets away from the restaurant to follow the two people she was originally spying on - and hears something else. She sneaks up on a man and a woman talking. One of them has a file - with her mother's name on it. There's a catch: Berry's mother has been dead for quite some time.

So that's how our story begins. Berry wants to know why her mother's name was on that file, and how her mother REALLY died. She enlists the help of Drew, a hot boy from school, and tries to bat away the attention of Tanner. But Ryan likes Mary Chris, and so Tanner and Berry see each other often.

The story is kind of interesting, but for me, it tapers off pretty quickly. Or, at least, my interest did. Things just got too weird and not-interesting, and even the semi love triangle couldn't bring me back to the world of interested, especially when I knew which way the love triangle was going the whole time.

I like how Ms. Vance twists the story, especially with Tanner and Ryan and Drew's roles, but I find it hard to believe that teenager had that much access to classified information. Most of this story was a bit unbelievable. And I know, fiction is usually beyond normal. But I feel like the author didn't do a good enough job of convincing me that the story is real.

The story ends well, romance and everything. I'm still confused, but, well, yeah.

Like I said above, the author didn't do a good enough job of convincing me that this story could be a real story. I just didn't see how Berry and Mary Chris and Drew and Ryan and Tanner were that invested in serious top-secret information.

Also, the love triangle was annoying. It's obvious which boy is the winner, but still. I felt bad for the other boy, even though he's spun as a bad guy by the end of the book. And I wasn't completely suckered by the "winning" love interest. There was one scene, where the boy and Berry are in Mary Chris's father's office, and they kiss - that was pretty convincing! But I feel like we as readers don't get a good enough read on one boy (the "winning" love interest).

And like I said before, my interest went away pretty quickly. The first scene at the restaurant is AMAZING. I'm not really sure about the rest of the book. I can't even remember most of it, and I didn't read it too long ago! But I know that I was disinterested and slightly bored for the rest of the book. Good thing it wasn't too long!


Not really. If you're not dying to read this one, skip it! While I enjoyed it for the most part, I won't be reading it again. But I will be reading Gold (Silver's sequel), and I will read any other books Ms. Vance writes!

3 stars. Good, but not amazing. I wish I could have liked it more! I had such high hopes for this one.