Review: A Little Too Far by Lisa Desrochers 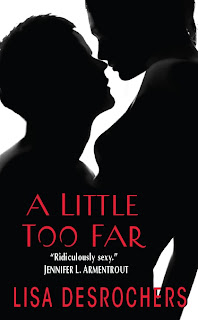 A Little Too Far by Lisa Desrochers
Book One of the A Little Too Far series
Publisher: William Morrow
Publication Date: September 17, 2013
Rating: 4 stars
Source: eARC from Edelweiss

Yep. She just had mind-blowing sex with her stepbrother. In her defense, she was on the rebound, and it’s more of a my-dad-happened-to-marry-a-woman-with-a-super-hot-son situation. But still, he’s been her best friend and confidant for the better part of the last few years … and is so off limits. It’s a good thing she’s leaving in two days for a year abroad in Rome.

But even thousands of miles away, Lexie can’t seem to escape trouble. Raised Catholic, she goes to confession in hopes of alleviating some of her guilt … and maybe not burning in hell. Instead, she stumbles out of the confessional and right into Alessandro Moretti, a young and very easy-on-the-eyes deacon … only eight months away from becoming a priest. Lexie and Alessandro grow closer, and when Alessandro's signals start changing despite his vow of celibacy, she doesn’t know what to think. She’s torn between falling in love with the man she shouldn't want and the man she can’t have. And she isn't sure how she can live with herself either way.

I think that was the case with this book, A Little Too Far. I helped reveal the cover of this book - twice - and so that's were I had heard of it. To me, it doesn't sound like a typical NA contemporary romance book. At least, I haven't read an NA book that deals with step-siblings falling in love. Or one moving to another continent. Or Catholic deacons.

Honestly? I wasn't going to request this one. I help with the two cover reveals because I like William Morrow, but I really wasn't THAT interested in this book. I am so glad that I was in the mood for a romance read, because the day I downloaded this book, I devoured it!

This book starts with Lexie seeing and talking to her ex - the boy she dated for quite some time. She broke up with him, but after she found out that he was not being faithful. He wants to get back together, but she wants none of that. When she goes home, she talks to Trent (her stepbrother). They drink Scotch (I think it was Scotch) and play Warcraft. Then things get... heated.

Blame it on the situation, the drink, the hormones, the denied feelings... but Lexie and Trent have sex, and both of them want more. A few days later, Lexie is in Rome. For the next couple of months (I think it's actually eight). W=She meets Alessandro the Catholic deacon when she is sent to do Hail Marys for her sins. They are set to work on a project together. He's cute for a priest-to-be... and not that much older than Lexie.

I absolutely LOVE the path Desrochers chose on which to to place  Lexie. The couple had crazy awesome sex, and then are separated. I like this diversion in the plot - because it then makes it hard for the couple to have sex... which is usually a huge theme in NA contemporary romance novels.

In fact, guess what. I think there are a total of THREE sex scenes in this book, and one almost-sex-scene. That's IT. There aren't that much sexy foreplay scenes, and a ton of flirting and teasing, on any of the parties' part. Like, Lexie and Trent DEFINITELY have chemistry, but it's not oozing off the page in a turn-off way. fa444aand Alessandro have chemistry as well... but I found that their relationship was different than Lexie and Trent's relationship.

That's something I loved - this book isn't FILLED with sex, like most NA contemporary romance novels. There was so much more to this book than sex and angst over loving one or the other or whatever. And also? I hate love triangles, but the love triangle in this book is not one that I hated. I didn't love it, but it wasn't too bad, in terms of the role it played in this book.

But back to Rome. Desrochers really did her research, because the way she described everything was beautiful and authentic. The setting is so well-written.Sometimes, readers don't notice when the setting is amazingly written - but they do notice when it is poorly written. The setting of this book is fantastic.

Okay, let's talk romance. From the start, I could see that Lexie and Trent had a really deep, powerful relationship, and I'm not talking about sex or lust. They're best friends. They trust each other wholeheartedly. Then they have sex, and they want more from each other. That's a progressive relationship that I could see happening and lasting, even with Lexie going to Rome for many months.

Lexie's relationship with Alessandro is different. There is chemistry, but there is always the barrier of his upcoming priesthood. Of course, he rethinks the whole thing as the book goes on, but it's always there. I honestly thought Lexie and Alessandro were better off as friends, because they had a sweet, considerate relationship that I adored.

Lexie knew she had to make a choice - and she knew that whatever choice she made would hurt someone. At the end of her Rome study, she had an internship opportunity to stay in Rome. She could stay in Rome, with Alessandro! Or, she could go back, but would Trent be waiting for her? Lexie doesn't whine or moan or act stupid when it comes to this decision. She knows she is causing conflict for Alessandro - because she could mess up his life, just by being in it. He was rethinking his priesthood - possibly leaving it, for her. Lexie doesn't take anything lightly, but she doesn't moan and complain all the time.

I'm not going to tell you who Lexie chooses, but there are more books in the series, and each of the books is centered around someone from book one, so... if you want to spoil this book (in terms of the romance) for yourself, go look up book two and book three. But don't.

I loved the ending of this book. It's imperfectly perfect, and it's beautiful.

I just... feel really bad for Alessandro? He's such a cool guy, especially for a deacon (member of the clergy). Lexie never really led him on, in my opinion, but I feel bad for him, because he loves her, and she was confused throughout the book, and poor Alessandro! His past is sad, and his present is sad, and I really hope his future isn't.

YES! Remember how I said I didn't like New Adult contemporary romance novels - at least, the vast majority of the ones I read? Well, I really liked this one. Nudge, nudge.

4.5 stars -> rounded down to 4 stars. I rounded down because ALESSANDRO I FEEL BAD FOR YOU! But seriously. This book is awesome. And it's relatively cheap in price! Go read it!