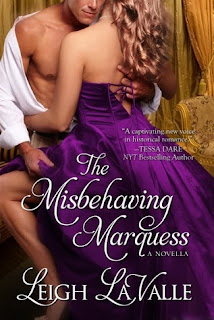 Having awaited the return of her husband for half a decade, Catherine Raybourne, the Marchioness of Foster, has no intention of reconciling with her misbehaving marquess. But when he insists he needs an heir-immediately-she must confront her own lingering desires. Can she protect her heart while attempting to win his once again?

This book is extremely short - novella short - but I really liked it! You all know how much I enjoy historical romance novels. This one was uploaded to NetGalley recently, despite being released last year in October. While this one isn't a full-length novel, I enjoyed the story and the characters and the cute romance!

Catherine's husband Jamie, the Marquess of Foster, finally returns home after five years. When he left five years earlier, the two of them were not on good terms. Jamie was angry because he thought that Cat did something to hurt him, while Cat was angry at him for believing such a thing. After he left, he never contacted her.

So when he returns, at the beginning of this novella, Cat is very frustrated with him. He doesn't believe her about the thing that they argued over (five years ago), he doesn't want to talk to her about anything, and he seems cold towards her. Cat still has feelings of love and attraction towards him, but he can't shake his uncaring attitude. She decides she wants a divorce.

Jamie is still hurt over the supposed betrayal of his wife. He returns home because of a funeral, I believe, but he doesn't want to deal with his wife. His mistake is not communicating with her effectively, because her mention of the divorce surprises him.

Basically, it takes the duration of the story to remind the two of them how much they loved and love each other.Cat and Jamie settle their differences and come to terms with the past. There is a happy ending! The romance is sweet and steamy at the same time. There's no doubt that both of them are still very attracted to each other, even after five years.

I sort of wish that I had known beforehand that this was a novella, and not a full-length novel! When I reached the end, I was like, THAT'S IT!? Of course, that's my fault, but I still thing a full-length novel of this story would have been more... impressive!

And I never fully understood what Cat supposedly did to betray Jamie and make him so angry that he left to sail around the world for five years. She says she didn't do the thing, and eventually, he believes her, but what exactly is the "thing"? I have ideas, but I don't really know for sure. Somehow, I missed that!

If you're in the mood for a really short, sweet, historical romance novella, then yes! You can't go wrong with this one, because it's really short and cute!

4 stars. I'm glad I got the chance to read this one!