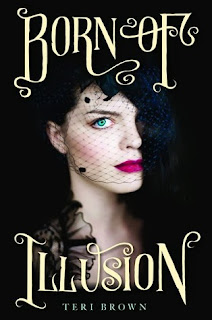 Anna Van Housen is thirteen the first time she breaks her mother out of jail. By sixteen she’s street smart and savvy, assisting her mother, the renowned medium Marguerite Van Housen, in her stage show and séances, and easily navigating the underground world of magicians, mediums and mentalists in 1920’s New York City. Handcuffs and sleight of hand illusions have never been much of a challenge for Anna. The real trick is keeping her true gifts secret from her opportunistic mother, who will stop at nothing to gain her ambition of becoming the most famous medium who ever lived. But when a strange, serious young man moves into the flat downstairs, introducing her to a secret society that studies people with gifts like hers, he threatens to reveal the secrets Anna has fought so hard to keep, forcing her to face the truth about her past. Could the stories her mother has told her really be true? Could she really be the illegitimate daughter of the greatest magician of all?

It's a known fact that I don't read too much fiction set in the 1900s. I like historical fiction that is set in the 19th century and before, and modern fiction. But fiction in the 20th century... for some reason, it's never really appealed to me. So I was really hesitant to read this book, though I was curious about the magic described in the synopsis.

I wasn't overly impressed with this book, but I still found the idea of the book very interesting. The main character, Anna, has exceptional skills with magic and illusions. But she's more than a girl with magic tricks - she seems to be a medium, who can communicate with spirits and see things in the future. So, as an illusionist working with her mother, she has to be careful with her gift as a medium.

I liked Anna, and I don't think I ever got frustrated with her as a character. It was easy to follow her decisions and thoughts throughout the novel. I don't know much about the 1920's and how young ladies are supposed to act, but I assume the author did a good job with the authenticity of Anna's character.

The romance was kind of silly, in my opinion. There is a "love triangle", but it's pretty obvious from the beginning which guy Anna really likes. I saw right through the secondary love interest, as soon as we meet him.

The plot was not that interesting, in my opinion, but it wasn't hard to finish this book. I was interested and invested enough to make it through the book, especially once I hit the climax. I wanted to know what would happen, but at the the same time, I had an excellent idea of what would happen. And it did happen. Predictable end.

I think my biggest problem with this book was that the plot wasn't all that engaging, and I was sort of bored the entire time. I knew that I wasn't going to NOT finish this book, but at the same time, I sort of skimmed parts of this book. I wasn't really sucked into the plot, though I did think it was kind of interesting. It seems like the first part of the book was sort of interesting, but I lost interest as the book went on. Until the climax occurred. But then the end was so predictable.

I hate Anna's mother. Anna spends the entire book saying how much her mother doesn't care about her, or trust her, or doesn't like her, but then in the end... what!? Maybe this is a 1920's thing that I just don't understand. But if you think someone doesn't like you THAT MUCH, I would distance myself from that person. Or at least, NOT put up with their crap all of the time.

And the romance. What?! I feel like the author did a great job of putting together Anna and the secondary interest, but then the author sort of shoved Anna and the primary love interest together. It seemed forced. If I hadn't seen through the secondary love interest's facade from the time he is introduced, I might have been on his side. But the romance just kind of flopped, for me.

And I'm still confused about the whole Houdini-is-your-father angle. Who cares?! What does that have to do with anything?! That didn't seem to be a major plot point, and yet, it's in the summary, and it's mentioned throughout the book. And people freak out when they hear that Anna is (supposedly) Houdini's daughter.

Again. Who cares?! Why does that matter?! Does that make a difference in Anna's life? Is that where she got her medium ability? And do we ever get a proper explanation? No. Anna meets Houdini, Anna's mother is mad, Houdini remembers Anna's mother, but no one actually says anything about the truth of the matter, and why it is such a big deal. UGH.

Basically, I got bored after a while, but the plot was still interesting. The romance was blah, and the end was predictable.

No. I know that this is a big Harper title, and many people were excited to read this one. But I still don't really recommend it. There are so many books that I need to get through (this being one of them), and I'm glad I was given the opportunity to read this one, but I wish I could have liked this one more.

3 stars. Not the most impressive debut, in my opinion.