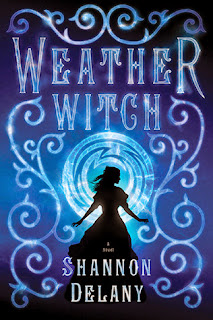 In a vastly different and darker Philadelphia of 1844, steam power has been repressed, war threatens from deep, dark waters, and one young lady of high social standing is expecting a surprise at her seventeenth birthday party–but certainly not the one she gets!

Jordan Astraea, who has lived out all of her life in Philadelphia’s most exclusive neighborhood, is preparing to celebrate her birthday with friends, family and all the extravagance they might muster. The young man who is most often her dashing companion, Rowen Burchette, has told her a surprise awaits her and her best friend, Catrina Hollindale, wouldn’t miss this night for all the world!

But storm clouds are gathering and threatening to do far more than dampen her party plans because someone in the Astraea household has committed the greatest of social sins by Harboring a Weather Witch.

I liked the IDEA of this book. You all know I'm a sucker for anything historical fiction - which is one of the biggest reasons why I requested this book. But I was sorely disappointed by this novel. It didn't even feel historic. Read on.

I don't even know where to start with this novel. I barely finished this novel - it took all of my willpower to convince myself that I was not (and am not) in the habit of not finishing books. I like to finish what I start, and leave nothing behind, so to speak.

There were some key elements of the book that I could not stand. The FIVE different plots, which, by the way, NEVER crossed all at one time in the book. The lack of characterization in any or all of the characters was annoying, as well as the fact that I disliked basically all of the characters. Delany never fully explained the terms "Conductor", a "Maker", or even a "Weather Witch" - all huge parts of the book. And I'm not one hundred percent sure why this book is classified as steampunk, because it did NOT feel like a steampunk book, or have most of the steampunk elements.

I'll start with the five plots. One plot surrounds our protagonist, Jordan, and what happens to here when she is taken away. Another plot surrounds Rowen, her best friend (and the boy she likes), and what he does to find her. Another plot surrounds Bran, the Maker of the Weather Witches. Another surrounds Chloe, a maid in Jordan's household. The final plot (I hope I'm not missing any) surrounds Marion, a man who used to be under the care of Chloe, before she allegedly killed him and as family (not true).

I thought this book was going to follow Jordan and ONLY Jordan. This book is third person, but I didn't expect there to be five plots in this book. Jordan's plot was the primary plot, up until her birthday party. After that, the book splits into five different perspectives (still third person). It's confusing!

Jordan is going to Holgate, where the Maker (Bran) is. Bran is Making Weather Witches, and dealing with the appearance of a daughter he never knew he had. Rowen is trying to fend Catrina (Jordan's scheming friend), and find Jordan. Chloe is falsely charged for murdering the family she used to work for (before she started working for Jordan's family). Marion finds out about Chloe's pending death, and wants to help her, because he knows she is innocent.

I'm sorry, but that's too much. None of it makes sense, and none of it has anything to do with the other plots. One plot might tie into another plot, but all five plots make no sense in this book. And here's the thing: THEY NEVER MEET. All five plots never come together at the end of the book. Usually when an author has so much going on, all of it meets at the end of the book or something.

So here I am, wondering what Marion's plot and Chloe's plot have anything to do with Jordan or Bran or Rowen. And why do I care about Bran and his daughter? It's great to see another side of Bran, but the whole time I was reading Bran's point-of-view, I was wondering, is this still the same story? Is anything going to happen yet?

Basically, the sheer number of plots and how they never intersect just made me mad. I got confused more than once with this book, and for me, that's not easy, for me to get confused. You KNOW the author has made a tangled web of crazy confusion when I can't follow the direction of the book.

Bran is the only character that I believe experiences any growth of character whatsoever. We see a lot of his point-of-view, and his slow change brought on by the appearance of his precious little daughter. I felt bad for Bran, because he has an awful job as the Maker, and now he has a daughter. But then I didn't feel bad for him, because he continued to Make Weather Witches.

I think that the number of plots made the the development of characterization in this book poor. Had there been less plots, each character that got a plot could have grown and developed more. But Jordan, Rowen, Marion, and Chloe did NOT experience any progression in their character development, in my opinion, Bran is the only one that changes, and in the very end, he doesn't change at all.

And someone please please PLEASE explain to me what a Conductor, Maker, and Weather Witch is. And why Delany felt the need to capitalize like, every single word. Well, not every word. But she capitalized words a lot. Delany never gives an actual explanation as to what a Conductor, Maker, and Weather Witch really are. Of course, I can infer, but as I tried to explain what they were to a friend, I found that I could not explain the terms well. That is BAD. If the author cannot explain what key terms in the world of the book are, then how are readers supposed to understand the book? Especially when you add on FIVE confusing plots and zero character development.

I don't see how this book is steampunk. It felt like a paranormal read to me. The steampunk part, with machines and whatnot, does not come into play until the very end, when Bran and other characters are on an airship. That's really the only element of steampunk that I saw.

And also, I found the "historical" part of this book not believable. This book could have been set in any time period, modern or historical, for all I know. The speech was not that authentic. In the beginning, I got more of a feel for the historic elements of the book, because of the description of Jordan and Catrina's gowns. But as the book progressed, I had no idea what historical period this book was in - because the world-building kind of dropped off.

Can I mention that there is like, NO romance in this book? During the entire book, Rowen rejects the idea of being in love with Jordan. Jordan realizes that she likes him. Before she is taken away, at her party, Rowen is going all out to impress her. But nothing romantic happens, and this book is a flop when it comes to the romance. If you were going to read this book for the romance alone, don't. There basically is no romance.

Also, this book was SO BORING. Did I already mention that I barely finished this book? Talk about forcing oneself. On the day I was reading it, I told myself I wasn't allowed to eat lunch until I finished this book. I could have cared less about any of the characters. This book was so dry and so boring that I hoped all of the characters would die or get wounded or do SOMETHING interesting, or anything at all.

This is my first Delany novel. So, I'm not familiar with her writing style. But oh my gosh, the writing style just lent itself to my boredom and confusion. Talk about vague and evasive? Delany explained NOTHING, wrote nothing specific, classified nothing.

I'm finished. I can't think about this book anymore. A total disappoint, especially for a historical fiction lover. I mean no disrespect towards the author of the publisher or the team that made this novel what it is today.

No, oh my gosh, no. I totally regret reading this book. It was a waste of my time, and honestly, a waste of am advanced reader copy sent to me by the publisher. I feel so bad that I didn't like this book, and even worse, because I requested it.

1 star. I would rate it lower, but I can't. Hopefully my experiences with St. Martin's Griffin will get better! Because this book was so not my cup of tea.