Review: All Our Pretty Songs by Sarah McCarry 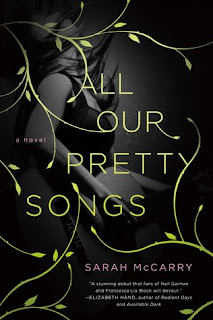 Literally, nothing. I'm sorry, I don't say this a lot, but this book appealed to me in absolutely NO WAY. Just the cover, I suppose. And the glowing synopsis. Gosh. I really, really wanted to like this book, but it totally fell flat for me.

There isn't much to this book. It's extremely short (something like 240 pages, which seems even shorter on a Kindle), and it's not what I would call dense. I'd seen a few things about this book before reading the book - that the author has a beautiful writing style, beautiful prose, a really beautiful way with words. Also, the synopsis leads us to believe that there is some powerful romance, an amazing friendship, and some mythical aspect to the novel. Sounds great, right?

Well. I'll start with the writing style. I really don't see what's so beautiful and amazing and gripping about it. I found the writing style and the narration boring and repetitive and not at all engaging. I was expecting something fabulous, something dynamic that would sweep me off my feet - and instead, I got flat, boring, lifeless narration, brought on by a not-so-awesome writing style.

Then there's the fact that this book is really short, and not that dense, and not a lot happens in this book. Literally, all that happens is the narrator describes her life with her best friend, then Jack appears, the narrator falls in love with Jack, but then Aurora (the best friend) does too, and then Jack and and Aurora disappear, and the narrator feels the need to save them.

TRUST ME when I saw that my cute summary above is more interesting than the entire book. NOTHING HAPPENS. The first part of the book WITHOUT Jack is the narrator describing how not-hot she is, and how gorgeous and perfect Aurora is. She describes how Aurora barely remembers her dad, and how she (the narrator) doesn't know her dad. Then Jack comes along, and sweeps the narrator off her feet.

That really irritates me - that Jack appears and the narrator and him just fall in love. It's total insta-love, insta-lust, whatever. There is no powerful love story in this book. I don't see or feel any all-encompassing pull between Jack and the narrator, that makes them soul mates, or something. It's complete insta-love, with a giant dose of lust. Seriously. They cannot keep their hands off each other, and all the narrator can think about is Jack, so much that she can't see straight.

So much that she doesn't realize when her best friend falls in love (or lust) with Jack as well. Assuming I understood that correctly from the story. There is a good chance that I didn't understand the entire story. I originally thought that Aurora and the narrator had the same dad - which would make the constant "close like sisters" references make sense - but I never got an explanation on that (surprise!).

I kind of hated the narrator throughout the entire story. She acts like a tough girl - she even thinks she's tough - but she bows to whatever Aurora wants. She runs off with Jack at every chance. She blindly tries to get Aurora and Jack from whatever hell they put themselves in (I seriously mean hell - that's the mythological part). She constantly tells Aurora that no one means more to her than Aurora, but when Jack comes along, we know that's not true. Everything is Aurora, Aurora, Aurora, and Jack, Jack, Jack. I expected some sort of threesome to happen at some point in the book - in which I would have STOPPED, and clocked in my first DNF. I don't know about your sexual preferences, but threesomes are NOT for me.

So, there is a love triangle, sort of. And I hate all three people in the love triangle. You know it's bad when you disliked (hate) all of the main characters in the book. The only character that I could stomach was the narrator's friend who saves her at the end (and I cannot remember his name, for crying out loud!).

I touched on this, but the plot is ridiculous. It feels like NOTHING happens, and then at the last couple of percents, the narrator goes on some life-changing quest to get Aurora and Jack, and that all in itself is so confusing and pointless and UGH! Can the author at least TRY to explain ANYTHING?! I don't understand  the "mythology" part of the book. I'm putting it in quotes because I don't even know if it's mythology, or the narrator is doing drugs or drinking alcohol, or the narrator is off her rocker.

No characterization (the narrator does not grow up AT ALL), no plot, no explanation, crap romance... how did I even finish this book?! Thank goodness it was so short - because I remember getting violently angry on so many occasions while reading this book. Good thing I love my Kindle.

I think that the people who say the author's writing is beautiful must have a better understanding of how to muddle through confusion nonsense nothings that make absolutely NO SENSE. It's rare that a book confuses me. It's rare that an author twists a story that I can't figure out. It's also BAD when I meet a story that I can't understand, because I am not stupid, and yet, I cannot make head or tail of this book.

I'm done. I apologize to the author, the publishing house, and the team of people who worked hard to get this book to where it is. But to me? This book is absolutely awful and a complete waste of my time. (and we all know how many books are out there...)

No. Nonononononono. Do NOT make the mistake of thinking that there is a pretty cover, a wonderful romance, and a mysterious story waiting for beneath that deceptive cover. Like I did, unfortunately. I had really high hopes for this book, and it ended up being an utter disappointment.

1 star. Trust me when I say that I would have given it 0 stars, had I the chance.