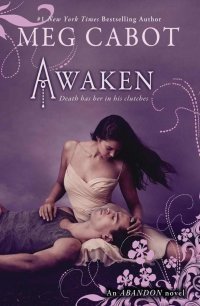 Death has her in his clutches. She doesn't want him to let go.

If the balance between life and death isn't fixed, both the Underworld and Pierce’s home back on earth will be wiped away. But there’s only one way to restore order. Someone has to die.

Oh, readers! You have no idea how happy I am that I enjoyed this book! I sort of liked the first book, Abandon (3 stars), but really did not like the second book, Underworld (2 stars). So, I was a bit undecided as to whether or not I really wanted to read Awaken, because after Underworld, I was NOT happy. However, I am so glad I saw this book on NetGalley and decided to download it. In my opinion, this book is a vast improvement in comparison to the other two books of the series.

For one, I liked Pierce a lot more than I did in Underworld. I didn't have much of a problem with her in Abandon. But in Underworld, I found her whiny and controlling and manipulative. She basically forced John to string her along, or to do things he didn't want to do (like at the end, with Alex). In Awaken, John isn't present for about the first 30% of the novel. So Pierce can't be as manipulative.

In fact, while John isn't there, Pierce takes charge. She doesn't sit around and wait for him (like he told her). She is dead set on saving the Underworld, saving Isla Huesos, and getting John. While I often found her stubborn attitude annoying in the previous books, I thought that in this book, she seemed more focused, and more sure of herself.

So basically, John revived a human soul, and everything is imbalanced. John disappears, leaving Pierce to deal with the mess down in the Underworld, and at Isla Huesos. Pierce goes back to Isla Huesos (in the beginning of Awaken, she's in the Underworld), and with the help of friends, attempts to save the world.

The plot of this book is AMAZING. I feel like more occurs in this book than the other two books combined. The first book deals more with discovering John and Pierce's past before they meet at Isla Huesos. The second book... I don't even know what the second book was. This book had action happening left and right. And good, interesting, fun action! My favorite scene was definitely the one at Luke's party. A certain someone comes back in that scene.

The ending is kick-butt awesome. I am so happy with the way things end. Everything is wrapped up - but whether in a pretty box or not, I'll let you find out. Some things I never saw coming, and other things, I knew would happen. But all in all, Cabot definitely delivers with this book, something that I waited the entire series to see. I'm glad I stuck with this series!

I found the beginning of the book extremely slow. By beginning, I mean the first 10% (or thereabout). Basically, it's Pierce giving water to the dead souls waiting for the boat to take them to their destination. She talks to these three people the entire time, and it's really boring. What kicks the book into gear is John disappearing. Everything before that is kind of yawn.

And then when Pierce decides that she has to go back to Isla Huesos to fix everything - that entire scene was long and drawn out. I was reading that and wondering, is she ever going to actually leave the Underworld? Cabot could have shortened that by a lot.

Other than that, I think this book was pretty great! I'm happy with the end of this series.

I would! If you have read the first two books, or just the first one, I would highly encourage you to read the entire series! And if you were wondering about this series, I think you should read the books! The third one is the best and my favorite, so that's something to look forward to reading. And now the entire series is out! So you can read all three without waiting.

4 stars. You know that sad feeling you get when a series ends? Well, I didn't get that feeling when I finished this book. The ending just felt so perfect and so right and I very happy with this book and the series.