Welcome to the Program 13 blog tour! Today, I have an guest post to share with you from the wonderful author, Nicole Sobon, and a giveaway! Enjoy!

Read my review of Program 13 HERE.

Choosing Names For Your Characters
by Nicole Sobon

When it comes to choosing names for my books, I try to really get a feel for the character first: appearance, personality, background, and then I try to find a name that truly fits them.

For Emile, I had this image of this robotic-like girl in my mind long before I had even started writing Program 13. Given how different the character was, and her past, I wanted a name that would standout, and Emile worked. I had been playing around with different variations of Emily until I ended up with Emile (yes, like the actor Emile Hirsch). Oddly enough, I think choosing her name was a lot easier for me than any of the others.

There have been a few instances – such as with Ben, a character you’ll meet in Collide – where I had a character, and I had a named picked out for them, and I had gotten far into the story, but due to certain reasons, I had to change it. Ben’s original name was Cole, but given how common Cole is in YA/NA stories, I figured it would be best to change it before it was published, so I asked my readers to help me rename him, and from there, I picked a name that I felt truly fit him.

Character names also vary depending on the genre I’m writing. If I’m writing a sci-fi story, the names may be a bit strange, depending on the character(s), but when it comes to contemporary stories, I definitely try to keep the names simple and make sure they reflect on the character. For instance, I have a dark NA contemporary novel that I’m working on, and the names are simple and realistic compared to the YA space story I’ve been working on for a year. The setting and genre really do determine how I name my characters in the end.

Nicole Sobon is the author of the Emile Reed Chronicles, Capture, No Place Like Home, and various short stories. 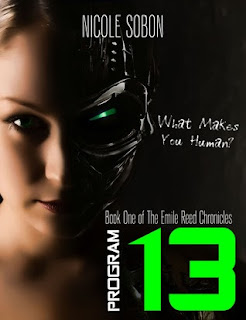 17-year-old Emile Reed, may have died, but she isn't dead. Her body now belongs to Program Thirteen, where her every thought, every movement, is controlled. Until Emile begins to find her way back inside of Thirteen's core, where she manages to fend off Thirteen’s programming to reclaim the life that she lost. But Charles McVeigh, the owner of Vesta Corp, isn’t willing to let Thirteen go. And he will stop at nothing to reclaim control of Thirteen's programming. Because without her, McVeigh has nothing.

What makes you human?

- (1) ebook copy of Program 13 (ePub, mobi, or PDF only) - open internationally
- (1) Program 13 bookmark - open to US/CA residents ONLY.
- The giveaway begins on July 15th, and ends on August 7th at 11:59 EST.
- PLEASE READ THE TERMS AND CONDITIONS IN THE RAFFLECOPTER BEFORE ENTERING THE GIVEAWAY