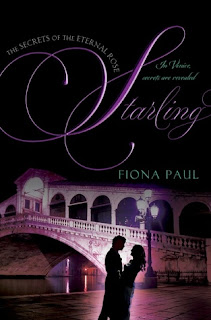 SPOILER FREE REVIEW! Unless you haven't read Venom. But if you have read both Venom and Belladonna, there are zero spoilers in this review!

Also, I feel like I'm not going to do this book justice with my review.

I don't even know where to start with this book. For me, this series has come a long way. Way back when, I read Venom, and didn't really like, a little more than a month ago, I read Belladonna, and enjoyed it! I was so happy to see several key changes in the series. Three weeks ago, I was sent this novel as a "delta" reader (I rather like that title!), and here we are. Conclusion novels are always difficult for me to review, because I hate seeing a series end, especially the ones that I enjoyed. I also feel the need to compare and review the entire series, in the review for the last book. Which doesn't make much sense. But anyway. I may have disliked Venom, but as I have completed the series, I have come to realize that this YA historical fiction series is one of my favorites.

I have a feeling I'm going to ramble in this review, so I'm going to narrow down what I liked into specific sections. I am so happy to finally *really* understand everything behind the Secrets of the Eternal Rose. Finding this book and clearing Luca's name seems to be the primary objective in the story. The plot might seem straightforward, but I love the twists and turns that Ms. Paul includes that make the story that much more interesting. While I didn't see character development in Venom, I could clearly see the depth of some characters' growth by the end of this book. And the romance - everyone wants to know how it ends. It ends... well. As does the entire series.

I am so happy that the Secrets of the Eternal Rose and the Book and that whole mystery is puzzled out! The series is set around finding the book, so obviously, a resolution of some sort would have been in order, but I'm just really happy that after being disappointed with its lack of mention in Venom, that everything about the Order is resolved in a way.

The plot was probably anything but straightforward. The book picks up where Belladonna left off - with Luca and Cass on the run. They go to Cass's villa, and after that, things get complicated. I'm not going to spoil anything, Ms. Paul kept the pace of the book moving, page after page. It seemed like Cass did not stay in one place for very long. Finding the Book, sneaking into rooms, escaping from places... there was no shortage of action and conflict in this novel. I love this aspect of the book, because this is a huge change from Venom, and (sort of) Belladonna. I found Venom very slow in pace, and Belladonna faster, but Starling kept going. You couldn't stop and absorb for a second!

NOT that that's a bad thing at all! I was pleased by how many situations and conflicts Ms. Paul put in Starling. It's not a confusing book (I promise!), nor is it hard to keep track and remember what happened in the past. That is another excellent thing I found - Ms. Paul has the ability to successfully bring readers back the overall story and the immediate story, without confusing readers or making readers feel like they've forgotten everything and must re-read the previous books.

Not that re-reading the previous books is a bad idea ;)

This is sort of a comparison from the beginning of the series (Venom) to the end of the series (Starling), but I'm very pleased by the evidence of character development in Cass. I feel like the rest of the characters stayed pretty static throughout the series, but Cass definitely changed - and for the better. I complained in my review of Venom how I thought that Cass was an ehhh character, with no development from the beginning of Venom to the end. But as I have finished the series, I can see how she has changed. While I still think her entire being is anachronistic, I love how Cass stands for herself and fights for what she wants, rather than follow someone and wait for things to come to her.

Ms. Paul puts Cass in very difficult and tricky situations, and I like how Cass deals with being placed in those situations. I finally really like Cass in this book, because I think she fights for herself, for reasons that she wants, and not for what she thinks others would want from her. Also, the courtesan thing? SO amusing! I admire Cass's gall to be around the courtesans. And they're pretty cool! The courtesans play a huge and important role in Starling. You'll see what I mean, and I hope you agree with me!

Okay... I've reached the point I'm sure most people care about the most: the romance. While I will NOT insinuate which young man is the lucky one, I will say that regardless of which one you like, I think readers will love the ending of the Starling, in terms of the romance. Forget "Team Luca" and "Team Falco" for a second. Think about Cass, her personality, who she is, what she stands for, and what she knows that SHE wants and needs. The young man she chose... well, she chose him for him, and for her. I know that probably doesn't make much sense, but if you're an astute reader, you'll know without having to know which young man she chooses.

Of course, I know some readers are going to disappointed, because Cass can't have it both ways! But again - regardless of what "team" you are on, I think you will be satisfied with the ending, in terms of romance. AND in terms of everything else!

So, I got the opportunity to read this book in early July as a "delta reader", to read through for historical inaccuracies (anachronisms) and such. One of the things that really bugged me in Venom was the presence of obvious anachronisms in the book. BUT, I have to say, I've read Starling several times now, and I am really happy with Ms. Paul's depth of research and the amount of time and effort she put into painstakingly making sure that she caught as many anachronisms as possible. I know I'm a crazy historical fiction fan and reader, and I look sometimes too deeply into stories, but I am proud of Ms. Paul because I barely found any at all (no obvious ones whatsoever!) in Starling.

And hey - one last point. THE COVER IS PURPLE! Purple is my favorite color! So, um, well, yeah. I'm glad they made this one purple, because it makes it extra special, since it's my favorite of the series.

If you've reached this point and you're reading this sentence and you're STILL not convinced that you should pick up this book and/or series, then I shall say: GO READ IT ANYWAY! Buy the books, borrow them from the library, borrow them from a friend... just go read them.

I have nothing to say in this section. I'm not saying this book is perfect, but... no comments on dislikes!

YES! And people - this is coming from the world's pickiest reader that didn't exactly enjoy the first book. I did like the second book though. If you were like me - you didn't enjoy Venom, keep reading! It gets better. And then even better. Just trust me!

5 stars - because 4 stars just wasn't enough. I am honored to have been given the opportunity to read this book so early! Thank you, Ms. Paul!