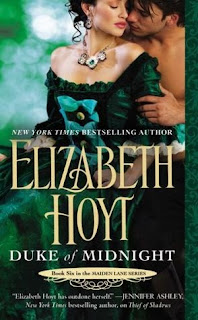 Twenty years ago Maximus Batten witnessed the brutal murders of his parents. Now the autocratic Duke of Wakefield, he spends his days ruling Parliament. But by night, disguised as the Ghost of St. Giles, he prowls the grim alleys of St. Giles, ever on the hunt for the murderer. One night he finds a fiery woman who meets him toe-to-toe-and won't back down . . .

Artemis Greaves toils as a lady's companion, but hiding beneath the plain brown serge of her dress is the heart of a huntress. When the Ghost of St. Giles rescues her from footpads, she recognizes a kindred spirit-and is intrigued. She's even more intrigued when she realizes who exactly the notorious Ghost is by day . . .

Artemis makes a bold move: she demands that Maximus use his influence to free her imprisoned brother-or she will expose him as the Ghost. But blackmailing a powerful duke isn't without risks. Now that she has the tiger by the tail, can she withstand his ire-or the temptation of his embrace?

You know that feeling when you fly through a much-anticipated book and you get to the ending and you just collapse and close your eyes and sigh because the book was THAT GOOD? Yeah... that's how I felt after reading and finishing Duke of Midnight. It didn't just have a great ending, or an exciting climax, or an endearing romance - this book had it ALL, from start to finish.

I'm going to start with the plot. Artemis, lady's companion to her cousin (distant relation) Lady Penelope, is treated almost like a servant, despite being of noble background. As a lady's companion, she is always with Penelope, and she is regarded as the poor relation that must depend on the kindness of her relatives to support her. Also, she has a "mad" twin brother, Apollo, which makes her situation even worse, as people think that madness runs in the family.

Apollo is accused of killing several people and thrown in Bedlam. Everyone believes that he is mad, except Artemis. She wants him out of Bedlam. An opportunity is given to her in the form of  Maximus Batten,the Duke of Wakefield. She discovers that he is the Ghost of St. Giles, and all but blackmails him with her knowledge.

Can you see how the plot of this book is exciting? Blackmail AND romance AND murder AND betrayal! Oh, I probably didn't mention betrayal. The Duke courts Lady Penelope for a good portion of the book, and intends to marry her. So, in a way, Artemis betrays Penelope by falling in love with the Duke (and that's not a spoiler... I don't think).

So the plot itself was AMAZING. I loved how the plot wasn't typical of a historical romance novel. I mean, the poor relation threatening a duke?! I found this angle intriguing.

Artemis is such a strong and independent character - so different from Lady Penelope and the typical female figure of this time. She is named for the goddess of the hunt, and this reference appears quite often in this book. Artemis herself is a hunter, seeking to free her brother, and hunting her prey (Maximus). I loved how she went after Maximus, and not necessarily the other way around.

And Maximus. Oh, Maximus. I didn't think I would, you know, LIKE him, after his cold and iron-like appearances in the previous Maiden Lane books. But, I found myself completely sympathizing with him and really liking him and wanting to give him a hug throughout the book! It's hard not to fall for him - beneath the cold exterior is a broken man.

Onto the romance. The romance was... heartbreaking and beautiful and ALIVE. I honestly don't know how to describe it better than that. The romance wasn't soft and flowery and sweet. It was brutal and passionate, powerful and unforgiving. Maximus and Artemis are meant for each other in so many ways, but it's their passion, so alike, that make them magnetic. Their relationship progresses in the strangest manner, what with Maximus formally courting Penelope, and Artemis being Penelope's lady's companion, but it developed seamlessly and perfectly.

As always, Ms. Hoyt does an excellent job of writing the historical part of this book - meaning, she does her research well, and knows the history behind this time period. I am always impressed by how well Ms. Hoyt writes this historical society, because believe me when I say, I am unconsciously watching for anachronisms.

The ending is PERFECT. Yes, it's a happy ending that you could probably see from the beginning, but the way that everything else happens makes the ending so much more real and deserved. I love the journey on which Ms. Hoyt takes us readers - and I hope you will too!

I can honestly say that there wasn't much, if anything, that I didn't like. I dislike saying something like that, because no book is perfect. But it's been several weeks since I read this book (and re-read it, and re-read it again, and re-read it 21454756 more times... you THINK I'm exaggerating!), and I can't think of anything I really didn't like about this book.

5 stars. Whatever you do, DON'T miss this one! Read it out of the series, if you've never picked up any of the books in this series! And if you're already a fan of this series, you will not be disappointed!