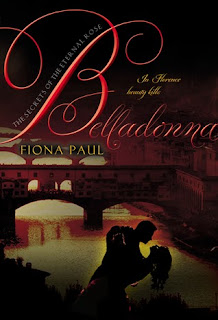 In the second in the stunning Secrets of the Eternal Rose series, Cassandra Caravello is trying to forget Falco, the wild artist who ran off with her heart, as she grows closer to her strong, steady fiancé, Luca. But Luca seems to have his own secrets. When he’s arrested by soldiers in the middle of the night, Cass’s life is once again thrown into chaos. She must save Luca, and that means finding the Book of the Eternal Rose—the only evidence that will prove he’s innocent.

So begins her journey to Florence, a city haunted by whispers of vampirism, secret soirees and clandestine meetings of the Order of the Eternal Rose. And home to Falco, who is working for the Order’s eerily stunning leader, the Belladonna herself.

Can Cass trust her heart to lead her to the truth this time? Nothing is as it seems in this seductive thriller, where the truth may be the deadliest poison of all.

You all know I didn't like Venom as much as I'd hoped. I gave it three stars - but at the time, I wasn't sure if the rating was truly representative of how I felt. I absolutely LOVE historical fiction - it's my second favorite genre - and I love history. So, it sort of hurt to be disappointed by a much anticipated historical fiction novel.

Nevertheless, I found Belladonna much more to my liking. Not only was Belladonna better in comparison to Venom, but it was just an all-around good book! I really enjoyed it! Especially, now that I've let it sit for a few days after reading it, I truly appreciate how much I liked it!

Let me start by noting the things that I liked in Belladonna that I didn't like in Venom. In my review of Venom, I said that I didn't really liked Falco, and the entire love triangle business. I still don't like Falco or the presence of the love triangle. BUT, Ms. Paul did something excellent in Belladonna that made me appreciate the love triangle and Falco's role a little more: she spun this book to have Cass less concentrated on Falco, and more concentrated on Luca. Falco is still highly present in this novel, especially in the second half of the book, and Cass's "feelings" (read my review of Venom if you want to know why I have "feelings" in quotation marks) for him are still there. But, as readers, we get to explore Cass's feelings towards Luca.

I find this necessary, because a true, powerful love triangle would not just have the strong presence of one boy (typically, the hot, lust-filled, forbidden one) and the sometime-ish presence of another boy (typically, also hot, but more thought-filled). Ms. Paul let Cass (and readers) fall for Falco in Venom (except me, apparently). In Belladonna, we get to at least understand Luca's role in Cass's life.

And just for the record - all of that wasn't really a spoiler, because Luca isn't physically present for the majority of the book. That's another brilliant thing that Ms. Paul did: while Cass's relationship with Falco is very physical, her relationship with Luca is more intellectual or emotional (and less physical, since they don't interact much). Brilliant!

Like I said in my review of Venom, I am on Luca's side. I still am. I still don't like Falco. I'm not insinuating anything - I'll leave it up to you to figure out the end of this book, in terms of the romance!

Another thing I mentioned in my review of Venom was the lack of information on the Book of the Eternal Rose. In Belladonna, we get a lot more information about this, and the Order of the Eternal Rose. We get to see the purpose of it, and how it changes the entire series! I was particularly pleased to see this change - because I am disappointed when books based on a solid plot idea or completely overrun by the romance.

The plot - I already said that I am happy to see that we get a bit of an explanation of the Order of the Eternal Rose. But one of the things I liked most about this book was the faster pace. The first... third of the book was a bit slow - but for good reason. But the rest of the book was page-turning! While I thought Venom dragged a bit, I finished Belladonna quickly. The faster, more interesting plot made this book much more enjoyable than Venom. And let me tell you, especially towards the end, things get INTERESTING. In a dark and creepy way. YEAH. Get ready to meet Belladonna, the person! That was... intriguing.

And general things I found that I liked about Belladonna: I didn't find Cass as annoying as I did in Venom. She seemed more grounded and purposeful in Belladonna, and a little more intelligent in her decisions. She's still reckless and irrational sometimes, but I found that I understood her actions better, with her motives.

There is no crazy cliffhanger at the end - no deaths or disappearances or things that make the reader scream, "THAT'S IT?!". Of course, there is a final book coming in March. But I'm just saying that by itself, this book wrapped up pretty well, in terms of the plot. PLOT.

Despite my immense relief of liking the second book even after I didn't like the first book, there are still some things that I didn't like. I've already said that I didn't like Falco. I just find him annoying. Especially in this book. I just don't see his appeal! I'll leave him to you Team Falco aficionados.

There is still the presence of anachronisms in this book. The speech - so many contractions! I am so sure that people in Renaissance Italy didn't have contractions in their speech, like we do today.

Another thing that bugged me was when the author would throw in a phrase or word in Italian. Technically, the characters are speaking Italian, because they are in Renaissance Italy. Obviously, we read it in English. So, it doesn't really make sense to add the Italian phrases, because it's redundant.

On the other hand, I can see why the author did it. It adds authenticity to the setting, and culture to the characters. So, I'm not sure if I like this feature or not. It bugs me. But probably ONLY me. This isn't really an anachronism, but it's part of the speech of the time. Anyway.

Another anachronism that I found was something that I had to look up to be sure. In Venom AND in Belladonna, readers are aware that Cass has the ability to read and write. She has a journal, she writes letters and messages to Falco, she reads letters from Luca. But, I am certain that MOST women - especially genteel women - did not know how to read or write during this time period. Men handled all affairs dealing with reading and writing. If a women needed a message delivered, she would dictate her message to a footman or messenger. Women of noble birth usually grew up without the simplest and most necessary skills; instead, they learned to sew and knit and play instruments and do other artistic things that gentlewomen did.

Of course, this series is set during the Renaissance, and some high-class women (like, REALLY high-class - duke's wives, and whatnot) learned to read (and sometimes, write) during this time period. But the Renaissance wasn't the time where most women took it upon themselves to learn to read and write.

I had to research that, and most of the reputable sources I found were in agreement about this area of women's lives. However, if you're reading this review and you find an authentic source of information that negates my argument, please bring it to my attention! I don't want to draw negative light to something that is actually correct.

I know that all looks like a ton of "not liked" things, but I promise, they are little things that probably ONLY I would notice and not like. It's not that many!

I would definitely recommend it! I would tell you to read Venom just so you can read Belladonna... but many people were less critical of Venom than me. So, enjoy both, and join me in the wait for Starling!

4 stars. This book was much better than the first book - and I mean that in the best of ways! I'm pleased with this book and the direction that this series is going.