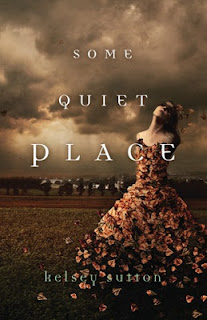 Elizabeth Caldwell doesn't feel emotions . . . she sees them. Longing, Shame, and Courage materialize around her classmates. Fury and Resentment appear in her dysfunctional home. They've all given up on Elizabeth because she doesn't succumb to their touch. All, that is, save one—Fear. He’s intrigued by her, as desperate to understand the accident that changed Elizabeth’s life as she is herself.

I don't even know where to begin with how I feel about this book. I expected to like this book (I even pre-ordered it without reading it a couple of months ago!), but I didn't expect to like it so much! It's safe to say that this book blew me away in the best way possible.

So, Elizabeth can't feel anything, but she can physically see Emotions, as people. They are immortal beings who show up when someone starts to feel a certain way. For example, if a person felt embarrassment, then Embarrassment would show up around the person.

Why can't Elizabeth feel anything? What makes her so different? It takes the entire book to understand why. Fear is the only Emotion that is interested in the "why", enough to talk to her and be around her. The other Emotions have no use being around her, because she doesn't feel anything, so she doesn't need them.

It was really heart-breaking to go through this book, following Elizabeth and her emotionless state. As a reader, I just knew that there had to be a reason why she couldn't, but I also could tell that she truly could feel emotions. Sutton leads readers to this realization, and as we get closer to the end of the book, more and more starts to make sense.

Nevertheless, the plot of this book was never dull or boring. I wanted to know what would happen to Elizabeth at school, or with her father, or with her mother, or with Fear. I was completely sucked into the mystery of her emotionless being.

I was also completely sucked into Elizabeth and Fear's relationship. Not a lot happens between them, but when things happen, they happen. As we learn the truth about Elizabeth's condition, things between her and Fear become even more heartbreaking, but they start to make sense.

The scenes with Fear are my favorite. Whether he is acting jealous over Joshua, or he is accompanying Elizabeth to a party, or he is saving her from her father, Fear is there for Elizabeth. Any scene with Fear made my heart beat a little faster. In his own way, he is swoony and perfectly male and all-around a wonderful Emotion, despite his purpose.

Elizabeth's predicament at home made this novel all the more three-dimensional. Her father is a drunk who tends to yell at her and take his rage out on her because she isn't the perfect child like her brother. Her mother basically hates her, and wants to run away from the house as fast as possible. And Elizabeth's brother - he might be the worst. He ISN'T the perfect child his father thinks he is. He avoids Elizabeth, and wants to take the easy way out of everything. He dropped out of school and wants to leave the farm.

I'm glad this book ended the way it did, with Elizabeth choosing what she did. She didn't deserve how her family treated her. That being said, the ending is probably the happiest part of the book! I was pleased by the ending, because the tone of the entire book is very melancholy (not a bad thing!) - until the end.

Okay, there is a sort-of love triangle, but in my opinion, it's not love triangle at all. Elizabeth can't feel love. So whatever relationship (friendship) she had with Joshua wasn't real. Fear is the primary interest, and I said there was a happy ending. So... there.

There really wasn't much I didn't like. Maybe, there could have been more physically swoony scenes with Fear.

YES! Oh my gosh, yes! This one is going on my end-of-the-year favorites list for sure!

5 stars. I'm so glad I got the chance to read this one! And I'm even more glad that I took the chance and pre-ordered it without reading it first - because it's a really good book.