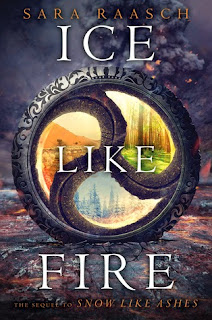 It’s been three months since the Winterians were freed and Spring’s king, Angra, disappeared—thanks largely to the help of Cordell.

Meira just wants her people to be safe. When Cordellan debt forces the Winterians to dig their mines for payment, they unearth something powerful and possibly dangerous: Primoria’s lost chasm of magic. Theron sees this find as an opportunity—with this much magic, the world can finally stand against threats like Angra. But Meira fears the danger the chasm poses—the last time the world had access to so much magic, it spawned the Decay. So when the king of Cordell orders the two on a mission across the kingdoms of Primoria to discover the chasm’s secrets, Meira plans to use the trip to garner support to keep the chasm shut and Winter safe—even if it means clashing with Theron. But can she do so without endangering the people she loves?

Mather just wants to be free. The horrors inflicted on the Winterians hang fresh and raw in Januari—leaving Winter vulnerable to Cordell’s growing oppression. When Meira leaves to search for allies, he decides to take Winter’s security into his own hands. Can he rebuild his broken kingdom and protect them from new threats?

As the web of power and deception weaves tighter, Theron fights for magic, Mather fights for freedom—and Meira starts to wonder if she should be fighting not just for Winter, but for the world.

Ahem. Keep reading. The one thing I can think of that I liked was maybe all the times Meira realized that she was wrong or stupid. Oops?

Ahh. This review is going to be a struggle to write, I already know it. I've eaten ice cream, a pre-one-star-review treat - sustenance? I had a feeling, before I started this one, that it wouldn't go well for me. So I already had super low expectations for this book, despite liking Snow Like Ashes.

I'll try to be as brief as possible, because I don't want to accidentally spoil anything, I don't want this to be a long and boring review, and I don't want to talk about this book longer than I have to. I'll start with Meira - gosh, I hated her in this book. I don't have to like a single person (this is directed at all those people who hate it when a reader hates a female protagonist), and I did not like Meira. I think I liked her in Snow Like Ashes? But I could not stand her in this book.

Maybe it was the constant "I want to save the world" or "I am Queen" or "Winter is EVERYTHING". Those thoughts going through Meira's head were SO ANNOYING. Literally all she thought about were these things. Dang, girl, you need something cute in your life, like a puppy. Or an obsession with chocolate. Chill the f*** out. There are zero warm and fuzzy moments in this book, no times when I was like awww, Meira, or hahaha, Meira you're hilarious. Nope. This book was entirely gloom and doom, and a ridiculous set of gloom and doom.

Meira makes a lot of stupid, non-queenly decisions, and she realizes it as she goes. I LIVED for those scenes when she realized how dumb she had been, after every "thing" that she did badly. Poor girl lost brain cells between Snow Like Ashes and this book. We're supposed to see character growth in her, from book one to this book, from the beginning of this book to the end. But in my opinion, Meira did is still immature and irrational, a stubborn sixteen-year-old who is totally unfit to rule Winter.

I hate Meira. Moving on. This book is so over the top. The whole "save the world" thing is so old, so unoriginal, so cliche. The author doesn't even dress it up as anything special or unique. This book is so cliche and unoriginal! The tone is supposed to be ominous (or something?), but it came off as childish, obnoxious, and totally over the top. So exaggerated. This is just a feeling that I got, not something I can specifically quantify.

Another thing - this book does not do a good job of doing the little recap thing in the beginning. The author does not slowly disseminate information that occurred in Snow Like Ashes, like many authors do in sequels. I completely forgot just about everything that occurred in book one, so when this book mentioned things like Theron imprisoned in Abril, I was like huh? This is news to me! Although I suppose it happened in book one? I can't remember, and it's a problem because this book should have recapped important things!

Remember how I said this book is cliche and unoriginal? Okay so the plot of this book was very unoriginal - guess what we're doing in this book?! Looking for a thing that will unlock power (this is as general as it gets). Surprise! Isn't that what every high fantasy novel seems to like to do - look for artifacts or things of power? Yay! UGH.

Not to mention that this book is nearly five hundred pages and could easily be boiled down to about FIFTY. You literally need the last few chapters, you could skip the whole book. I'm so serious. Maybe one or two characters are introduced that are important, but the whole book is so pointless, and boring. It comes down to the last fifty pages or so, but the thing is, the rest of the book is so unnecessary. It felt like nothing was happening - which is why it was boring.

Let's talk romance, so I can exit with a flourish. Literally I hate everything about the romance of this book. Theron and Meira are traveling together, and for a while, it seems like things are going well between them. By the end, I wanted to throw this book, for all the reasons I mentioned above, and then the romance too. Raasch f***s up the romance, reintroduces the love triangle, and basically flips it. Think The Wrath and the Dawn. That's as much as I can say without things getting spoiler-y. The author did awful things to Theron in general (not including the romance), and I don't think he deserved it. I'm so disappointed in this plot arc, as well as the direction of the romance.

The ending is complete s***, and I won't say more than that about it. Prepare to be tortured, whether you love or hate the book.

Mostly I hate Meira though, and once you dislike the protagonist, it's pretty much all over. I HATE Mather too - he is such a child! Why does no one act more mature in this book?! You're all kings and queen and royalty - you'd think these children would act like it? Instead they're acting like tweens. Teens in high fantasy settings are MUCH different from teens in contemporary (modern) settings. I feel like their maturity should reflect this, from the start.

I know there was more I disliked, but I'm not going to think about it anymore! Tl; dr: hot mess.

This book (and now, series) is getting one big solid NO from me. Don't start this series if you haven't already. It might turn around in book three, and I will probably read book three. But I wouldn't torture yourself until book three is published. Or maybe skip this book altogether. You could do that and be JUST FINE, trust me.

1 star. I know there are a ton of positive reviews and feedback on Goodreads for this book, and that's great! But I hope, even if you're one of those people that are totally indoctrinated, that you at least consider what I've said here. You won't quite understand until you've read this book, but just know that SOMEONE didn't like the book!