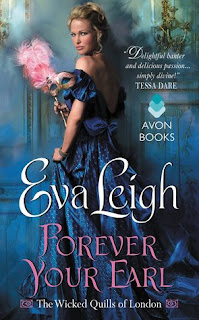 Eva Leigh makes her Avon debut with the first book in her smart and sexy Wicked Quills of London series!

Eleanor Hawke loves a good scandal. And readers of her successful gossip rag live for the exploits of her favorite subject: Daniel Balfour, the notorious Earl of Ashford. So when the earl himself marches into her office one day and invites her to experience his illicit pursuits firsthand, Eleanor is stunned. Gambling hells, phaeton races, masquerades…What more could a scandal writer want than a secret look into the life of this devilishly handsome rake?

Daniel has secrets and if The Hawk’s Eye gets wind of them, a man’s life could be at stake. And what better way to distract a gossip than by feeding her the scandal she desperately craves? But Daniel never expected the sharp mind and biting wit of the beautiful writer, and their desire for each other threatens even his best laid plans.

But when Eleanor learns the truth of his deception, Daniel will do anything to prove a romance between a commoner and an earl could really last forever.

Debut historical romance author! I personally don't come across too many of these first novels from first-time authors, so I always make a mental note when I do. Debut novels are extra special! Especially when they're really good, written like a tenth novel from the author. I enjoyed this book! Lots of witty banter, good chemistry, and likable characters!

Eleanor is a self-made woman, a writer who owns and runs her business. She writes scandals for her paper, The Hawk's Eye. When one of her illustrious subjects, Lord Ashford, comes to her directly and offers to take her about and show her his life as a rake, how can she refuse? Eleanor knows he has ulterior motives, but she knows an opportunity when she sees one. Daniel, Earl of Ashford is trying to turn The Hawk's Eye away from something specific that he is doing - looking for a fallen comrade. But in the process, this very earl and this very journalist find it impossible not to fall for each other... but can this unlikely romance survive?

My absolute favorite thing about this book is all the banter between Eleanor and Ashford! Eleanor is a writer, and a sometimes sarcastic one. In any case, she is observant and has a quick mind, so her tongue is sharp and she is unafraid to tell Daniel anything on her mind. Daniel is a master opponent, just as adept with trading barbs. They play games with each other in words like pros. It is so fun to watch! I enjoy their relationship.

Specifically, I like the romance. They meet when he storms in her office, and she takes him up on his offer to let him show her into his life as a rake. Their first night about, she has to dress as a man. This particular night takes up a huge chunk of the book, maybe 20% alone (that's a lot for one night!). After that, things take off. Daniel finds that he cannot stop thinking about his clever companion, and Eleanor cannot stop thinking about the earl who is more than a rich, powerful man.

I like Eleanor, and not just for her wit! Though her clever mind is a big part. She is inquisitive and curious, very smart and very calculating, but not in a cold way. She can sniff out situations like a mathematician solves equations! She is also candid and honest, bold and not shy at all. She isn't ashamed of what she does (the newspaper, as a woman), or who she is (a poor plebeian).

I liked Daniel too! He is a kind man, but also wicked and very rakish. He is definitely a hawt HR male protagonist, and it's no wonder Eleanor can't stop thinking about him or picturing him a certain... way. He's guilty about the friend he's looking for, and it's clear to me that he is a good, noble, selfless man that shouldn't feel so guilty!

I loved the romance! As I said before, I liked watching the banter flow between the two characters. The chemistry is very present throughout the book. I would have like to see more steamy scenes between the two (the author definitely held back, compared to what I usually expect from historical romance novels). But I liked the progression of the relationship, even if it seemed a little fast.

There was another really REALLY great thing about this book - it's a very progressive historical romance novel. At first, you might think, that's anachronistic! Eleanor is running her own business and publishing work as a woman! I think this modern aspect really helped the book, and made it unique. I love the progressiveness of the story, the feminism!

The conflict - Daniel looking for his friend - is always in the back of Daniel's mind. He goes to all these debauched places with Eleanor in search of his friend, not just the cover of taking her to see his rakish life. Will he find the friend? You'll have to read this book to find out...

The ending is satisfying on pretty much all accounts! It ends a little too perfectly, in my opinion, but I rolled with it. I wanted a little more romantic epilogue type of thing between Daniel and Eleanor, but there was an epilogue, and it did feature the two of them, so I guess I shouldn't complain too much. Hopefully the author's writing gets even better as the series goes!

Like I said above, not enough steamy scenes! At least, not enough as I would expect from a historical romance novel, especially an Avon one. There was one main one, well over halfway through the book. And then a few short or curtailed ones. Maybe I'm just a needy romance reader!

And I mentioned the ending - it was very cookie-cutter perfect! I wanted a little more clear resolution on a few things, and a nice expanded closing between Daniel and Eleanor. Of course, you can't always get what you want! This particular point isn't a huge deal.

As far as historical romance novels go, this one isn't bad at all! I really liked the witty banter and chemistry between Daniel and Eleanor. And the feminism and progressiveness of the novel! Eva Leigh is definitely an up and coming historical romance writer to watch.

4 stars. I will definitely be looking forward to reading the second novel in the series! Marwood is my favorite secondary character of this novel, so I can't wait to see him and his chosen opposing lady in action. Both are some of my favorites, such interesting characters!


***Note: I received this book from Edelweiss for free, via the Avon Addicts program. This did not in any way affect my opinion of the book or my review.***
Posted by Alyssa at 12:00 AM