Review: A Madness So Discreet by Mindy McGinnis 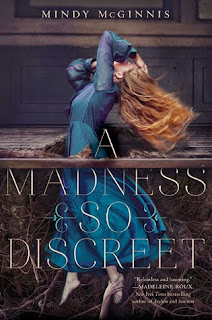 She keeps it locked away, along with her voice, trapped deep inside a brilliant mind that cannot forget horrific family secrets. Those secrets, along with the bulge in her belly, land her in a Boston insane asylum.

When her voice returns in a burst of violence, Grace is banished to the dark cellars, where her mind is discovered by a visiting doctor who dabbles in the new study of criminal psychology. With her keen eyes and sharp memory, Grace will make the perfect assistant at crime scenes. Escaping from Boston to the safety of an ethical Ohio asylum, Grace finds friendship and hope, hints of a life she should have had. But gruesome nights bring Grace and the doctor into the circle of a killer who stalks young women. Grace, continuing to operate under the cloak of madness, must hunt a murderer while she confronts the demons in her own past.

In this beautifully twisted historical thriller, Mindy McGinnis, acclaimed author of Not a Drop to Drink and In a Handful of Dust, explores the fine line between sanity and insanity, good and evil—and the madness that exists in all of us.

Of McGinnis's three books, this one would be my favorite. Yes, all three books have received three stars from me. I thought Not a Drop to Drink was okay, and I liked In a Handful of Dust slightly less, but this one was different. Strange, twisted, dark, but very refreshing in YA. I know there were certain things that I personally didn't like, but I can't fault McGinnis's talent as a writer.

Grace has been sent to an asylum by her family, who has told polite society that she is on a European vacation. Truth be told, someone raped her, and she's pregnant. She isn't the first female this man has taken advantage of. This Boston senator has a magnetic personality, as well as a good deal of power. The insane asylum is filled with truly insane people, but Grace is not one of them. When an opportunity hits, and Grace is smuggled out of the asylum, she is given a chance to work with a doctor working in criminal psychology. She and the doctor work in the dead of night, investigating murders and crime scenes. But a particularly frightening series of killings has strikes Grace in a personal way. When past and present collide, will madness win?

First thing I'd like to note is the setting. McGinnis masterfully created this historical world of the Americas. I believe it is nineteenth-century America, in Boston. I studied U.S. history enough to know the horrors of insane asylums back then (even now though...). As well as medical practices! Our doctor, Dr. Thornhollow, has some, ah, interesting methods of doctoring. But as to be expected. I LOVE how Phineas Gage is such a big influence in this book - I've studied him in Psychology classes, and have always been fascinated by him!

This book is written in third person, limited to Grace's point-of-view. After being in the asylum for so long, Grace truly believes that she is nothing, and only survives for what grows inside her. But as the story goes on, Grace finds her voice - literally and figuratively. She'd been silent too long in the asylum. It was chance that brought her out of the asylum, and she does not throw away her opportunities. She has a sharp memory and an eye for detail, making her a perfect assistant to Dr. Thornhollow, and she accompanies him to crime scenes. I like Grace, though I didn't feel a strong connection to her. Perhaps a third-person issue.

Dr. Thornhollow is an odd fellow. He is a young doctor, studying phrenology - pseudoscience. He is obsessed with the brain, and wants to analyze the brains of criminals. He is very kind to Grace, despite the fact that he pretty much ignores emotions and emotional connections to humans, and is very invested in his work. He isn't insane, yet he is driven and dedicated to his strange work.

To be honest, I didn't read the summary of this book before picking it up from Edelweiss months ago. That's some faith in the author, especially after her first two books being three-star reads. While this one was also a three-star read, I rather enjoyed it. It was hard to read at times, but once Thornhollow enters the picture, things get MUCH more readable. Other characters turn up too, and I really like those characters. Lizzie, Nell, Adelaide - especially Adelaide, she is a favorite.

So I think I was pleased with this book overall, though I could never see himself rereading it. I don't regret picking it up at all, though I struggled a bit while reading it (see below). I will probably continue reading McGinnis's books in the future!

The first, hmm, fifth of this book was very hard for me to read. For one, I didn't read the synopsis of this book, so I didn't know that Grace would not be in the insane asylum for the entire book. She gets out of there after about a fifth of the book of so. But I didn't know this (I didn't read the synopsis, just picked up the book based on the author's name alone). I almost stopped reading.

The beginning was hard for me. Grace is treated terribly, cruelly, almost like torture. Physical torture, emotional torture, mental torture. Grace is withered to nothing, physically and emotionally. She never speaks, never cries out, never fights. "No" stopped meaning anything, after, well, what got her into the asylum. I couldn't stand how Grace was treated, though I know it was all very authentic and plausible, and the author did an amazing (and chilling) job with this. But... that doesn't mean I had to enjoy it or think it was great.

So I almost DNF'd. Then Thornhollow entered the picture, and I breathed a little. The book is much easier to read, and much faster to read, once Grace gets out of the asylum. Not to say that terrible and chilling things stop happening - they keep coming. But they more manageable, easier to stomach. If that makes sense.

I personally think the big answer/solution to the crime mystery they were solving was too hastily rushed, towards the end, and the climax was too abrupt. Of course, this could very well be an Alyssa opinion, but the climax was done in the snap of fingers. You could almost miss it, if you're not careful. And then something else happens - it's not really falling action, or a denouement. I didn't really like how the ending kind of just happened, especially how conveniently it did. Emotionally, I don't really think the author tied things up, in terms of Grace's mental/emotional mindset. As well as with the culprit, and the other criminal at the very end. Something just felt like it was missing.

Also, this isn't a dislike necessarily, but there is no romance in this book. None whatsoever. Don't expect any or go looking for any.

I don't know if I would recommend this book to just ANYONE. This isn't a natural crowd-pleaser, one of those books that everyone likes. McGinnis's books attract a certain, narrow audience, so you kind of have to know if you're one of those people or not. I personally liked the book, but didn't love it, and probably wouldn't have glanced at it twice if I hadn't heard of the author. Don't read this if you're sensitive to rape, pregnancy from rape, suicide, torture, death, murder, etc.

3 stars. I know I've rated all three of McGinnis's novels with 3 stars, but I still think I'll be looking for more by McGinnis! She's a very talented writer, and I like reading her books, though I think they may not be for me. I always love seeing what she comes up with!