Review: Walk on Earth a Stranger by Rae Carson 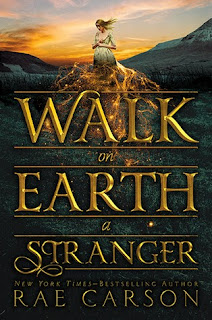 The first book in a new trilogy from acclaimed New York Times bestselling author Rae Carson. A young woman with the magical ability to sense the presence of gold must flee her home, taking her on a sweeping and dangerous journey across Gold Rush–era America.

Lee Westfall has a secret. She can sense the presence of gold in the world around her. Veins deep beneath the earth, pebbles in the river, nuggets dug up from the forest floor. The buzz of gold means warmth and life and home—until everything is ripped away by a man who wants to control her. Left with nothing, Lee disguises herself as a boy and takes to the trail across the country. Gold was discovered in California, and where else could such a magical girl find herself, find safety? Rae Carson, author of the acclaimed Girl of Fire and Thorns trilogy, dazzles with this new fantasy that subverts both our own history and familiar fantasy tropes.

Walk on Earth a Stranger, the first book in this new trilogy, introduces—as only Rae Carson can—a strong heroine, a perilous road, a fantastical twist, and a slow-burning romance. Includes a map and author’s note on historical research.

I absolutely ADORED Rae Carson's Fire & Thorns series. I'd read The Girl of Fire and Thorns before blogging (mid-2012), but read The Crown of Embers and The Bitter Kingdom as they were published. Such an agonizing wait for The Bitter Kingdom! I loved that the series got better with each book. I'm really hoping that the same will apply for this series.

Leah Westfall can sense gold, which is a handy ability during the Gold Rush. No one knows about her ability excerpt her parents - and her uncle who murders her parents and tells Lee they will be heading West, him and her. Lee runs away, journeying to the West on her own. On the way, she joins a family - the Joyners - and a friend who also ran away - Jefferson - and it's not long before Lee feels like she has a place in the group that she's traveling with. But Lee has more secrets than one - she can sense gold, but she's also masquerading as a boy.

Rae Carson has certainly created a unique and rich story, scene, and cast of characters. I haven't read many Westerns, or books set in nineteenth-century United States, in YA. I actually just read Vengeance Road by Erin Bowman, and it follows the EXACT PLOT (except Kate can't sense gold). Parents are killed (parent, in Kate's case), girl goes out on her own, gold is a huge factor in the story. I LOVED Vengeance Road, but I didn't quite love this one.

Still, I was very interested in this story, from start to finish. Despite this book being slightly longer than most YA books (which doesn't bother me!), the story moves at a decent pace. I have a dislike about the pacing actually, but it's a little different (see below). I wasn't bored, even though the plot wasn't terribly fast.

I liked Lee from the start. She is an only child, with no brother, so she does all of the labor that a boy would normally do, including mucking the stables and whatnot. She also pans for gold, since she has the gold sense. Lee takes care of her family, so when her parents are murdered, Lee knows that she can't let her uncle treat her like property. Lee is strong (and not just physically) and brave, brave enough to start her journey to California (from Georgia) by herself.

Jefferson is her friend from Georgia, who leaves for the West before she does, just after her parents are murdered. The pair don't meet up until Lee reaches Independence (Missouri, I believe) with the Joyners. Jefferson is half-white, half-Native-American, and is used to people treating him terribly. He keeps Lee's secret about being a girl from everyone, but he doesn't know about her gold sense.

Overall, I thought the story was interesting, maybe not engaging though (see below). I expect a lot more from the next books, which should be the case, given what I know about the Fire & Thorns series.

My biggest issue with this book is that I felt it was going nowhere. Lee is on a journey to the West, okay. But is that it? It really seemed like that was it. We REALLY get to know the people in the group she's traveling with (the Joyners, but also a few other family, and Major Craven, some college boys, and more). But there is no additional layer to the book. You'd think Lee's gold sense would come back to haunt her at some point, or Uncle Hiram would find her and kidnap her and force her to find gold. I don't know what I was expecting, but I think I expected MORE. This book was so one-dimensional, one-layered.

Not to say that it was boring? But it moved in one direction, and that direction wasn't really anywhere. Going to the West. The end. Is the book about making friends along the way? Golly gee, I really don't think that's what I wanted to read, or expected to read. Given that her last series was a high fantasy one, I think I expected this book to have shenanigans going on.

So I'd say the pacing was slow. Interesting, not terribly boring, but slow.

Also, let's talk about anachronisms. Some of the speech and dialogue in this book were definitely anachronistic. I wish I had bookmarked where I saw these lines, but I didn't want to dog-ear my book! But I distinctly remember thinking, that sentence is way too modern, at least a few times. Not a huge deal, but not a good thing, necessarily.

The ending felt so anticlimactic. I think this goes along the lines of what I was saying earlier, about the story being flat, but the ending felt like nothing really changed? Sure, there were plenty of deaths along the way, but the actual climax and ending didn't seem riveting or anything. It was just there. Just another day in the West. La la la.

Also, isn't it strange that certain people caught up to the group in the West, while traveling? The West is a HUGE place... it seemed way too coincidental. Too convenient.

This last thing I'm going to mention isn't *really* a complaint, but more of a comment for those like me who enjoy a good romance alongside a story - the romance isn't really a thing in this book. Sure, there are seeds, but not happens, nothing is going on. Just seeds. Please water them in the next book, Rae Carson. Knowing what I know about the Fire & Thorns series, I'm sure that will be the case.

Despite not loving this one, I'd recommend it! It's fun to read different genres, and Western historical fiction is definitely one that I don't read nearly enough. Granted, there aren't that many published in YA lit. Me reading two Westerns in one year is impressive, let alone two in two months! Even if you don't like Westerns, give this book a shot! I think things will pick up in the next book.


3 stars. I hope to see more related to Lee's gold sense. I hope to see more once Lee and the gang reach California and tuck in. There needs to be more to the plot, because right now, this story isn't meaning much to me! Still, I am interested in the next book, as I trust Rae Carson.