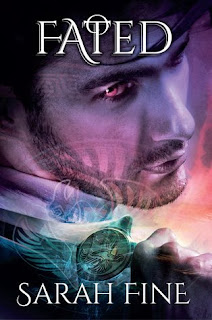 Aislin Ferry and Jason Moros have only days until they will be called to account before the Keepers of the Afterlife. Yet as they race to restore order and make their case, their worlds fall into total disarray.

Mutiny within the fractured Ferry family threatens Aislin’s hold on power and role as Charon. Meanwhile, the fearsome Lord of the Kere has family trouble of his own. Someone is unraveling the fabric of fate, and Moros suspects one of his supernatural siblings is behind the terrible bid to unleash Chaos.

Now unlikely allies, Aislin and Moros each need the other to escape the wrath of the Keepers. As the stakes rise, it becomes clear that protecting their respective empires is not the endgame. With the fate of all humanity dangling by a thread, Aislin and Moros must surrender completely to one another if they are to fight their common enemy. And as time runs out, someone must make the ultimate sacrifice.

What is this, my NINTH Sarah Fine novel read? Nine of ten published (although technically this book is not yet published). I haven't read Burn, but I've read all of her other published novels. Sarah Fine has yet to let me down! I read Marked in June, Claimed in July, and Fated in August! Each book has been my Pili-Pushed book for each month, so this one is August's Pili-Pushed novel!

Aislinn Ferry has quite the mess to clean up - and figure out. As the new Charon, she is struggling to hold her power and keep the other Ferrys from overthrowing her. She and Jason Moros will be meeting with the Keepers of the Afterlife about the current situation. Rogue Kere, creatures they've never encountered, the reappearance of Rylan Ferry... there is a lot going on, and a lot that Aislinn and Moros don't know. Moros and Aislinn fight protect the Ferrys, the Kere, and the world, from a fate worse than death,

Best. Book. Of. The. Series. Quite possibly Sarah's best book. Of Dreams and Rust was really, really good, and it's probably my favorite YA book of hers. Fated is my favorite adult one of Sarah's. That seems fair. This book broke my heart several times, but in the best, most painful, but best way! Not like Firewalker by Josephine Angelini (which I recently reviewed, hence the comparison).

I'll start with Aislinn. I have to be honest, I wasn't her biggest fan in Marked or Claimed. I didn't hate her, but I didn't immediately like her. She wasn't the nicest to Cacy or Galena or Eli, so I wasn't sure I would like her in Fated. However, getting to read her perspective of things was so helpful. She can be seen as cold, but it makes sense, given the pressure of being Charon, saving the world, etc. I really like Aislinn! She can compartmentalize like a pro, and she is intelligent and prepared for everything, even when she's not. If that makes sense.

Jason Moros! Thousands of years old, yet his Kere (and the world) are slipping through his fingertips, and everyone wants to blame him. I love this guy! He is a bit flirtatious, condescending, hilarious, determined, brave, and fair. Everyone wants to misjudge him and throw the blame on him, but he is a good guy, trapped in a scheme like everyone else.

Aislinn and Moros tentatively decide to work together, and it is a good thing that they do. Aislinn finds herself in incredible danger, in the hands of people that Moros knows well. Moros finds that he cannot help but try to protect Aislinn - something in him needs her to be okay. The two of them are drawn to each other without realizing it, and when realizing. They have good instincts for sensing things, which includes each other.

Which leads me to the romance. While I thought Eli and Cacy would be my favorite pair... I don't know. I think Moros and Aislinn are my favorite pair! I LOVE their interactions, alone or otherwise. They have chemistry from the start, and it's not long before it seems to have turned into something deeper, a deeper connection. Keep in mind, Moros and Aislinn have known each other for years, and have been... interested in each other for years. Maybe not intimately, but they've always intrigued each other. Very different from Eli and Cacy, who meet each other in the beginning of Marked.

The romance is slow-burn and carefully developed, yet red-hot and sizzling at times. I think it's the perfect amount of chemistry, "chase"/anticipation, and intimate scenes, coupled with a high-stakes, high action plot. The romance and chemistry delivers, as readers will find it easy to fall in love with Aislinn and Moros (especially Moros), and root for them until the end.

The plot is quite the roller-coaster! Moros and Aislinn never, ever catch a break. There was one point in the book when I had to put the book down, because there was something sad happening. Sarah Fine knows exactly how to break my heart yet keep me coming back. No matter how heartbreaking one scene was, the next one would have my heart racing. Seriously though, if you ever reach a point in the book where you're like no, this is too much - keep going! The plot is very fast-paced, but not overwhelmingly so. More so in a way in which you can't stop reading, the pages won't flip fast enough!

Speaking of overwhelming... that ending though. It totally came at me like a ton of bricks. Or a ton of cake. Cake is nicer than bricks. I totally saw one part of the end coming! The ending is soooo not what I expected specifically, but I couldn't see it any other way. Sarah Fine totally blindsided me with who was behind the corruption of the Kere and Rylan Ferry and whatnot! Great job! The ending was overwhelming in a book hangover kind of way - a very satisfying ending, not bittersweet! Trust me, you will love the ending, regardless of what type of ending you prefer!

I can't think of many dislikes! Perhaps I should mention that one rough spot I hit and had to put the book down for about twenty minutes - but then I picked it right back up. It was about a third in, so just be warned that while you might struggle with this part, like I did, keep going! It got better, and quickly.

I would recommend this book, especially out of all the Servants of Fate books! Not that I don't recommend Marked or Claimed. But I really, REALLY recommend this one. Adult romance readers, urban fantasy readers, Sarah Fine readers, anyone looking for a fun, heart-pounding, sexy read... this is a good one!

5 stars. A rare five stars from me! Though I think I've rated two romance novels with a five-star rating in the past month or so! That's a lot for me. But this one (and When a Scot Ties the Knot by Tessa Dare) is a really great one! Sarah Fine never lets me down. When is her next adult romance novel scheduled to be published?! I need more!