Blog Tour Review and Giveaway: Playing for Her Heart by Megan Erickson

Welcome to the blog tour for Playing For Her Heart by Megan Erickson! I absolutely loved this book, and soon you'll find out why! Read my review below, and proceed to BUY THIS BOOK ASAP :D 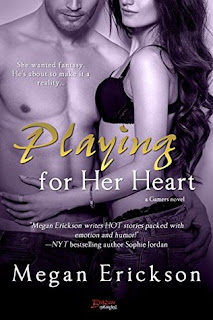 Grant Osprey just had the hottest sex of his life. Sure, they were both in costume, and yes, it was anonymous, but he never expected her to bolt in the middle of the night without so much as a good bye, let alone exchanging numbers. Or names. All he’s left with are her panties and some seriously X-rated memories...until he meets his business partner's little sister.

Only Chloe Talley isn't the bold, sexy vixen he remembers. And she wants nothing to do with him.

Cosplay is Chloe’s only chance to leave her boring, socially awkward world behind. To forget that she’s failing at life and can’t be with anyone, let alone a single-father like Grant. But the raw hunger between them is undeniable. With him, she can be a misbehaving maid. A sexy call girl for hire. Each scene pushes Chloe beyond her strict boundaries, until Grant demands the one character she can't play.

Whew, this book was hot! Steamy, sexy, on fire, whatever you want to call it. I didn't read the first book in the Gamers series, Changing His Game. Apparently, Austin and Marley were a HOT couple. They make some cameo appearances in this novel. Still, even though I didn't read Changing His Game, I am no stranger to Erickson's books, and I KNEW I would love this one!

Grant Osprey loves cosplay - and so does Chloe Talley. The two of them meet at ComicCon in full costume, and a steamy night ensues. But Chloe can't have more than one night, because she doesn't think anyone would want the real Chloe, the computer-loving nerd who is weighed down by guilt, about how her sister died. But when it turns out that Grant is one of her brother's partners in business and best friend, Chloe can't hide. She doesn't want the sexy nights to end but... she doesn't want Grant to know who she really is.

I know next to nothing about cosplay - I recently saw a Try Guys Buzzfeed about the Try Guys' experience with cosplay, and that was when I really started to understand what it was. Yup, I'm not much of a gamer. But I love how well Erickson did her research and/or knows her stuff! She made it easy for people like me to understand feel comfortable in the world of gaming and cosplay. That was a relief because the first scene is literally a bunch of gaming cosplay references, and I was about to panic because I didn't know anything about cosplay!

Chloe is such a likable woman. She and I are different, yet so similar. I could totally relate to her nerdiness, her love of gaming (translated to my love of books and sci-fi), our shared love of dirty romance novels (hehe), and our internal shyness. Although I think she is a little more shy than me. ALTHOUGH when she is in character, girlfriend is a naughty brazen wildcat.

Grant is such a swoony guy! He's thirty-two and ripped, because his fourteen-year-old daughter bakes like Betty Crocker. I'll get to the child bit in a second. Grant is hot and dirty-talking and persistent and dedicated, and continues to give Chloe attention even when she pushes him away. He is sweet and kind, yet steamy and smoldering, just be being a living person. He works hard to keep his company alive with Ethan, and he works hard to be a great single parent. Grant is quite a catch!

USUALLY I don't read books in which one of the love interests has a child already. Not my thing. But it's Megan Erickson... and in any case, I think this plot arc really worked. Sydney is fourteen, not four, which I liked. Grant had a one-night stand his freshman year of college (do the math - he's thirty-two, she's fourteen, makes sense that he was eighteen at the time), and didn't want his partner to have an abortion. So he (and his parents) took care of Sydney until he graduated and was on his feet. Sydney plays a pretty significant role the rising action of this book, which actually really worked!

The romance. The chemistry. The steamy scenes. Holy. Guacamole. Erickson blew me away with the steaminess of this book! The chemistry between Grant and Chloe is off the charts! The first hawt scene was suuuuper fan-your-self/stick-yourself-in-the-freezer hot, and Erickson does not let up throughout the book. Grant knows his way around a woman - and Chloe knows her way around a man! I'm still fanning myself.

The plot is fairly fast-paced - I read this book in one sitting! The book is a bit short, but of course I would want more Grant and Chloe. You'l fly through this one in no time! I love that about Ericksons' books - and Brazen books in general. So fulfilling, enjoyable, and satisfying! You'll always get a HEA, guaranteed. Cue the happy sigh!

TOO SHORT! I wanted more relationship development, and of course, more steamy scenes. But mostly relationship development. I feel like Grant and Chloe never really "talked" or got to know each other on a personal level (basically any level besides physical). There was ONE TIME when they hashed out feelings, but it was way too close to the climax. Hence why I think this book was a bit short!

I LOVED this book, and would totally recommend it! All the Brazen-published books are worth reading, because of the steamy romance and satisfying HEA. But there are certain ones that are above and beyond in everything, and this is one of them. So, so good! I will read anything Erickson writes! If you're looking for a quick, steamy romance novel, look no further!

4.5 stars -> rounded down to 4 stars (this didn't feel quite like a 5-star novel). This book is definitely worth reading, buying, and rereading! Get to it, romance readers! 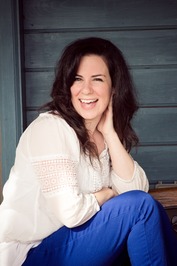 Megan worked as a journalist covering real-life dramas before she decided she liked writing her own endings better and switched to fiction.

She lives in Pennsylvania with her husband, two kids and two cats. When she's not tapping away on her laptop, she's probably listening to the characters in her head who won't stop talking.

This could crash and burn in epic failure. Grant was a thirty-two-year-old man and this was probably a horrible idea. But he couldn’t get Chloe’s green eyes out of his head, the way she kissed him, the way she moved under his palms. And, fuck, the way she tasted… So, he took a deep breath and went for it, knowing this could completely end in Ethan ripping out his heart like in that Indiana Jones movie.

Grant tipped up his lips and narrowed his eyes, adopting the air of a domineering businessman. “I thought I told you that I wanted the entire house finished by the time I got back. I’m not paying you to dance around the kitchen.”

Her chest rose and fell with deep breaths, and Grant waited, on fucking pins and needles to see if she’d play along.

The only sound was the refrigerator kicking on, and he was about to laugh, and tell her he was joking, when her voice, small but gaining power, said, “But, sir, you’re home early.

That sir went right to his cock.
He took a step toward her, smiling when she backed up into the counter behind her. “I’m only a half an hour early, and you have a lot more than half an hour of work to do. What’s your excuse?”

He stepped into her space, plucking her iPod from the waistband of her pants, setting it on the counter along with her earbuds. Her eyes fluttered closed.

“Yes?” he questioned, hands on either side of her, pinning her in.

She opened her eyes, and he stared into the swirling green pool of her irises. She was in the role now; he could feel it. “I’m sorry but I took a nap in your bed.”

Jesus, his cock twitched and he shifted, so the front of his jeans brushed her thigh. “You napped in my bed?”

God, he was going to come in his pants. He ran a hand along the outside of her thigh, teasing the skin under the hem of her shorts. “Is that all you did? Sleep?”

She shook her head.

Her whisper was a lick across his balls. With a grip on her biceps, he spun her around, so she faced the counter. She gripped it with a cry, but didn’t struggle. Instead, she threw her head back and pushed out her ass.

He took the invitation for what it was. He lowered her shorts along with her panties, hooking the fabric under the cheeks of her ass.

He smoothed a hand over it, and reveled in the small moan she made in the back of her throat. “You know I need to punish you, right?”

She nodded, her hair bobbing.

“I’ll go easy on you if you’re truthful with me.”

He squeezed one cheek, then let it go, watching as the blood rushed back to the white areas made by his fingers. “What did you think about when you touched yourself?”

The hesitation was for effect, he knew it. What a little actress she was. She looked at him over her shoulder, smiling coyly and blinking under her lashes. “You, sir. I thought about you and your huge cock.”