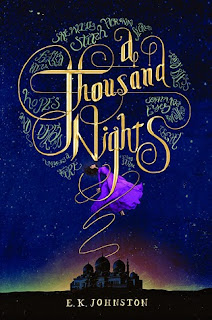 Lo-Melkhiin killed three hundred girls before he came to her village, looking for a wife. When she sees the dust cloud on the horizon, she knows he has arrived. She knows he will want the loveliest girl: her sister. She vows she will not let her be next.

And so she is taken in her sister's place, and she believes death will soon follow. Lo-Melkhiin's court is a dangerous palace filled with pretty things: intricate statues with wretched eyes, exquisite threads to weave the most beautiful garments. She sees everything as if for the last time.But the first sun rises and sets, and she is not dead. Night after night, Lo-Melkhiin comes to her and listens to the stories she tells, and day after day she is awoken by the sunrise. Exploring the palace, she begins to unlock years of fear that have tormented and silenced a kingdom. Lo-Melkhiin was not always a cruel ruler. Something went wrong.

Far away, in their village, her sister is mourning. Through her pain, she calls upon the desert winds, conjuring a subtle unseen magic, and something besides death stirs the air.

Back at the palace, the words she speaks to Lo-Melkhiin every night are given a strange life of their own. Little things, at first: a dress from home, a vision of her sister. With each tale she spins, her power grows. Soon she dreams of bigger, more terrible magic: power enough to save a king, if she can put an end to the rule of a monster.

What was everyone's issue with this book? Before diving into it, I had seen people on Twitter and Goodreads complaining that it was just a pale comparison of The Wrath and the Dawn by Renee Ahdieh, that it was too similar but not nearly as good. Is that so? I didn't find it so at all. A Thousand Nights and The Wrath and the Dawn are both retellings of One Thousand and One Nights, and they are both published in the same year, but they are vastly different. This review isn't meant to be a comparison of the two! It's just that so many other reviewers have been complaining of the similarities, and I want to hopefully dispel that notion!

Lo-Melkhiin has taken a new wife, one that took the place of her sister. Her sister is more beautiful and everyone watches her, but no one watches the second sister. So she does everything she can to stand out, so that her sister will not be taken. And she is. Lo-Melkhiin comes to her that wedding night, and does nothing more than take her hands. She lives one night, and another night, and another. Soon she is queen, but she knows that something is not right with Lo-Melkhiin. He is not the same man who went out in the desert years ago, and returned with cruelty in his heart. She must stop him, and with a power she is slowly discovering, she will fight for her life, before he takes it from her.

We have a nameless heroine! In fact, the only person who has a name in this book is Lo-Melkhiin. There is "Lo-Melkhiin's mother", "wife", "my sister", "my father", etc. I thought this was interesting, and I didn't realize that not even the heroine was unnamed, until the very end of the book. Rarely do you come across books that feature a nameless protagonist!

Our heroine is never afraid of Lo-Melkhiin, because she knows that he could kill her at any time. She goes about her day trying to stay busy with spinning wool, the only thing she is allowed to do. She starts to notice visions, snippets of the future, especially when she is spinning. Her sister, back in the desert, has been praying to her "smallgod", and our protagonist has power. She is strong and unafraid, steadfast and courageous. She is also clever and selfless, and tries to help the others in the palace.

Lo-Melkhiin is another matter. He is not who he appears to be, just like Khalid in The Wrath and the Dawn. Except he is very different. Lo-Melkhiin is having girls killed after marrying them, but his reasons are very different, and not entirely noble. You have to read this one to understand - I feel so bad for Lo-Melkhiin! Yet he is doing every cruel thing we know he is doing.

One of the biggest differences between this book and The Wrath and the Dawn is that this book features no romance. This book is not full of swoons. However, a bit of a romance has potential, with our protagonist. This is a standalone and should remain so, but the ending leads me to believe in a romance. It is sweet!

This book has a darker tone than The Wrath and the Dawn, in my opinion. I rather like this. The protagonist is less known to us, and it's not just because she has no name. She seems very universal. Her love for her sister and family is constant, never changing. Everything she does is for her sister. And Lo-Melkhiin uses this against her. The protagonist does not fear Lo-Melkhiin, but she should. There are some tense moments between him and her, and they scared ME.

So the story is darker, less hopeful, less swoony. None of these things bothered me. I didn't expect a swoony tale from this one, not from the beginning. There are two perspectives; third person, which is our female protagonist, and first person, which is our male protagonist (who is also technically the villain). So you know exactly what is going on in his head. He is definitely as she describes him - a lion, and a viper.

There is much more magic at work in this story, and the story is more dependent on it. I loved this! Our female protagonist has magic, as well as Lo-Melkhiin, and even the sister plays a role in the magic. The magic is so important for the protagonist, especially in terms of the visions.

The setting is so well-crafted! The protagonist is from the desert, and the palace is so different. Her new life is more luxurious and pampered, yet she longs for the desert. The author describes so many stories from the protagonist's life, and while some of them were a bit boring, all of them were rich in detail and meaning.

Overall, I actually really liked this book. It ended really well, and the ending was probably one of my favorite parts of this book. But I enjoyed this book for what it was, and it was NOT a swoony romance. It shouldn't be compared to The Wrath and the Dawn, because it is so different.

I kind of wanted to see an epilogue! It would have made my opinion on one specific thing so much nicer. I loved the ending, but I really like epilogues, to see how the characters are doing. There is kind of an epilogue, but it wasn't the one I was looking for.

I will say, some parts of this book read a little slow. The beginning, when the protagonist is first taken into the palace, for one. However, now that I've actually read the entire book, I can see WHY it is a bit slow at that point, and I can appreciate it. But while you're reading, you might be like, come on, keep going...

Really, I didn't have too many complaints. Forgot about The Wrath and the Dawn for ten seconds, stop expecting swoon, and you will like this book. It's totally unfair that this one is falling to the wayside because everyone thinks it's a shadow of The Wrath and the Dawn! Any fantasy fan can enjoy this one. I know it's not for everyone, and people will still be mad because they want it to be like The Wrath and the Dawn in certain (swoony) ways, but I don't think that's fair at all!

3.5 stars -> rounded up to 4 stars. I'm not saying this is my favorite One Thousand and One Nights retelling, but I AM saying that it is an interesting. Totally different spin on the original, and very intriguing! I'm glad I gave this book a chance.