Welcome to the Bookslapped blog tour for Bounce by Noelle August! The Boomerang series is a fan New Adult contemporary romance series! Even if you're not an NA fan (like me), you might enjoy one or two of these books. Check out book three below! 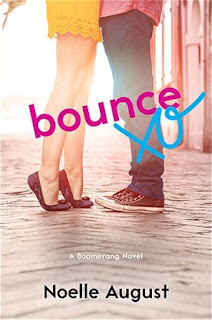 Playing the occasional club gig just isn’t cutting it for twenty-two-year-old cellist Skyler Canby, who’s trying to support herself and her mother back home in Kentucky. Persuaded by her best friend Beth to accompany her on an audition for the first feature film launched by Blackwood Entertainment, she figures why not? Beth’s a shoe-in for the lead, but maybe Skyler’s newly dyed pink hair will help her stand out enough to score a small speaking part.

Never in her wildest dreams does Skyler imagine she’ll land the lead role or that she’ll have her shoes knocked off her feet by the kiss her audition partner, Grey Blackwood, plants on her—a kiss that feels very real and not at all “acted. ”

After throwing a party that causes thousands of dollars of damage to his older brother’s home, reckless musician Grey Blackwood gets roped into working off his debt on the set of his CEO brother’s newest project. Grey spends his days fetching coffee and doing odd jobs around the studio, but he lives for nights when he performs with his band. He knows if he can stay focused, success as a singer is just around the corner. But that’s tough with a distracting pink-haired girl occupying his every waking thought.

Skyler and Grey have every reason to resist each other. But, like a song neither of them can get out of their minds, they have no choice but to go where the music takes them.

Question: What do you get when friends pen a story with heart, plenty of laughs, and toe-curling kissing scenes? Answer: Noelle August, the pseudonym for renowned editor and award-winning writer Lorin Oberweger and New York Times bestselling YA author Veronica Rossi, the masterminds behind the Boomerang series. You can visit them at NoelleAugust.com, @Noelle_August, and facebook.com/NoelleAugustBooks.

Don't miss the first two in the series! Boomerang and Rebound.

Good lord in a basket, it’s him all right. Grey. Illuminated by the golden lights coming on along Venice Boulevard. With suds and water sluicing off his ridiculously ripped body, cascading from his massive tattooed biceps, running down his taut muscled abdomen. His swimsuit sags dangerously low, clinging to his sturdy thighs, making, um, everything, pretty evident.

Probably, this would be a good time to actually speak some words, but even in a town full of hot, hot people, this is kind of stratospheric.

“Yep, it’s me.” Grey reaches back to turn off the shower, which breaks the spell, so I can at least avert my gaze like a decent person. Then he rubs a towel vigorously over his gleaming body and tucks it around his waist.

He has a strange look on his face—peevish, embarrassed, and it feels suddenly like we’re intruding on something. Or maybe it’s just me. I think about that moment in my trailer. His fingers on my skin. My wanting and not knowing what to want.

“Uh, so, what are you up to?” I ask in an effort to win the prize for most obvious question ever. “I mean, I can see what you were up to.” Seriously, Sky? “But, uh, were you just in the water? What brings you out here?”

“I’m crashing nearby. At the garage where my band rehearses.”

Grey looks from me to Mia and then back to me, weighing something. Maybe whether or not he can trust us. He’s got this hot, coiled energy all the time, like he’s always holding back. Like he’s an animal caged inside a human body.

“Just staying there for a few weeks.”

“Because of your mom?” I ask. It was obvious from their interaction on set that there’s some bad blood there, though compared to my mom, she seems kind and thoughtful, whip-smart and curious without being overbearing. Which makes sense, given her offspring.

Then I remember that Grey’s not really her offspring. He said “stepmother,” and the way he said it really answers my question.

Which is good, because he doesn’t actually answer it. Instead, he gathers up his stuff—surfboard, wetsuit—and gives us a grin. “I gotta head out,” he says, as though nothing’s hanging there between us. He looks away for a second, following the path of a guy in an Obama mask as he weaves his way up the boardwalk on a ribbon-festooned unicycle. “Told some friends I’d hook up with them tonight.”

“Wait,” says Mia. “So, you’re just sleeping in a garage? Like on an air-mattress or something?”

“And taking freezing cold showers out on the beach? That doesn’t sound great, does it, Sky?”

“Can’t you stay at a hotel or something?”

He shakes his head. “Money’s a little tight right now. I’m giving Adam almost every penny to pay him back for the house, and I don’t really have…” Again, he goes silent, and I can feel, literally, the tension of him wanting to talk, wanting to say more to someone. Needing it.

“Why don’t you come stay at our place?” Mia blurts. We have that in common. The blurting thing. “I mean, I’m just about all moved out, so there’s room.”

But I can’t say anything. I can’t tell my best friend, who knows I’m talking to Brooks, starting to maybe, sort of, think about where that could go, that having Grey in my apartment, so close all the time, is a very dangerous, very bad idea.

Grey shakes his head. “Nah, I appreciate it, but I’m cool here. I promise. Thanks, though.” He takes a few steps toward a squat gray building with weather-beaten shutters and a tiny, shed-like garage in the back. “I’ll see you guys tomorrow.”

“Hang on,” says Mia, pulling me along. She gives me a look, tipping her head in his direction, like she’s tapping me in for the debate. “You’re cool with it, right, Sky?”

My words disappear, though, because Grey’s pulled up the garage door, the muscles of his broad back and shoulders shifting smoothly as he thrusts the door up along its rusting track.

“See?” he says, pointing to a lumpy white couch sporting what looks like a half-century’s worth of mystery stains—a perfect complement to the funk of beer and weed and sweat potent enough to make my eyes water. “Perfectly fine, right?”

But, like me, he’s lousy at hiding his feelings. Even turned away to shove some empty beer cans into a garbage bag, his body language tells me everything.

He doesn’t want to be here in this musty space, crowded with furniture and audio equipment, the only natural light coming in from the tiny half-moon windows set into the garage door, which faces a dim alleyway.

“You should come stay with us,” I say, surprising the hell out of us both. “I mean, this is…”

I think how different he is from Brooks, who says what he means, tells you—without hesitation—what he wants.

“I paid up on the place through the end of the lease,” Mia says. “You can just chip in on food and utilities. I’m sure you can manage that, right? It’s only for a few weeks. And you’d be rooming with two awesome, super hot girls. How can you say no to that?”

He looks at me, and I can see he’s worried about the same things I am. Rooming together. Being too close, constantly one second away from making a really dumb choice. He’s young and too reckless for me. And a musician, on top of it all. He’s everything I don’t need sharing my space.

But something tugs at me, makes me put all of those concerns aside. I see it in his smoke-gray eyes, which are so alive, so deep and full of thoughts. Some pain or fear lives there. Something that makes it so hard for him to accept. To take a simple kindness. It’s not just about me but about trusting. Anything.

Seeing that, I can’t let him spend another night in this crappy place. Just…alone.

“You should come home with us,” I say. “It will be…a lot better than this, I promise.”