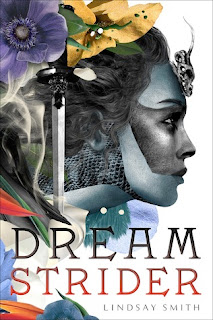 A high-concept, fantastical espionage novel set in a world where dreams are the ultimate form of political intelligence.

Livia is a dreamstrider. She can inhabit a subject's body while they are sleeping and, for a short time, move around in their skin. She uses her talent to work as a spy for the Barstadt Empire. But her partner, Brandt, has lately become distant, and when Marez comes to join their team from a neighborhing kingdom, he offers Livia the option of a life she had never dared to imagine. Livia knows of no other dreamstriders who have survived the pull of Nightmare. So only she understands the stakes when a plot against the Empire emerges that threatens to consume both the dreaming world and the waking one with misery and rage.

A richly conceived world full of political intrigue and fantastical dream sequences, at its heart Dreamstrider is about a girl who is struggling to live up to the potential before her.

I enjoyed this book, much more than I (collectively) enjoyed Sekret and Skandal! I had seen some bloggers read Dreamstrider very far in advance (I'm only a little over a month ahead!), and they were having difficulty getting into the story, or couldn't get into it at all, or were very confused throughout the novel. I personally did not have any of these issues! This could be for a number of reasons, but meh, I liked this book.

Livia is a dreamstrider, and the only one to exist. She was taught how to be one, by a professor who has theorems and experiments in the dreamworld. Livia is not a perfect dreamstrider, and often struggles with her ability. But the Ministry pulled her out of the life of a tunneler, and she is determined to prove herself to the Minister and the operatives she works with. Her best friend Brandt is an operative, and he believes in her ability, mission after mission. But Nightmare is creeping into the dreamworld, and a scheme against the Empire could lead to ruin. What to do, who to trust - more is in Livia's hands than she thinks.

I absolutely LOVE how the author creates Livia as a character. Livia does not see herself as a successful, competent dreamstrider. Granted, she is the only one out there, the only successful pupil of Professor Hesse, but she does not think she is good enough. One particular mission is hinted at, time after time, without specific details, and apparently Livia messed up in that one. We get the details of that mission in full later in the book.

Anyway. I like that the author has Livia as a bit of a timid character. Not timid, but unsure of her abilities. She knows she isn't a superhero, despite having a power that no one else has. She isn't confident in her abilities, and does not want to jeopardize anyone or any other mission. Livia is desperate to prove herself, but does not want to fail. I like her! She is very clever, and very dedicated. She does as she is asked of the Minister of Barstadt, and she tries her best.

The secondary characters are an interesting bunch. Brandt is Livia's friend, an operative of the Ministry, and a lord. He is set to inherit House Strassbourg, and as a lord, he must keep up with the nobility, as in balls and marriage and securing power. He is slowly distancing himself from Livia, and not intentionally. Livia has been in love with him since she came to the Ministry, but perhaps it's time to move on. And then there is Edina, an operative, Brandt's fiancee. And Vera, an operative, and someone who antagonizes everyone. Jorn, a former tunneler who is a sort of bodyguard to Livia. It is a lively group of young adults, all unique and crazy in their own way.

I didn't find the story too confusing, though I can see how others would get confused. Everything is NOT revealed upfront, and there are things that are hinted at, but not fully explained. Those same things are explained towards the climax. But for a good portion of the story, you're wondering what Livia is referencing. I didn't find this confusing, because I had a feeling the author would explain these backstory references, as they seemed very important.

So I personally enjoyed the ride. This book is all about spies, and spying on the enemy to see when and how they will attack the Empire. The plot to overthrow the Empire is much more complicated than any of the operatives could have planned. It heavily involves Livia and dreamstriding. The dreamstriding ability is very cool! Basically, Livia can enter the body of a sleeping individual, and take control. This isn't an entirely new concept to YA literature, but still, I liked Smith's take on it.

I will touch on the setting briefly - I love the world-building! It seems like a historical world, as Livia is always in dresses. She was taken from the tunneling class, which is basically the super poor, unwanted economic class who works in the tunnels, chipping away at stone. Brandt is a lord, practically royalty. I love this paranormal historical fantasy ish setting! It's very unique.

Finally, the romance. There is romance in this novel. We know from the start that Livia is in love with Brandt (she explicitly says this to herself in the first or second chapter, somewhere around there). And then his parents sign contracts and arrange his marriage to Edina. So... you'd think that was a done deal. And the summary of this book mentions a "Marez". Notice this is the first time I'm saying his name... that's all I'm saying. I like the romance. There is no love triangle.

This is a standalone, and it ends quite well! A little too well? Perfectly well. It's the journey that counts, and the journey gets REALLY exciting. The beginning might seem slow (though I didn't find it slow), but the next half of the book takes off. I'm quite pleased with this novel!

I can see why others couldn't get into this one. The beginning does take time to get used to, to understand the world-building. I personally didn't mind this, but I do understand why a reader might have difficulty with this. So this is more of an FYI.

Same with the romance - the synopsis leads you to think there is a love triangle going on. There isn't. Though those who are extra super duper ridiculously sensitive to love triangles might be a bit bothered. You all know how particular I am about romance, and how much I HATE love triangles? And I'm telling you that there is no love triangle in this book. So. The idea of one is annoying, but there isn't one.

The ending is super fast. I think I missed one or two things, because the pacing took off like a rocket. I'm not sure I fully understand what happened to the enemy, though I understand the general concept. It seemed too abstract for me, but that could have just been me, questioning everything. And then the book ended really perfectly, so there's that. Good ends are great, but if they're cookie-cutter perfect, then I tend to wonder.

Would I Recommend It;

I liked this book! It's part historical fiction, part fantasy, part thriller? I absolutely love the blend of genres, and the story that Smith has created. Espionage, dreams, romance, war - what more could I ask for? The majority of the book isn't very fast-paced or action-packed, but it is a fascinating story, one that I do recommend to YA fans.

3.5 stars -> rounded up to 4 stars. While I liked Sekret but didn't love Skandal, I certainly enjoyed this one! This is probably my favorite of the three Smith books. And the cover is the most lovely! That is really a plus.