Review: The Shadow Behind the Stars by Rebecca Hahn 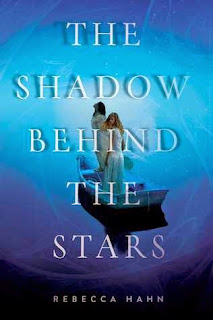 A girl’s dark destiny could cause the unraveling of the world in this spellbinding novel from the author of A Creature of Moonlight, which Kirkus Reviews called “cumulatively stunning” in a starred review.

Heed this warning, mortal: stay far away from the three sister Fates. For if they come to love you, they might bring about the end of the world…

Chloe is the youngest. Hers are the fingers that choose the wool, that shape the thread, that begin it. The sun smiles upon her. Men love her without knowing who she is. She has lived forever and will live forever more. She and her sisters have been on their isolated Greek island for centuries, longer than any mortal can remember. They spin, measure, and slice the countless golden threads of human life. They are the three Fates, and they have stayed separate for good reason: it is dangerous for them to become involved with the humans whose lives they shape.

So when a beautiful girl named Aglaia shows up on their doorstep, Chloe tries to make sure her sisters don’t become attached. But in seeking to protect them, Chloe discovers the dark power of Aglaia’s destiny. As her path unwinds, the three Fates find themselves pulled inextricably along—toward mortal pain, and mortal love, and a fate that could unravel the world.

This book was... strange. It's one of those mystical, magical-realism-esque novels that don't seem to be going anywhere. The plot of this book didn't make sense to me, the story didn't make sense, and yet I couldn't pull myself away. I think I enjoyed the book, though I can't see myself going through it again, and I'm not sure I'd recommend it.

The Three Fates - Chloe, Serena, and Xinot - do not interact with mortals, do not live among mortal, do not interfere in the lives of mortals. They spin, mark, and cut threads. Chloe is the youngest, the one who looks like a young woman, the one whom men find irresistible. Serena is the middle-aged one, and she is the mothering type, though she will never have children of her own. Xinot is the elderly sister, the oldest one, the most intuitive. When Aglaia washes up on the sisters' island, Serena can't turn her away. But Aglaia has a dark future, and the Fates are now involved.

This book is told from Chloe's first-person point-of-view, although it's also told in second person, kind of. Chloe is telling "you mortals" a story, a story of why the Fates shouldn't interfere in the lives of humans. Chloe is NOT happy with Aglaia living with them. Serena is the one that allows it, and Xinot lets it be. Chloe has a strong will and is a bit more temperamental than the other two sisters. While it might seem like she doesn't care about Aglaia at first, she grows to care about her, just like the other sisters.

Aglaia's village was raided by soldiers, everyone murdered, the village burned. Aglaia survived, but the raiders wanted it so. Aglaia is filled with pain, and Serena puts a spell on her to erase her memories. But it doesn't erase the pain. Aglaia has something huge that will change the world, and the Fates are powerless to stop it. They are so powerful, yet so powerless.

The story is very short, yet very dense. If you skim something or flip too quickly, you might miss something vital. It is consuming, the kind of book that confuses the heck out of you, yet you can't look away. The writing is beautiful, lyrical, yet I was totally lost at times, but I couldn't not keep reading. The world is a fantasy, Greek-influenced one, but I couldn't get a firm grasp on it.

While I'm giving this book three stars, I liked the book. The story is SO intriguing (and I can't say much specifically because it gets spoilery really quickly), and the ending is strange but satisfying. I think. If I'm understand it correctly.

But therein lies my problem. This book is one of those gorgeously written book that are confusing as a Rubik's Cube (hush, Rubik's Cube solvers). A lot of fantasy novels that take on a magical realism feel are like this. They are lovely and flowy and pretty to read... but confusing. As a story, this one didn't have much structure, and didn't make sense.

How in the world did Aglaia end up by the Fates? Especially when we find out that the Fates are on an island which other humans live on (this isn't quite a spoiler, I promise). Why didn't she end up there? Why didn't the Fates throw her out? Why did they follow her, why did they stay? I can't say more without spoiling things, but trust me, things don't add up in this book. There is little plot structure. It's like someone is telling a tale but veers off in one direction and attempts to come back to the tale. Or something. The climax rolls around and then I'm even more confused.

The ending is also confusing, but I think I get it and I think I like it? I think there is some heavy symbolism, or maybe I'm reading into it too much. In any case, I think the ending could have been more clear. The whole story, really.

This book is REALLY short. There could easily have been another 100-125 pages in this book. Maybe that would have fleshed out the plot and padded the worldbuilding.

One thing that kind of bothered me - it is very OBVIOUSLY stated, both in the synopsis and in the book, that Chloe is the one that men fall for. Yet, there is NO romance in this book. None. Not even for Aglaia and some guy, or anyone. But especially not for Chloe. I was expecting it, because the author had a line in the beginning stating how men fell for Chloe all the time. Hello, foreshadowing? Likely unintentional, which is annoying!

I actually don't think I would recommend this book. It's interesting, but probably not worth the read. Initially, I was REALLY excited about it! Now I'm happy I read it, but not really singing its praises. If you have it, read it. If not, keep moving along!

3 stars. Not terrible, but not amazing! But hey, it was super short, which almost makes me think I should reread it... almost. I can't quite wrap my head around this one.