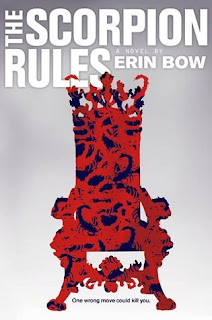 A world battered by climate shift and war turns to an ancient method of keeping peace: the exchange of hostages. The Children of Peace - sons and daughters of kings and presidents and generals - are raised together in small, isolated schools called Prefectures. There, they learn history and political theory, and are taught to gracefully accept what may well be their fate: to die if their countries declare war.

Greta Gustafsen Stuart, Duchess of Halifax and Crown Princess of the Pan-Polar Confederation, is the pride of the North American Prefecture. Learned and disciplined, Greta is proud of her role in keeping the global peace — even though, with her country controlling two-thirds of the world’s most war-worthy resource — water — she has little chance of reaching adulthood alive.

Enter Elián Palnik, the Prefecture’s newest hostage and biggest problem. Greta’s world begins to tilt the moment she sees Elián dragged into the school in chains. The Prefecture’s insidious surveillance, its small punishments and rewards, can make no dent in Elián, who is not interested in dignity and tradition, and doesn’t even accept the right of the UN to keep hostages.

What will happen to Elián and Greta as their two nations inch closer to war?

I think this might be a huge case of "it's not you, it's me". Or maybe it IS the book. I don't know. The ratings on Goodreads are very polarizing (at least, in my mutual friend group - but even outside of that group). To be honest, I wasn't really interested in this book. If the publisher hadn't sent an ARC, I  wouldn't have read it. I don't make a habit of reading unsolicited review copies, but given the massive amount of flailing that people were/are doing over this book, I decided to give it a shot.

I gave this book a shot. It failed. Epically. And to be honest, there is no venom or sting in my one-star rating. I just couldn't think of a single thing I liked. I wasn't overly upset over this one, or disappointed. It was so meh and blah, and I couldn't recommend it to anyone (if you hadn't heard of it before, keep walking).

I know some people liked the beginning but found the ending lacking. And some people loved the ending but found the beginning slow. For me, I found the entire book dry and boring, so there was no one part that I absolutely hated or absolutely loved. I will say, I had an easier time reading the beginning - the first one hundred pages. But keep in mind, this is largely due to the fact that I knew NOTHING about this book before reading it. So the first hundred pages were boring... but I still had hopes that maybe I was just tired, or it would pick up soon.

It never picked up. And I got even more tired, even as I got more awake (I had started this book on a car ride around 8:30 am, but picked it back up around 2:00 pm). This book was draining me, and not because it was so exciting or action-packed or emotionally investing. No, I was bored.

Maybe I never got into the world-building. This book is set waaaay into the future, in which the heir children of royalty are taken hostage, and killed when their parents go to war with another country or territory. It's just the way things are. This wasn't really interesting or intriguing to me. Greta, the protagonist, lives in constant fear of her mother declaring war on someone else.When Elián is brought to the hostage group as a hostage, there is a shift in... something. He is all about escaping and breaking the way things are. He refuses to be a "good hostage".

Something about that alone seems cliche. Of course one day a boy shows up and changes everything. While it's totally true that one action can change the course of history... I just wasn't feeling it, in this book. Basically, I wasn't feeling this book?

I almost DNF after about 150 pages. I skim-read a HUGE CHUNK of the book, at least 100 pages after the 150 already read. I just didn't read it with as much care. I didn't want to DNF, because I still held onto the hope that it would get better. It didn't. I can't say anything about the plot specifically because that would be a call for spoilers but... I didn't really get into the action. Once the hostage situation "disappeared", the book lost its appeal. Not that it had any appeal to begin with (FOR ME).

The romance also killed things a bit for me. There is a love triangle going on in this book. That's bad enough, right? But the thing is, the author has you thinking that the protagonist is going to fall for one person, and spends a lot of page time showing these two making moon eyes at each other or whatever. But then the author introduces another leg in the romance (hence, the triangle), and switches gears. So it's like we're deceived into falling for Greta + person A, because then Greta turns to person B. I honestly didn't care if the person Greta loved was person A or person B. But I don't like falling for one ship, only for the other ship to be the successful one. If that makes sense?

Because the thing is, in this book, I couldn't care less who she loved. Both of the love interests were dull, cliche, and uninteresting. One of them was supposed to be the "bad boy", the new guy, the one who changes the thinking of the protagonist. The other love interest was the steady rock, the best friend since forever. Two very cliche roles, and two very boring romances. Neither was swoony, and I picked the wrong one, the one I liked more. The fact that I had to "pick" is BS (I like it when there is one love interest and one only!).

Are you getting a lot of meh vibes from me? That's because this book was solid meh. I almost wish I could be like, I HATED THIS BOOK UUUUGGGHHH!, because then there would be some passion in this review.

The ending is so confusing! Heck, the whole book is, after a point. Kind of abrupt too, and weird. It gets so weird. I don't know if the author really fleshed out the plot. Like, THREE things happen in this book. Not a lot going on! Which, well, supports the meh feeling. MEH.

And to make matters worse, this book appears to be a standalone. I feel like a sequel would maybe lift my rating a notch, only because at least I could tell myself that some of my confusion and questions could be addressed in another book. Nope nope nope. Not according to this PW rights report!

I really can't recommend this book. It's dystopia, but it's just weird. And not a good weird. A boring weird that doesn't get better. A boring weird that needs a lot of development on all fronts. I don't even know what I read. I skim-read about half of it, which is extremely rare! If you were already excited about this one, then you should definitely read it. If not, skip!

1 star. Really, this rating is reflecting the amount of things I actually liked about this book (i.e. nothing). It's not that I hated everything. It's just that I didn't like anything. If that makes sense. It's all in the subtleties! Or something.