Science in Fiction (#27): Beneath the Shine by Sarah Fine

This month, I'm featuring Beneath the Shine by Sarah Fine! 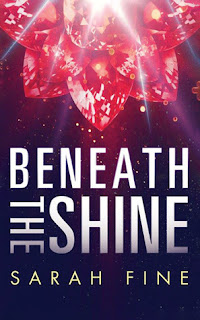 Beneath the Shine review | Other Sarah Fine posts

It is no secret that I love Sarah Fine's books. She has explored so many genres in both YA and adult, and I have yet to be really disappointed. Beneath the Shine is a YA science fiction novel. It is set in a futuristic dystopia world, in which robots are the primary workforce. Millions of people are living in poverty because they have no job, due to the rise of robots.

Today, I'm going to talk about the rise of machines and job loss!

This is a bit of a grim topic, because it is shocking and incredibly real. We all know about machinery taking jobs that are related to assembly lines - that sort of thing, in manufacturing. But machinery is on the rise, technology is on the rise, and there is no stopping the developments. According to CNN Money, there are 5 million fewer manufacturing jobs in the United States than there were in 2000, and this is because of the rise of machinery.

Also from CNN Money is the staggering fact that between 2000 and 2010, 87% of the manufacturing jobs lost were due to machinery (machines becoming more efficient), versus 13% from trade (trading with countries who have more efficient machinery, like China). Sure, efficient machinery sounds great, but that means fewer jobs for hard-working people. And who benefits? The rich get richer, the poor get poorer, and the cycle continues.

And how about robots? NBC News has a lot to say about the future of jobs and robots. According to NBC News, the following jobs might be completely taken over by robots in the future:

Think about any futuristic movie you've seen - Star Wars, for example. C-3PO and R2-D2 are pretty important characters in the series. R2-D2 is basically a "driver" for Luke Skywalker - a copilot, if you will (in Episodes IV, V and VI). And the battle droid army in Episode II (and other Episodes) - perfect examples of robots being soldiers. When Luke lost his hand in Episode V, a droid/robot installed the new new one (a medical robot - doctor).

I have nothing against robots, or development in technology and efficiency. As the human population gets larger, we're bound to seek out the most efficient methods of production, and developments in technology is a great solution. But at the expense of millions of jobs and an exponential increase in poverty? Will governments divert money to support these people who have done nothing wrong, but are unemployed (not for lack of trying)? Time will tell.

What are your thoughts on machinery taking over jobs? Robots replacing humans on those professions listed above, or any profession? Can you think of solutions to the inevitable poverty and unemployment problems that will result?
Posted by Alyssa at 12:00 AM