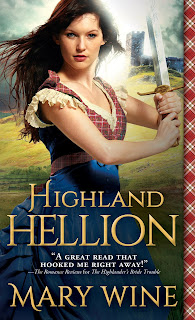 KATHERINE CAREW
Illegitimate daughter of an English earl... Abducted to Scotland at age 14... No family, no reputation... No rules

ROLFE MCTAVISH
Heir to an honorable Highland laird... Can't believe how well tomboy Kate can fight... About to learn how much of a woman she really is

Scotland is seething with plots, the vengeful Gordons are spoiling for a fight, and the neighboring clans are at each other's throats. All it takes is a passionate hellion with a penchant for reckless adventure to ignite the Highlands once more.

In Highland Vixen, we met fourteen-year-old Katherine Carew, bastard daughter of an English earl, who Marcus MacPherson saved from arranged marriage. Six years later, Katherine is a woman now - but she is a woman who knows how to wield a weapon and handle herself against a man. Unfortunately this leads her to a bit of trouble, but it also leads her to Rolfe McTavish. Rolfe saves Katherine but he isn't going to let her go - not when he wants to protect her, teach her a little lesson in Highlander etiquette, and, well, he wants her in general. A stubborn, reckless English girl and an honorable, protective Highlander will take the Highlands - and England - by storm.

At first I wasn't sure if I would Katherine, because she seemed almost too headstrong. She has had too many freedoms granted, in which she knows nothing about running a home or raising children, but she knows more than enough about standing someone with a dagger or fighting them off. In the beginning, Katherine is excessively reckless, almost stupid, and very selfish. But she begins to see the error in her ways, and how set in her ways she has become. She sees how selfish she has been, and how easy she had it. I love that the author made her headstrong, fierce, and stubborn, but eventually, smart enough to recognize when she was wrong.

Rolfe! Rolfe is a sweetheart, and a little different compared to the other heroes of this story. You can see how similar the ladies are - they are all stubborn and tough. But Rolfe is a little different from the other men. Yes, he is an alpha and he is protective, big, muscular, handsome, attractive, and commanding. But Rolfe is also very honorable, and follows a strict code of honor. He refuses to do anything that would dishonor his father, his clan, and his reputation. Rolfe is a good, good man, and he does right by Katherine every single time. He is all kinds of swoony, and not just physically!

I like this unlikely pair! The stubborn, tomboy-ish girl, and the honorable, duty-bound warrior. One is reckless and impulsive, the other is more stoic and occasionally wicked. It's almost an opposites attract romance (pretty much, it is)! From the start, Rolfe and Katherine have a great connection.

The romance is very sexy and swoony and delightful! Like the previous two books, the chemistry hits hard from the start, but unlike the previous two books, the sexy times erupt a little earlier (though not super early - just earlier than in the first two books). I liked this change in pace! Sometimes the romance in books one and two were frustrating, because you kept waiting for the characters to get it on. Rolfe and Katherine fall in lust very quickly, but falling in love takes a little more time. One thing that surprised me was Katherine's nature in the bedroom - I liked that both characters preferred things a little rough. You don't always see that type of chemistry in historical romance.

The story was very engaging and sometimes a little tense. Katherine is captured by the Gordons, then rescued by the McTavishes, but Rolfe has plans that don't involve depositing her to the MacPhersons. But then Rolfe's father decides that he also has plans for Katherine, and so Katherine and Rolfe are back on the road, to England. It's a busy, busy story! An entertaining one, at that. I love how the author has so many Scottish clans interacting (either fighting, or calling temporary truces but still stealing each other's cattle). Part of the story is about bringing peace to Scotland and having the clans cease their warring, and so far, the author is moving that plot along really nicely.

I really enjoyed this third book in the series, despite being slightly wary of Katherine (from the beginning of this book - but that changed)! From book two, I expected her to be paired with a different love interest (her best friend, but he is not interested in her at all), but he isn't even in this book. I must say, Rolfe redeemed himself wonderfully, and I adored him. This book was great!

I can't think of anything specific that I didn't like. Maybe one small detail - calling those in the Lowlands "barbarians"? I always hate when the term is "barbarians", in any context.

If you historical romance, especially Scottish/Highlander romance, you should give this book a chance! The series in general (though maybe Highland Spitfire and/or Highland Hellion - you can probably skip Highland Vixen, though it definitely is good too). This is a really fun and sexy Highlander romance series that I've enjoyed so far!

4 stars. I can't wait to read Highland Flame! We meet the hero of that book in this one - Diocail Gordon - and he is PERFECT. So swoony! I am so excited. Will I like him more than I liked Bhaic? Rolfe? We'll see!