Review: The Last Thing You Said by Sara Biren 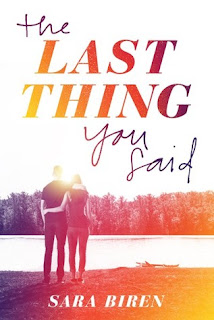 Last summer, Lucy’s and Ben’s lives changed in an instant. One moment, they were shyly flirting on a lake raft, finally about to admit their feelings to each other after years of yearning. In the next, Trixie—Lucy’s best friend and Ben’s sister—was gone, her heart giving out during a routine swim. And just like that, the idyllic world they knew turned upside down, and the would-be couple drifted apart, swallowed up by their grief. Now it’s a year later in their small lake town, and as the anniversary of Trixie’s death looms, Lucy and Ben’s undeniable connection pulls them back together. They can’t change what happened the day they lost Trixie, but the summer might finally bring them closer to healing—and to each other.

YA contemporary isn't usually my thing, and I'd not heard of this book until a few months before its publication. I did a trade with a blogger, and I didn't really need this book, but I wanted to help her with a specific collection of hers, and so I chose this book to receive. I started reading and was a little wary of the story, but I quickly fell in love.

Almost a year ago, Trixie (Ben's younger sister and Lucy's best friend) died, when she was swimming in the lake and her heart gave out. On that day, Ben and Lucy were about to express their feelings for each other. Everything changed, and things were said, and Ben and Lucy never became a couple. They stopped talking, and almost a year later, things are awkward and painful between them. But they can't avoid each other all summer, given that their small lake town is small, and Lucy babysits Ben's five-year-old cousin. It's been almost a year, but Ben and Lucy's connection hasn't diminished, even if they have changed so much.

When I started reading this book, I began to feel a little unsure of it. Ben has a girlfriend, and Lucy starts to show interest in a new summer renter. But it's painfully obvious that Ben and Lucy never got over each other, and still care about each other. They never dated, but they loved each other for years, and that wasn't going to go away. Ben "dates" girls and dumps them just as quickly, as part of some sort of weird coping mechanism. And Lucy... Lucy starts to hang out with Simon the renter at first to show Ben that she wasn't thinking about him, but then because Simon was actually a decent guy.

So I ended up not minding the romance being this way at all. Given that Ben and Lucy technically never dated, they don't owe each other anything - especially with how things ended between them. Ben was an incredibly huge jerk who lashed out, and Lucy wasn't having it. The two of them have a valley of heartbreak between them, for two people that never dated.

This whole book is filled with a lot of pain and hurt and angst, and I actually really loved this. It broke my heart, seeing Lucy and Ben skirt around each other and avoid each other, and then snap at each other when they did interact. But the sheer amount of emotion that poured out of this story was staggering, and so well-written.

Ben is at fault for ruining things between him and Lucy, and so you'd think I would furious with him and dislike him automatically. But after reading several chapters in his POV, I didn't dislike him. I was still irritated with what went down between him and Lucy after the funeral, but I also understand him. I get his pain and his coping and his way of dealing with everything (although he takes a much more destructive and eyebrow-raising route than I would). Ben is a moody, brooding type that gets a lot of attention from the ladies, but he's also filled with guilt and self-deprecation, which was sad to see. As stupid as he was in that one moment with Lucy, and as stupid as he was for not trying to fix things for almost a year, I felt bad for him. I liked Ben, even when I didn't.

Lucy is a sweet and quiet girl and unlike Ben, she really internalized her pain, and didn't show people just how badly she was hurting, almost a year after Trixie died. Lucy is a good person and a good daughter. I was cheering for her when she started to hang out with Simon (even though I really wanted to see her and Ben patch things up, and I knew that they would). I think the author was right to include Lucy's relationship with Simon in this story - Lucy didn't clearly see just how in love with Ben she was until she started to date Simon, and realized how unfair she was being, in dating Simon. I liked seeing Lucy grow and mature, even if she dated a (nice) guy who wasn't Ben.

The romance isn't swoony in a traditional sense, because again, Ben is dating a girl at the start of the story, and Lucy eventually starts dating Simon the renter. But keep in mind that this book takes place over three months (or thereabout), and a lot happens in those months. There are some subtle swoony moments throughout the book (between Ben and Lucy), and then there are some actual swoony moments, towards the end of the book.

I loved seeing so many positive relationships in this book. Lucy's relationship with her (new) best friend Hannah is so strong and wonderful. I love how supportive Hannah was, and how awesome she was in general. And on Ben's side, him and his best friend Guthrie have a solid friendship that was good to see. Lucy and Emily (Trixie's/Ben's five-year-old cousin) have a great relationship, even if Lucy is Emily's nanny. Lucy and her parents have their issues, but they work on their relationship through the story. The same can be said about Ben and his parents. Also, I actually really liked Ben's girlfriend, especially when he broke up with her - she wasn't dramatic and over-the-top. She probably knew that Ben was still so in love with Lucy, and she let him go without a fight. No drama!

Overall, I enjoyed this book, probably more than I subconsciously thought I would. I don't usually like YA contemporary that is so gritty and heartbreaking and non-swoony (in a physical sense), but this book was wonderful. It ends very well, so don't worry about that! The ending is a fantastic HEA.

More Ben and Lucy kissing scenes would have been nice!

I recommend this book to fans of YA contemporary. If you're like me and hate messy romances and relationships, this one might not be for you, though I really enjoyed it. It's one of those books that you have to experience for yourself. I could repeat that the romance isn't love-triangle-y at all, over and over, but you'd need to see that for yourself. I really enjoyed the story, the romance, the heartbreak and the swoons.

4 stars. I'll be looking out for more by this author! Usually I am not one for angst-ridden YA contemporary novels, but this book was so good, and very powerful. I made need to reread it in the very near future!